Solidarity in their social struggle,worldwide!! 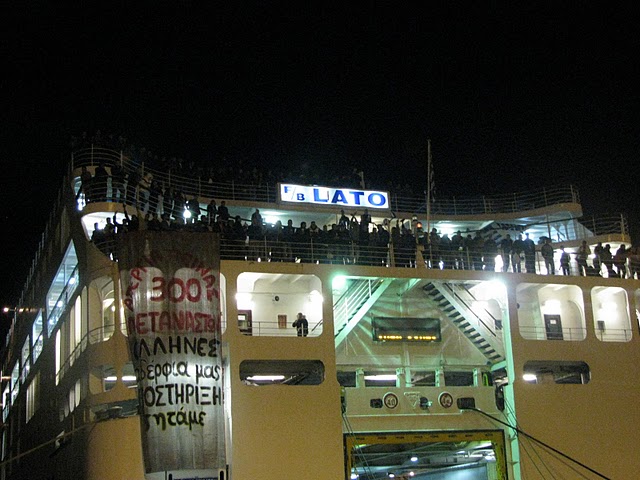 Statement of the assembly of migrant hunger strikers

We are migrant men and women from all over Greece. We came here due to poverty, unemployment, wars and dictatorships. The multinational companies and their political servants did not leave another choice for us than risking 10 times our lives to arrive in Europe’s door. The West that is depriving our countries while having much better living conditions is our only chance to live as humans. We came (either with regular entry or not) in Greece and we are working to support ourselves and our families. We live without dignity, in the darkness of illegality in order to benefit employers and state’s services from the harsh exploitation of our labor. We live from our sweat and with the dream, some day, to have equal rights with our Greek fellow workers.

During the last period our life has become even more unbearable. As salaries and pensions are cut and everything is getting more expensive, the migrants are presented as those to blame, as those whose fault is the abjection and harsh exploitation of greek workers and small businessman. The propaganda of fascist and racist parties and groups is nowadays the official state discourse for issues of migration. The far right discourse is reproduced through media when they talk about us. The “proposals” of the far right are announced as governmental policies: wall in Evros, floating detention centers and European army in the Aegean, repression in the cities, massive deportations. They want to convince greek workers that, all in a sudden, we are a threat to them, that we are to blame for the unprecedented attack from their own governments.

The answer to the lies and the cruelty has to be given now and it will come from us, from migrant men and women. We are going in the front line, with our own lives to stop this injustice. We ask the legalization of all migrant men and women, we ask for equal political and social rights and obligations with greek workers. We ask from our greek fellow workers, from every person suffering from exploitation to stand next to us. We ask them to support our struggle. Not to let the lie, the injustice, the fascism and the autarchy of the political and economic elites to be dominant in their own places too; all these conditions that are dominant in our countries and led us to migrate, us and our children, in order to be able to live with dignity.

We don’t have another way to make our voices heard, to make you learn about our rights. Three hundred (300) of us will start a Hunger Strike in Athens and in Thessaloniki, in the 25th of January. We risk our lives, as, one way or another, this is no life for people with dignity. We prefer to die here rather our children to suffer what we have been through.

SOLIDARITY IS OUR WEAPON!!!

*The following picture is from the immigrants that arrived yesterday in Athens from Crete island in order to start their struggle in 2 days.Most of them will stay in Athens and some more will stay in Thessaloniki.