According to this article 'Peter Black' was deployed against environmental activists from 1993 to 1997, including at the M11 link road protests.

Tim Godwin will have to explain why a Met colleague erroneously told MPs that no ­undercover police were at the G20 protests. Photograph: Graeme Robertson for the Guardian

The first undercover police officer to infiltrate the environmental movement has warned against allowing the Metropolitan police to take over the unit responsible for monitoring "domestic extremists".

Peter Black, who was undercover for four years, said it would be a "terrific mistake" if Scotland Yard were given control of the secretive unit, which has been running spies in protest groups.

He spoke out as the acting head of Scotland Yard was due tomorrow to be summoned to a parliamentary committee to apologise for misleading it over the presence of undercover police at the G20 protests.

Tim Godwin, acting commissioner of the Met, will have to explain why Commander Bob Broadhurst, in charge of policing the G20 rally, erroneously told the home affairs select committee that no undercover police were at the 2009 protests.

The Guardian revealed this month that, contrary to police assurances, PC Mark Kennedy, a Met officer who was undercover for seven years, was present at the London rally during which the newspaper seller Ian Tomlinson died.

Black, a former Met officer, was initially deployed against environmental activists protesting against the M11 link road. His deployment lasted from 1993 to 1997.

Undercover policing has been thrown into turmoil after revelations in the Guardian in the last two weeks, leading to three formal inquiries and admissions from police chiefs and ministers that something had gone "badly wrong".

Concerns have focused on police spies being run by an Association of Chief Police Officers unit not accountable to the public. Control of this unit will now go to Scotland Yard, reportedly to its counter-terrorism command.

Black, who is using the alias he adopted while undercover, said this plan "would be a terrible mistake". This unit started life under the Met and remained that way until 1999. Virtually all the complaints that are now emerging about the use of undercover officers to tackle domestic extremism concern the Met. Black said: "Past experience shows that the Met is simply not accountable enough to take control of this unit. There is a danger that the resource will not be properly managed and that the issues that are raising concerns will continue to do so."

It was while the unit was under the control of the Met's special branch that concerns were raised about the psychological effect of such long-term deployments and whether enough was being done to secure the welfare of those in the field. Black took part in many demonstrations and was attacked by uniformed officers on numerous occasions.

Five undercover police in the protest movement have been identified. Four are accused of having inappropriate sexual relations with activists they spied on, behaviour "never officially sanctioned".

Black, who is the officer referred to as Officer A by the Observer, told the newspaper that undercover officers routinely used sex as a tactic, with the approval of commanders, to glean information.

Meanwhile, protesters blockaded the main entrance to Scotland Yard in a demonstration against undercover police officers having sex with members of groups they had infiltrated.

Anna Jones, one of the 35 protesters, said: "These women were not able to give informed sexual consent."

Alias "Peter Black" was deployed from 1993 - 1997. He was inside the M11 Link road campaign plus active in anti-rasist groups

Good article about him here:- ( confirmed that he is PC "A" by the Guardian in the previous post)


I guess Mark Kennedy will be sueing the police for Post Traumatic Stress Disorder also/.... 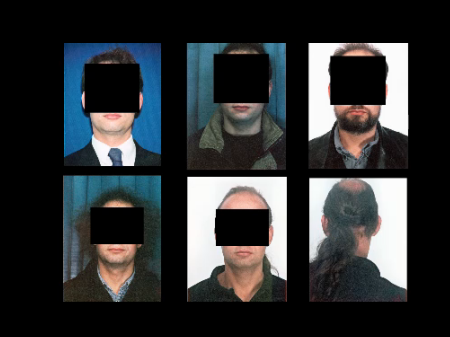 Here are a series of passport photos of "Peter Black" from the Guardian.

I'm confused. The original post links to a Grauniad piece saying the officer in question was was "originally deployed" against "environmental activists" resisting the M11. The obscured pics are clearly of a white guy. The clip linked in the addition is about a cop infiltrated into trot group YAR. It doesn't mention the M11 struggle at all and the guy seems to be black.

Maybe I'm stupid, but there seems to be one too many "officer As" here.

But he doesn't seem to be black to me at all. Were did you get that from? The clips that are darkened are not clear enough to make out about his race, and the clips that show him in light make it clear he's a white bloke. Are you referring to something else?

No idea if the M11 campaign linfiltration is true, there's no real mention of it in the video clip. Think only one 'Officer A' here, just unclear about his link to the M11, but guess it possible.

Well it does say

"At that time, some of the SDS officers were known as "shallow paddlers" because they spent only limited time with their targets. Others, like Officer A, were "deep swimmers" who immersed themselves in the role. During one operation to infiltrate an Animal Liberation Front cell, one officer is said to have lived in a squat for 18 months, virtually 24/7."

Perhaps that was the M11 mole. I pretty sure there were AR people there.

more pics of "Peter Black" from the Guardian video 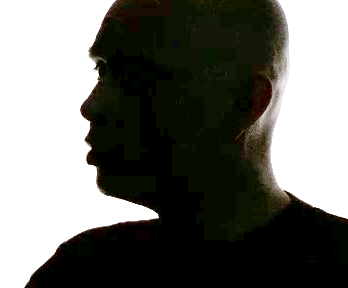 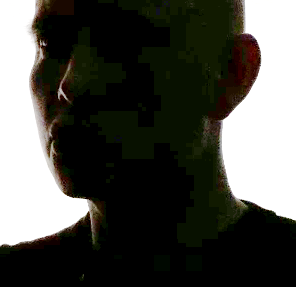 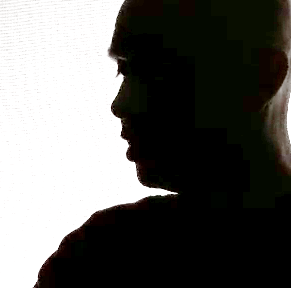 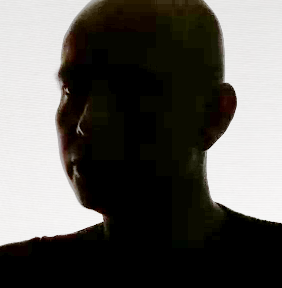 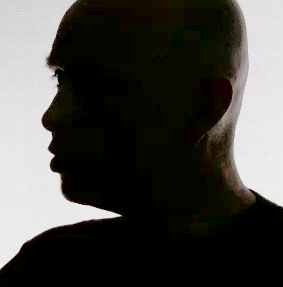 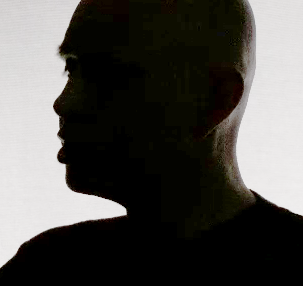 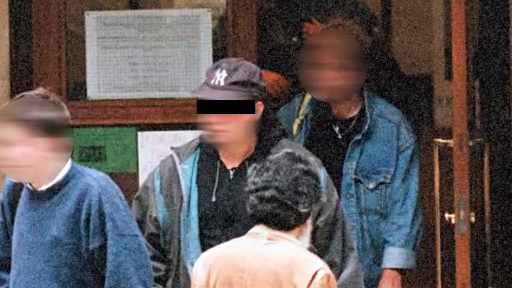 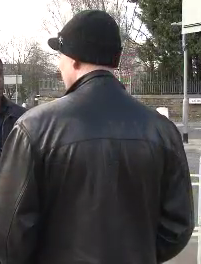 Here are some stills captured from the Guardian video and enhanced a bit by altering contrast, etc.

The video is this one here:

The accompanying article is here:

The black guy in the video is the interviewer, not the undercover cop!

In the video he says he first joined Youth Against Racism in Europe in the Hackney & Islington area and eventually became the branch secretary. He was around starting from the time of the big riot in Welling during the march on the old BNP headquarters.

In the video he seems to have a few misgivings about infiltrating some of the groups e.g. the ones protesting about black deaths in custody.

I'm not sure but he could have a very slight West Midlands accent?

This guy was at Newbury after the trees were gone

This guy was at Newbury after the tree evictions when diggers were getting trashed and when court injunctions were being handed out. I'm sure he came to Gotan, Snelsmore and Spiritual Routes and at one point..

There was a period when we knew we either were under intense surveillance of had an infiltrator or both. We did have some pretty hardcore tunnels, which were eventually filled in and there was a massive police and security operation. For the police to gain control of the tunnels they must have had undercover people in the camp. They also seemed to know who were the really active people, planning actions, storing the hardware.

After one unsuccessful action from which the planners escaped, but 2 of the activists were caught the police offered immunity in exchange for the planners/ others on the action. The 2 arrestees said the police knew exactly who they wanted, I guess they knew, but they couldn't act without exposing their man inside.

Yes, I know the interviewer is a black guy. DOH! Give me some credit! The daylight shots also mainly show a white guy. What made me wonder, however, was the daylight shots outside Kennington cop shop around 8.03. Is that the same guy, and is he white? Same hat and jacket and same voice (but that's been altered, obviously). Perhaps it's the lighting.

If this is the same guy who was allegedly infiltrated into the M11 campaign (anyone remember him?), there is no mention of that here and quite a gap of years between the period covered in the interview and the M11 struggle. An appearance at Newbury would fit better chronologically.

It still looks to me like a fair-skinned guy in the Kennington police station shot at 8:03, and the same as in all the previous shots. They have electronically altered the voice somehow (maybe someone with the know-how can unscramble it!) to make it seem deeper.

The silhouettes show he has quite thick lips so possibly he is mixed race, but then who isn't if you go far back enough?

Yeah, we're all mixed race if you go back far enough. Agree with that.

Not entirely convinced about what I can see on the vid., but I'm not sure enough to argue.

I may have been straining at gnats because other aspects of this are puzzling, especially his alleged infiltration of the M11 resistance struggle. Migrating there from the sort of heavy duty trot circles referred to in the vid., where new motorways were either approved of or said to be "not an issue" at the time, is a bit odd and it would have been hard for the migrant not to stand out like a sore thumb. He would have needed different spiel for different circles.

Nobody involved in the M11 resistance (and there's a lot of them about) has popped up to say they remember this guy. I was only an occasional day visitor there, so can't say.

Anybody remember this guy at the M11?

That campaign was almost certainly infiltrated, like others, but by this geezer?

The M11 campaign really kicked off in Sept 1993 with the taking of a number of squats around George Green, Wanstead. although, let us not forget the many locals who were already resisting eviction in their own homes before that date.

The whole campaign was pretty crazy - lots of squats spread out over a few miles, lots of people coming and going and events like Operation Roadblock that got people coming along for the day and stopping work.

So, lots of opportunities for people to turn up and join in or hang out in squats, without being much noticed or remembered. There were a few Trots from antif-fa and anti-CJA stuff that turned up periodically, so there was some cross over.

That said, some of us involved in the campaign and in doing some of the organising of things like Roadblock, don't remember this guy. My feeling is that if he is telling the truth (and he is a cop, remember) he hung out at squats, maybe sussing out defences for evictions; that seems to have been where a lot of the cop focus was at Newbury.

He may have been at Newbury too - one of the photos looks a little familiar, but none of them good enough to really tell.

He may have been the first from his unit to go undercover in the environment movt, but not the first as such. Hampshire special branch were undercover at demos at Twyford.

Peter Blexley could be his real name?

Is this the real Peter Black?

Peter Bleksley was a founder member of Scotland Yard's undercover unit in the 1980's. He is a director and co-owner of a business intelligence company

Peter Black is not Peter Blexley

PC Kennedy stated last week to activists who bumped into him in London that the undercover Peter Black was the cop in the M11 protests and that his real name was Peter Blexley.

We have found out now that this is not true so the search is still on to find out who Peter Black is. Any leads please send them to us at