Inspired by Tunisian demonstrators, thousands of Egyptian protesters on Tuesday gathered in Cairo and other major cities, calling for reforms and demanding the ouster of President Hosni Mubarak, Al Jazeera's correspondents have reported.The anti-government protesters, some hurling rocks and climbing atop an armoured police truck, were chanting slogans against Mubarak, who has ruled the country for three decades.Downtown Cairo came to a standstill with protesters chanting slogans against the police, the interior minister and the government, in scenes that the capital has not seen since the 1970s. 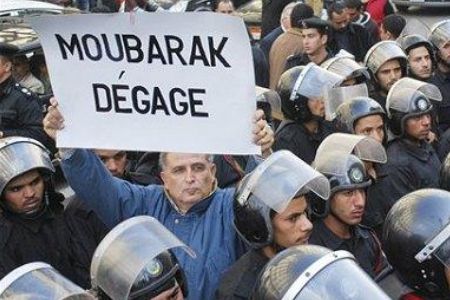 Inspired by Tunisian demonstrators, thousands of Egyptian protesters on Tuesday gathered in Cairo and other major cities, calling for reforms and demanding the ouster of President Hosni Mubarak, Al Jazeera's correspondents have reported.The anti-government protesters, some hurling rocks and climbing atop an armoured police truck, were chanting slogans against Mubarak, who has ruled the country for three decades.Downtown Cairo came to a standstill with protesters chanting slogans against the police, the interior minister and the government, in scenes that the capital has not seen since the 1970s.


Police fired tear gas to disperse thousands of protesters in the capital, Cairo. Several people are said to have been injured. More than 30,000 police have been mobilized in the city centre to launch a crackdown on the protesters. Some have gathered outside the Supreme Court, chanting slogans against President Hosni Mubarak, who has been in power for three decades, and his government. Protests have also been held in other parts of the country, including the Mediterranean city of Alexandria. The events have been inspired by the recent revolution in Tunisia. "Zine El Abidine -> who is coming next?" the protesters shouted. Organizers say it is a day of revolt against torture, poverty, corruption and unemployment. Also ..>>


Demonstrators marched toward what Al Jazeera's Rawya Rageh called the "symbols of their complaints and their agony," the headquarters of the ruling National Democratic Party, the foreign ministry and the state television.
But police responded with blasts from a water cannon and set upon crowds with batons and acrid clouds of tear gas to clear demonstrators crying out "Down with Mubarak'' and demanding an end to the country's grinding poverty.At least 30 people have reportedly been arrested in Cairo, according to official sources.Protests also broke out in the Mediterranean city of Alexandria, the Nile Delta cities of Mansura and Tanta and in the southern cities of Aswan and Assiut, witnesses said.Earlier on Tuesday, Rageh reported from the protests, calling them "unprecedented" in the leniency showed by security forces who allowed demonstrators to march through the capital. The Egyptian government had earlier warned activists hoping to emulate Tunisian pro-democracy protesters that they faced arrest if they went ahead with Tuesday's mass demonstrations, which some labelled the "Day of wrath".
Promoted Online
The rallies have been promoted online by groups saying they speak for young Egyptians frustrated by the kind of poverty and oppression which triggered the overthrow of Tunisia's president. Mamdouh Khayrat, 23, travelled from the governorate of Qalubiya to attend protests in Cairo. He spoke to Al Jazeera's Adam Makary. "We want a functioning government, we want Mubarak to step down, we don't want emergency law, we don't want to live under this kind of oppression anymore," he said. "Enough is enough, things have to change, and if Tunisia can do it, why can't we?" Khayrat added.
Mohamed Ahmed, 36, a demonstrator from Boulaq told Al Jazeera's Makary: "We might be trying to copy what happened in Tunisia. If Egyptians manage to even come close to what they did then I can proudly say today was successful but we still have a long way to do."
"The reaction [to join the protest] has been overwhelming," Rageh said. "The people we have seen taken to the streets today are not the 50 or 60 activists that we have been seeing protesting in Egypt for the past five or six years. These were normal Egyptians, older women, younger men, even children."
A day of revolution
Black-clad riot police, backed by armoured vehicles and fire engines, have been deployed in a massive security operation in Cairo, with the biggest concentrations and likely flashpoints, including: the Cairo University campus, the central Tahrir Square and the courthouse where protesters are said to be gathering. Coinciding with a national holiday in honour of the police, a key force in keeping president Mubarak in power for 30 years, the outcome in Egypt on Tuesday is seen as a test on whether vibrant Web activism can translate into street action.
Organisers have called for a "day of revolution against torture, poverty, corruption and unemployment".
"Activists said they wanted to use this particular day to highlight the irony of celebrating Egypt's police at a time when police brutality is making headlines," reported Rawya Rageh, Al Jazeera's correspondent in Cairo.
"In fact, the call originated from a Facebook page initially set up to honour a 28-year-old man from Alexandria who activists say was tortured to death by police."Witnesses are telling us that there are hundreds on the streets. This is an indication that the protests seem so far to be larger than the usual protests that have taken place here in Egypt over the past few years."
Banned demonstrations

"The security apparatus will deal firmly and decisively with any attempt to break the law," the government's director for security in the capital Cairo said in a statement released ahead of the protests.
Since Egypt bans demonstrations without prior permission, opposition groups say they have been denied such permits, any protesters may be detained.
Habib el-Adli, the interior minister, has issued orders to "arrest any persons expressing their views illegally".
"I tell the public that this Facebook call comes from the youth," Adli said in an interview published by the state-owned newspaper al Ahram."Youth street action has no impact and security is capable of deterring any acts outside the law," he said, adding that he welcomed "stationary protests held for limited periods of time" and that police would protect the protesters.
"Beginning of the end"

"Our protest on the 25th is the beginning of the end," wrote organisers of a Facebook group with 87,000 followers.
"It is the end of silence, acquiescence and submission to what is happening in our country. It will be the start of a new page in Egypt's history, one of activism and demanding our rights."
Rights watchdog Amnesty International has urged Egypt's authorities "to allow peaceful protests".
Protests in Egypt, the biggest Arab state and a keystone Western ally in the Middle East, tend to be poorly attended and are often quashed swiftly by the police, who prevent marching.
The banned Muslim Brotherhood, seen as having Egypt's biggest grassroots opposition network, has not called on members to take part but said some would join in a personal capacity.
Organisers have called for protesters to not display political or religious affiliations at demonstrations. The Facebook page says: "Today is for all Egyptians."
Commenting on the wave of public unrest in Tunisia, Adli, the interior minister, said talk that the "Tunisian model" could work in other Arab countries was "propaganda" and had been dismissed by politicians as "intellectual immaturity"."Young people are very excited, and this time there will be much more than any other time," Ahmed Maher, one of the founders of the opposition youth movement said.
"This is going to be a real test of whether online activism in Egypt can translate into real action," Al Jazeera's Rageh reported.
"Anger has been on the rise in Egypt for the past couple of years, but we have seen similar calls fizzle out. The main difference now is that these calls are coming after what happened in Tunisia, which seems to have not only inspired activists, but actually ordinary Egyptians, a dozen of whom we have seen set themselves on fire in copycat self-immolations similar to the one that had sparked the uprising in Tunisia."
Sympathisers across the world have said they plan to protest in solidarity. In Kuwait, security forces detained three Egyptians on Monday for distributing flyers for the protests, while large demonstrations have also been planned outside the Egyptian embassies in Washington, DC, and London.