They are the most politically marginalized people in this country and across Europe; marginalized in the UK in every other way too, having no legal place to live, unable to send children to school because of police move-ons, and even refused service in pubs and restuarants.

But Travellers today are standing up for themselves and nowhere more so than at Dale Farm, in Essex. Here a hundred families have been under siege for ten years, refused planning consent to live on their own land; though it's only an old scrap-yard converted into a mobile-home park.

Dale Farm Travellers are making a final stand against what they see as an act of ethnic-cleansing equal in its brutality to the clearances of Roma camps in Italy and France. They are asking for your help. 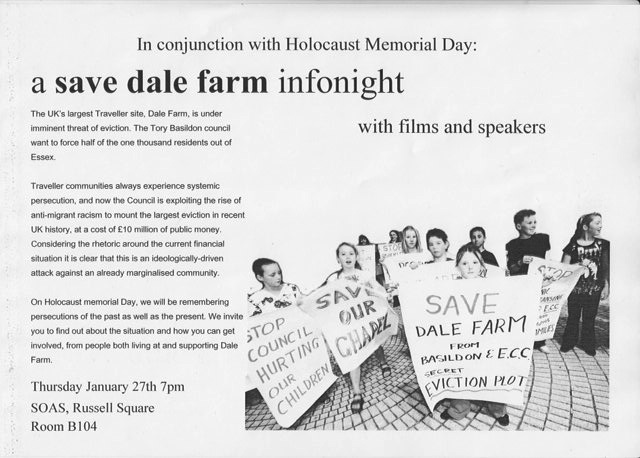 Basildon District Council, champion of the homeless when set up to house bombed-out East Enders, is today a Tory stronghold. And the Tories are bent on getting rid of the illegal Gypsies at any cost.

That cost increases monthly through small-scale evictions and huge legal bills. So far the council admit to spending £2m. But by the time the local government elections come round in May, that figure could have risen five-fold.

Tory council-leader Tony Ball has vowed to clear Dale Farm, which is the largest Travellers' community in Britain. And it will take the biggest eviction operation yet to achieve this, at a cost of a whopping £13m.

Essex police have applied to the Home Office for £10m special funding, just for the policing side, as they expect residents and their supporters to put up stiff resistance.

Already Essex University Human Rights Clinic has pledged to provide a team of legal observers. Meanwhile the Dale Farm Solidarity Campaign is pressing the UK Government to heed two UN requests that the eviction be called off pending provision of acceptable alternative accommodation.

Basildon has offered some substandard council flats to a number of families. But all have refused as the Travellers say they want to stay together as a community and will cling to their traditional way of life at almost any price. If they must move, it would be onto another piece of ground and not into social housing.

The Gypsy Council (GC) is urging Basildon to accept land made available by HCA, the Homes and Communities Agency (one quango not yet dismantled). The GC has itself put in for planning permission to develop a new caravan park on an HCA site for those threatened with eviction.

Within the next few weeks Basildon must decide which way to jump. Most believe that if Home Secretary Teresa May chooses to ignore the UN pleas and stumps up the cash for the eviction, Basildon will send in the bailiffs along with a small army of riot police.

If that happens they could be confronted by hundreds of desperate Travellers, and a good many supporters who believe that this is a case of establishment violence hiding behind a smoke screen of planning regulations - and must be challenged and defeated.

There are no legal vacant stopping places for Gypsies in Essex. Only a long waiting list. But Basildon is ready to drive families out on the road with nowhere to go.