On Tuesday, one of the Yarl's Wood 3, Denise McNeil, was granted bail at an
immigration court in Hatton Cross. Her supporters in the courtroom clapped
as the judge announced his decision. 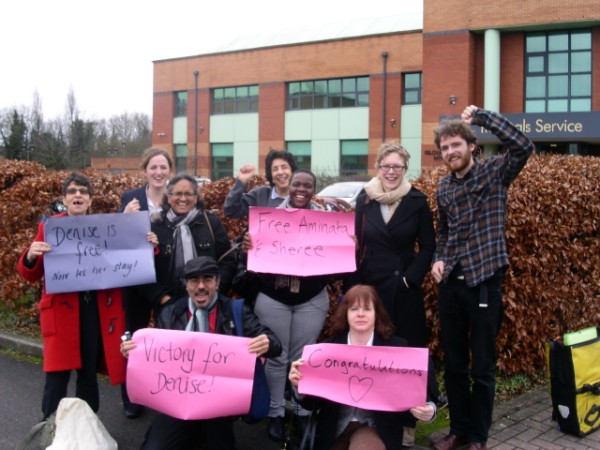 Denise was released from Holloway prison on Tuesday evening. She said 'After 28 months, 1 week and 5 days I am finally reunited with my family and supporters. We're going to keep campaigning for Sheree and Aminata and all the people in Yarl's Wood until it's closed'

In February 2010, refugees and migrants held at the Yarl's Wood immigration prison organised a hunger strike, demanding an end to indefinite imprisonment and abuse. Their courageous protest lasted five weeks, despite violent attacks by Serco's private security guards, who manage the detention centre. Their action was ‘for everyone in detention.’

Over 70 women of colour participated in the hunger strike which forced the authorities to release many of them. In retribution, several people involved in the hunger strike were singled out and moved to prisons. The effect of this is also to intimidate other detainees from speaking out about their experience of the immigration system. After Denise was released two women targeted in this way are still behind bars: Sheree Wilson and Aminata Camara. They are being held without charge and a court order. They have been away from their families, friends and communities for far too long. Supporters say that the campaign to free them would continue.

'We are delighted that Denise has been released from prison today' one of her supporters said. 'We will continue to fight for Sheree and Aminata to be granted bail and for Denise to stay in Britain with her children. When they try to silence people by putting them in prison we will fight back'

Supporters packed the court today to show solidarity with Denise. A letter from Denise's youngest son was also given to the Judge. Denise said 'Tre's letter touched the heart of the Judge'. Several groups were represented including No One is Illegal, No Borders, Crossroads Women's Centre, Communities of Resistance, Stop Deportation Network and members of the RMT.

Sheree Wilson will have a bail hearing on Tuesday 1st February.Your support is very welcome. If you would like to come to the court to show support for her or to get involved in the campaign contact

http://www.ncadc.org.uk/campaigns/DeniseMcNeil.html
Read the recent article in the Observer:

http://www.guardian.co.uk/uk/2011/jan/16/denise-mcneil-yarls-wood
Stay in touch with the campaign: