last friday
Three people were killed and dozens more injured in clashes between police and protesters at an anti-government rally in the Albanian capital of Tirana on Friday, January 21. It was reported by Agence France-Presse . 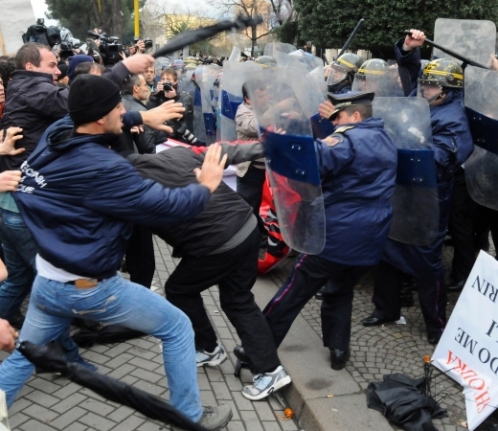 According to The Daily Mail, officials in Tirana said about 22 protestors were injured and 17 police injured in the clashes. According to The Washington Post, the authorities reported more than 130 injured. A source from AFP at a hospital in Tirana reported 55 wounded, among whom, 25 were police officers and 30 were protestors.

The cause of death of three protestors was gunfire. There was no report on whether or not firearms were used. All three died on their way to hospital. At the time, there were no police official reports on the number of deaths. There was no information about exactly who shot the protestors, which resulted in their death. Law-enforcement agencies were reportedly armed with guns, firing rubber bullets at the demonstrators. In addition, tear gas and water cannons were used by the police against the demonstrators.
At the opposition rally, called for because of revelations of corruption in the country's top leadership, some 20,000 people took part, reported The Washington Post. The rally participants called for early elections in the country. The action grew into heavy clashes with police after protesters started to throw stones at police. During the riots, 15 police cars were burned. Observers have called the events in Tirana, the largest and most bloody protest actions in the country over the past few years.