Activists are blockading the Merksplas immigration detention centre in Belgium. Updates through the day on indymedia bruxelles and 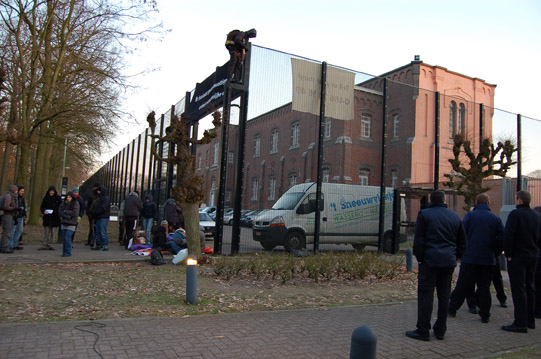 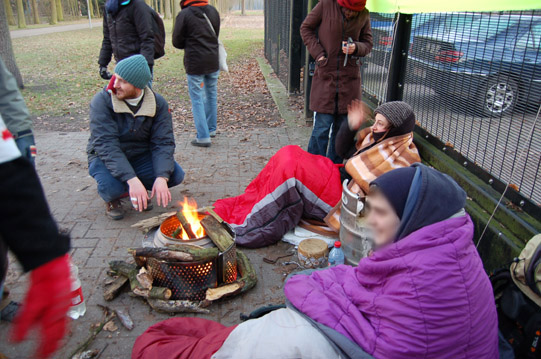 Since early this morning 30 activists have taken action against the Belgian government's imprisonment of undocumented people and closed border policy. They have decided to take direct action to denounce and
directly prevent the application of this policy by blocking the entry doors of the Merksplas detention centre. The activists want to allow the voices of the migrants behind bars to be heard, to spread their stories outside of the walls of immigration prisons.

Ending the isolation of "detainees"

Migrants are rendered invisible, reduced to numbers. Today, activists make their stories heard outside. During the action, they are hanging several banners with phone numbers written on them which detainees can phone to recount their stories. The activists have also thrown tennis balls with messages in order to break the isolation of the imprisoned migrants.

Activists also read the stories of detainees from other detention centres which have been collected in recent months. An African stated: "They are prisons, they are truly prisons, not 'closed centres'! If we say that these are centres, then they need to be like Red Cross centres. But we are treated like criminals. You are barricaded by iron bars!".

The politics of imprisonment and deportation

The closed centre of Merksplas holds 172 men. It is one of six detention centres on Belgian soil. Every year, Belgium deports around 8000 people (including children). An activist insisted: "Our economy is
based on the free movement of capital, whilst thousands of people are denied the chance of living a better life in our country. We imprison them and label them "illegal and undesirable". Our government arrests
these people and imprisons them like criminals, only because they don't have the correct papers. Then they are subject to deportation, a second assault on their dignity and human value. Raided from society, they are sent back to possible death or torture in the countries they came from".

"People are reduced to numbers. We can also note this in recent declarations by the Belgian migration and asylum minister Wathelet, who defends the politics of detention and deportation, and boasts that there have been more deportations in 2010 than in 2008. Behind these figures he is speaking about human lives. Human lives are not to be played with."