Inspired by the Tunisian example, Egyptians take to the streets in their own protest. But can it last? ... The traditional wisdom has always been that Egyptians don't revolt simply because they are an agricultural society. Farmers require stability and patience to tend their land. Farmers also need a strong central government to protect them against natural disasters, such as floods and droughts. Egypt is no longer an agricultural society. 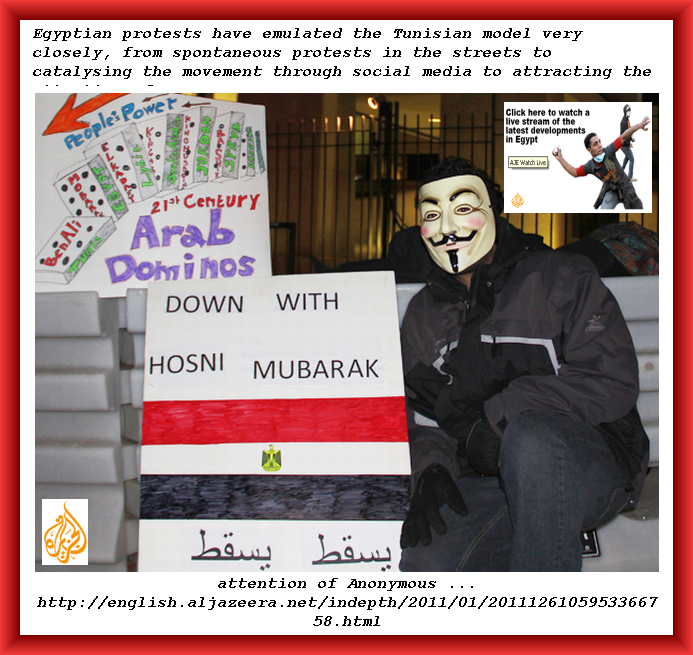 But since the 1952 military led revolution which ended monarchism in Egypt, the country has been ruled by semi-authoritarian national regimes that used the resources of the state, large security apparatuses and a centralised economy led by a gigantic public sector, to suppress political opposition, buy public satisfaction, and build legitimacy for its economically inefficient and politically oppressive government. ........... M O R E:

http://english.aljazeera.net/indepth/2011/01/2011126105953366758.html ......... Still, Egypt is not like Tunisia. Many renowned Egyptian analysts disappointedly noted that Egypt will not follow the Tunisian model because of the low levels of literacy among its population, the spread of apathy and defeatism among its citizens, and the negative role played by religious groups inside the country. In this respect, analysts described Egypt as a country increasingly divided along religious lines, Copts versus Muslims and competing Islamist groups against each other. Still, the events of January 25 will make many rethink their understanding of Egypt and ask again if Egyptians can revolt. Time will only tell.

Live Stream of the LATEST developments in Egypt:

Picture: ....... Egyptian protests have emulated the Tunisian model very closely, from spontaneous protests in the streets to catalysing the movement through social media to attracting the attention of Anonymous ...