The Great Unravelling: Tunisia, Egypt and the Protracted Collapse of the American Empire

The toppling of dictator Ben Ali in Tunisia in the wake of mass protests and bloody street clashes has been widely recognized as signifying a major transformation in the future of politics and geopolitics for the major countries of the Middle East and North Africa (MENA). There is little doubt that the Tunisian experience triggered the escalation of unprecedented protests in Egypt against the Mubarak regime. The question on every media pundit’s lips is, ‘Will events in Tunisia and Egypt have a domino effect throughout the Arab world?’ 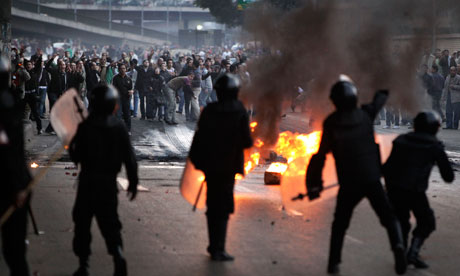 The potential fall of Hosni Mubarak is serious stuff. As The Economist points out, Egypt is “the most populous country in the Arab world”, viewed by the U.S., Britain and West as “a strategic pivot” and a “a vital ally” in the ‘War on Terror’. No wonder then that activists across the world are holding their breath in anticipation that one of the world’s most notorious dictators, and one of the West’s most favoured client-regimes, might be overthrown.

What is happening in Tunisia and Egypt, however, is only a manifestation of a deeper convergence of fundamental structural crises which are truly global in scale. The eruption of social and political unrest has followed the impact of deepening economic turbulence across the region, due to the inflationary impact of rocketing fuel and food prices. As of mid-January, even before Ben Ali had fled Tunis, riots were breaking out in Algeria, Morocco, Yemen and Jordan – the key grievances? Rampant unemployment, unaffordable food and consumer goods, endemic poverty, lack of basic services, and political repression.

In many of these countries, certainly in both Tunisia and Egypt, tensions have simmered for years. The trigger, it seems, came in the form of food shortages caused by the record high global prices reported by the FAO in December 2010. The return of high food prices two to three years after the 2008 global food crisis should not be a surprise. For most of the preceding decade, world grain consumption exceeded production – correlating with agricultural land productivity declining almost by half from 1990-2007, compared to 1950-1990.

So much of the current supply shortages have been inflicted by increasingly erratic weather events and natural disasters, which climate scientists have long warned are symptomatic of anthropogenic global warming. Droughts exacerbated by global warming in key food-basket regions have already led to a 10-20 per cent drop in rice yields over the last decade. By mid-century, world crop yields could fall as much as 20-40 per cent due to climate change alone.

But climate change is likely to do more than generate droughts in some regions. It is also linked to the prospect of colder weather in the eastern US, east Asia and northern Europe – as the rate of Arctic summer sea-ice is accelerating, leading to intensifying warming, the change in atmospheric pressure pushes cold Arctic air to the south. Similarly, even the floods in Australia could be linked to climate change. Scientists agree they were caused by a particularly strong El-Nino/La-Nina oscillation in the Tropical Pacific ocean-atmospheric system. But Michael McPhaden, co-author of a recent scientific study on the issue, suggests that recently stronger El-Ninos are “plausibly the result of global warming.”

The global food situation has been compounded by the over-dependence of industrial agriculture on fossil fuels, consuming ten calories of fossil fuel energy for every one calorie of food energy produced. The problem is that global conventional oil production has most likely already peaked, having been on an undulating plateau since 2005 – and forecast to steadily and inexorably decline, leading to higher prices. Although oil prices dropped after the 2008 crash due to recession, the resuscitation of economic activity has pushed up demand, leading fuel prices to creep back up to $95 a barrel.

The fuel price hikes, combining with the predatory activities of financial speculators trying to rake-in profits by investing in the commodity markets, have underpinned worldwide inflation. Just as in 2008, the worst effected have been the poorer populations of the South. Thus, the eruption of political unrest in Egypt and elsewhere cannot be fully understood without acknowledging the context of accelerating ecological, energy and economic crises – inherently interconnected problems which are symptomatic of an Empire in overstretch, a global political economy in breach of the natural limits of its environment.

Indeed, Egypt is particularly vulnerable. Its oil production peaked in 1996, and since then has declined by around 26 per cent. Since the 1960s, Egypt has moved from complete food self-sufficiency to excessive dependence on imports, subsidized by oil revenues. But as Egypt’s oil revenues have steadily declined due to increasing domestic consumption of steadily declining oil, so have food subsidies, leading to surging food prices. Simultaneously, Egypt’s debt levels are horrendous – about 80.5 per cent of its GDP, far higher than most other countries in the region. Inequality is also high, intensifying over the last decade in the wake of neoliberal ‘structural adjustment’ reforms – widely implemented throughout the region since the 1980s with debilitating effects, including contraction of social welfare, reduction of wages, and lack of infrastructure investment. Consequently, today forty per cent of Egyptians live below the UN poverty line of less than £2 a day.

Due to such vulnerabilities, Egypt, as with many of the MENA countries, now lies on the fault-lines of the convergence of global ecological, energy and economic crises – and thus, on the frontlines of deepening global system failure. The Empire is uncrumbling. The guarded official statements put out by the Obama administration only illustrate the disingenuous impotence of the U.S. position.

While Vice-President Joe Biden insisted that Mubarak is not a dictator, Secretary of State Hillary Clinton and President Obama lamely condemned “violence” and voiced moral support for the right to protest. The slightly muted response is understandable. For the last 30 years, the U.S. has supported Mubarak’s brutal reign with economic and military assistance – currently providing $1.3 billion a year in Foreign Military Financing (FMF). The U.S. Congressional Research Service reports that additionally:

“Egypt benefits from certain aid provisions that are available to only a few other countries. Since 2000, Egypt’s FMF funds have been deposited in an interest bearing account in the Federal Reserve Bank of New York and have remained there until they are obligated… Egypt is allowed to set aside FMF funds for current year payments only, rather than set aside the full amount needed to meet the full cost of multi-year purchases. Cash flow financing allows Egypt to negotiate major arms purchases with U.S. defense suppliers.”

The U.S. also happens to be Egypt’s largest bilateral trading partner. It is “one of the largest single markets worldwide for American wheat and corn and is a significant importer of other agricultural commodities, machinery, and equipment.” The U.S. is also the second largest foreign investor in the country, “primarily in the oil and gas sector.”

Perhaps Biden’s denial of Mubarak’s dictatorial qualities are not that difficult to understand. Since the assassination of President Anwar el-Sadat in 1981, Egypt has officially been in a continuous “state of emergency,” which under a 1958 law permits Mubarak to oversee measures unnervingly similar to the USA Patriot Act – indefinite detention; torture; secret courts; special authority for police interventions; complete absence of privacy; and so on, ad nauseum. Not to mention the fact that inequality in the U.S. is actually higher than in Egypt.

Friends of the Family

Yet ultimately, the U.S. administration cannot absolve itself. Successive State Department Country Reports on Human Rights Practices for Egypt, while still conservative, catalogue the litany of routine police-state repression inflicted on the civilian population over the last decade by Mubarak’s security forces. When asked about the shocking findings of the 2009 report, Clinton herself downplayed the implications, describing Mubarak and his wife as “friends of my family.” So it is not that we do not know. It is that we did not care until the terror became so unbearable, that it exploded onto the streets of Cairo.

Egypt is central among a network of repressive Arab regimes which the British and Americans have actively supported since the early twentieth century to sustain control of cheap oil “at all costs”, as Foreign Secretary Selwyn Lloyd noted in 1956, as well as to protect Israel. Declassified British Foreign Office files reviewed by historian Mark Curtis show that the Gulf sheikhdoms were largely created by Britain to “retain our influence,” while police and military assistance would help “counter hostile influence and propaganda within the countries themselves” – particularly from “ultra-nationalist maladies”. The real danger, warned the Foreign Office in 1957, was of dictators “losing their authority to reformist or revolutionary movements which might reject the connexion with the United Kingdom.”

No wonder then that the chief fear of Western intelligence agencies and corporate risk consultants is not that mass resistance might fail to generate vibrant and viable democracies, but simply the prospect of a regional “contagion” that could destabilize “Saudi oil fields.” Such conventional analyses, of course, entirely miss the point: The American Empire, and the global political economy it has spawned, is unravelling – not because of some far-flung external danger, but under the weight of its own internal contradictions. It is unsustainable – already in overshoot of the earth’s natural systems, exhausting its own resource base, alienating the vast majority of the human and planetary population.

The solution in Tunisia, in Egypt, in the entire Middle East, and beyond, does not lay merely in aspirations for democracy. Hope can only spring from a fundamental re-evaluation of the entire structure of our civilization in its current form. If we do not use the opportunities presented by these crises to push for fundamental structural change, then the “contagion” will engulf us all.