The event, hosted by the University's Jewish society and held in Lecture Theatre 1 of Appleton Tower, was re-arranged only the night before after the International Relations society refused to host Khaldi, due to the fact that Palestinian were living under “Apartheid” 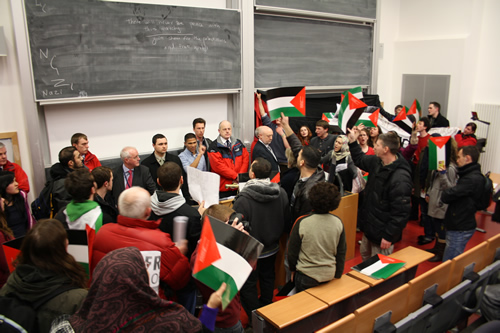 The protesters - approximately 50 people - were the majority of the audience and compromised of students activists, members of the Scottish Palestine Solidarity Campaign and members of the local Palestinian community. The demonstrators proceeded to occupy the platform of the lecture theatre and chanted slogans such “From Cairo to Ramallah, globalise the Intifada”, “Boycott Israel” and “From the river to the sea, Palestine will be free”.

University security soon arrived but the peaceful demonstration continued unabated for a further 45 minutes until Khaldi finally got the message that he was not welcome and left the lecture theatre. The majority of the people present in the lecture theatre had made it clear that they were not interested in listening to Israeli propaganda.

Earlier in the day, Edinburgh University Students for Justice in Palestine (SJP) hosted US Iraq war veteran Mike Prysner who spoke of the link between US Imperialism and the suffering of the Palestinians. He urged the students present to fight against imperialism and for justice in the Middle East.

President of Edinburgh University SJP, Liam O'Hare, said “We sent a clear message today that those who come to our University to represent an Apartheid state and to defend the dropping of white phosphorous on children are absolutely not welcome. Khaldi works for the openly racist Avidgor Lieberman, a man who has called for the execution of Arab members of the Knesset 1(Israeli Parliament). The recent leak of the 'Palestine Papers' has proven beyond any doubt that Israel does not seek peace and that it is purely a colonial settler state which seeks to indefinitely oppress the indigenous Palestinian population. We will continue to protest events where representatives of a racist state are present and fully support the global campaign of Boycott Divestment and Sanctions against Apartheid Israel until it abides by international law”

President of the International Relations Society, Ledys Sanjuan, said “The IR society had a long discussion about hosting Ishmael Khaldi. At the end we came to the conclusion that providing a platform for a representative of the Israeli state would be at the expense of the millions of Palestinians who live under Apartheid.”

Should have let him speak

Would it not have been better to listen and debate during the time for questions rather than prevent people speaking you don't agree with? If the roles had been reversed no doubt Indymedia would have been filled with angry posts.

You state the majority of people "were not interested in listening to Israeli propeganda" So don't go along then if you can't find the decency to argue your position. Perhaps if you had let him speak it might have challenged your own views - were you afraid of that?

These people prevented a propagandist and apologist for an Apartheid state. Let's face it, the guy is a hack. Would you suggest that debating a propagandist for 5 minutes at the end of his speech could possibly result in anything "constructive"?

These people did a damn good job of keeping apartheid israel's token arab off their campus and the majority of the people at this action were students. I was after all actually there.

Some people think we should have let him speak, I heard what he had to say to the people protesting his presence, a couple of his priceless one liners were: "you're not palestinian" "I'm not a muslim" "this anarchy is what prevents peace"


Frankly I was shocked at the sheer lack of intelligence and tact demonstrated by Mr Khaldi.

And for the record, he was NOT at risk during this demonstration, the fella was flanked by TWO mossad agents and security staff were present before he arrived.

No free speech for war criminals.

We do not allow the racist and anti semitic English Defence League and British national Party to speak, nor do we allow apologists for the war crimes of Israel to speak. When there is free speech for all in the future Palestine/Israel secular state, we will welcome that nation's academics, trade unionists, feminists, and many others to universities, colleges and community centres, just as we welcomed South Africans of all races after the collapse of Apartheid. Forward to the end of Israeli Apartheid!! Gordon Davie

Mr Arkush said: "Dr Waldron said to me 'we can never let what happened, happen again'.

"Edinburgh is now working on ways to prevent incidents like this happening in the future. The Board, and UJS, will play an important role in this process."

Mr Abraham and JSoc members also held a meeting with student union representatives and the university's chief chaplain to voice their concerns.