@banbarkawi: This is not a war between sects, nor religions. This is a war of the government against its people. 02/02/11

The rapidly unfolding events in Tahrir Square now stand irrefutably as the result of an act of state repression that is at once inherently insidious in nature, but blatant in its staging. The fact that the initiation of attacks and violence in Cairo came at the behest, under the control, and in the interests of a state mechanism attempting to crush its people, is not incidental to the situation, nor is it a complexity of chaos for history to reveal and make sense of at a later date. It is inherent to the reality of the situation – it is the situation itself and everything that is happening stems from that.

Yet despite the constant stream of reports from both paid journalists, and Egyptian demonstrators, on the ground, either immediately, or later, verified in photos, video or witness statements, that first exposed and consistently reaffirmed the truth of today’s events; the reporting of major news channels has, throughout the day, become more and more a passive journalism of the uncertain. 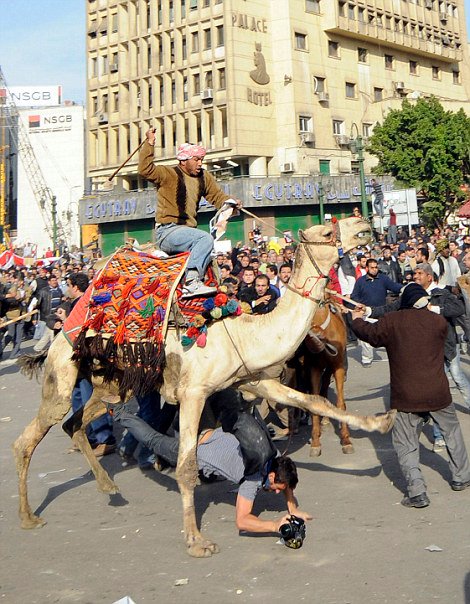 For those concerned with the neo-liberal co-option of the Egyptian revolution into US backed colonising-by-’democracy’, this could be seen to ring as a sinister and depressing warning shot.

The consistent and self-perpetuating use of the non-committal, de-legitimising language of ‘alleged’, ‘claimed’, ‘supposed’, echoes around the major media outlets, creating a cacophony of subjective information chaos in which nothing is allowed to stand as irrefutable fact, other than the basic premise that there is violence in Egypt, and all of that violence is of the same ilk, and inherently counter to change.

These ideas and their supporting rhetoric provide fertile ground for the wading in of imperial power. It is exactly the mainstream and corporate media’s inability, or unwillingness, to distinguish between conflict and repression, to identify power and what it looks like when it manifests itself, that breeds the confusion, insecurity and eventual apathy that allow all this century’s wars, occupations and state-led injustices to proceed unquestioned, as so much background noise.

As the US toys with cutting off aid, and the World Bank muses aloud over its role in the new Egypt, this form of reporting creates ideal conditions for any actions or decisions that can be heralded as a return to calm, to order, to stability; the very confusion of the reporting taken as a reflection of similar confusion on the ground. Because in the eyes and ears of the mainstream media, and those watching it, this is no longer a revolution. It is a ‘volatile’, ‘increasingly tense’, ‘disorderly’ situation, one that can be dispensed with immediately by a return to order and ‘stability’ in whatever form.

This ensures, even unwittingly, that the uprising is no longer afforded the political legitimacy that would define attacks against it, particularly by the state, as repressive, counter-revolutionary violence. The repressions that led to the need to rise up in the first place are no longer important, indeed even mentioned, in the face of violence that is still being claimed as the Egyptian against Egyptian civil war-precursor of a country that cannot look after itself; so who cares if the ‘solution’ to the violence in the streets tonight is undemocratic, repressive, everything that Egypt’s people are fighting against? That is now a secondary issue.

And in orchestrating this situation, the Mubarak regime, and indeed any who would seek to follow him in his repressive exploitation of Egypt, has the world exactly where it wants them; detachedly describing a situation that is about politics, but has been completely depoliticised.

Today, Al Jazeera English stands as a shining example of this; even managing to ignore the content of its own footage in generating its analysis. Throughout the day, the channel provided reasonably events-based, realtime rolling news coverage. (Odd readings of the situation did included the channel’s incredulousness at the army’s inaction over the violence breaking out in Tahrir Sq, despite its own information suggesting that the army had made a very conscious and active decision to let several separate waves of the Mubarak mob enter the square in the first place). Once digested into ‘The News’, however, events that AJE itself had earlier been reporting were either ignored, or awkwardly wedged into an analysis couched in the neoliberal semantics of equal conflict, of order and disorder, of egalitarian ‘clashes’ between groups.

In doing this, AJE has created a logically unviable framework by which to understand what is still happening in Cairo’s streets; a framework based on the idea that groups of similarly motivated citizens are managing to fight out the legitimacy of their leaders in proximity to, but unaffected by, a supposedly already powerless government.

Which doesn’t make any sense at all, a point nicely illustrated by a live interview in which an AJE analyst managed to wonder aloud how Mubarak could be wielding any power in the situation in Tahrir, after he’d announced that he would remain in power until September, followed by a peculiar exchange during which she and the reporter discussed simultaneously the likely-hood that the Mubarakites in the streets are ‘ordinary Egyptians’, and the well known fact that the staging of civil unrest and street violence by paid mercenaries and agent provocateurs has long been a staple of the Mubarak regime.

Al Jazeera’s coverage may be uncensored, but showing and seeing are not always the same.