We Are All Egypt!

Rightly proud of their history, Egyptians like to announce, especially to other Arabs, that Egypt is the world’s mother. The Arabic version is far more tender and poetic 'Misr Um el Dounia'! Light-hearted banter will often ensue between Egyptian and non-Egyptian friends when that statement is brought into the conversation. Today, I think every Arab will concede that, indeed, Misr Um el Dounia! 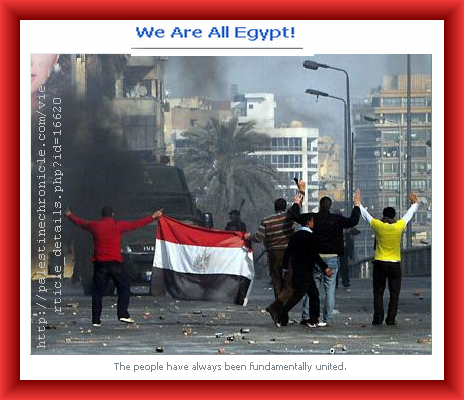 We are all Egypt!

The culture that is a pillar of history itself is, once again, unfurling a new era and, as one revolutionary protestor said, “the world before January 25th is not the same after January 25th”. With such spectacular passion, courage, endurance, and undaunted will, the people of Egypt are ushering in a new world order in the Middle East. Everyone, apparently except Hosni Mubarak, knows that Hosni Mubarak is finished. But his ousting is not merely the end of one Arab tyrant. The awe-inspiring unity of voice and purpose of Egyptians is the realization of an old Arab dream, one for which songs, poems and anthems have been written and sung in every Arab home for generations. It is the dream of liberty, an end to colonialism and its aftertaste that lingers throughout these ancient lands. It is the dream of self-rule and unity among peoples of the Middle East who share a common destiny. .......... M O R E:

http://palestinechronicle.com/view_article_details.php?id=16620 ............. El Abtal, the revolutionaries, did not budged and their nonviolent demonstrations have resumed with the same awesome unity and order. Even some of those individuals who were paid to rally for Mubarak, have changed sides to join their countrymen in Tahrir square. Millions without work or school, of all faiths, of all economic backgrounds, are standing shoulder to shoulder, sharing food, water, praying together, listening to Egyptian songs between calls of the Adan, chanting, and restoring their dignity as a free people.
There’s another saying in Arabic that doesn’t quite translate into English. But I’ll give it a try: The people of Egypt have raised the collective Arab head. “Awlad Misr byirfa3o ras el Arab kolohom!” In other words, Egyptians inspire us all and fill our hearts with pride and love and hope.

- Susan Abulhawa is the author of Mornings in Jenin and founder of Playgrounds for Palestine. She contributed this article to PalestineChronicle.com.
If you like this article, please consider making a contribution to the Palestine Chronicle.

My Father Was a Freedom Fighter: Gaza's Untold Story ........ The frontline in the conflict between Israel and the Palestinians, Gaza is constantly reported as a place of violence and terror. Ramzy Baroud's memoir explores the daily lives of the people in that turbulent region: the complex human beings -- revolutionaries, mothers and fathers, lovers, and comedians -- who make Gaza so much more than just a 'disputed' territory. At the heart of Baroud's tale is the story of his father who, driven out of his village to a refugee camp, took up arms to fight the occupation while trying to raise a family. ..........