Original article with pictures at

This is part of a series of post from CairoRising

CairoRising post first hand reports from an anarchist perspective from the Cairo uprising, in solidarity with the direct action of the people of Egypt against state repression.

Drawing together grassroots and alternative media coverage from the Egyptian rebellion and creating a forum for calls to global solidarity. 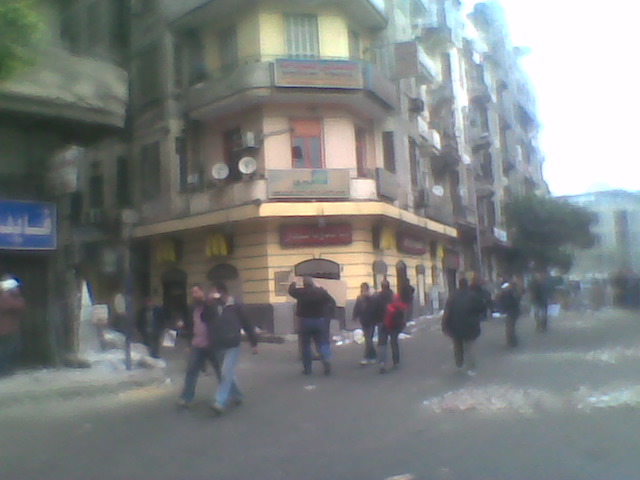 Trashed branch of Mcdonalds close to the barricades in Tahrir Square 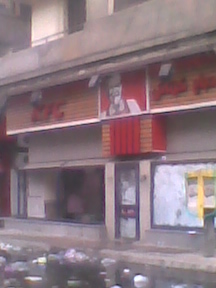 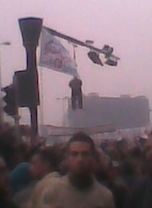 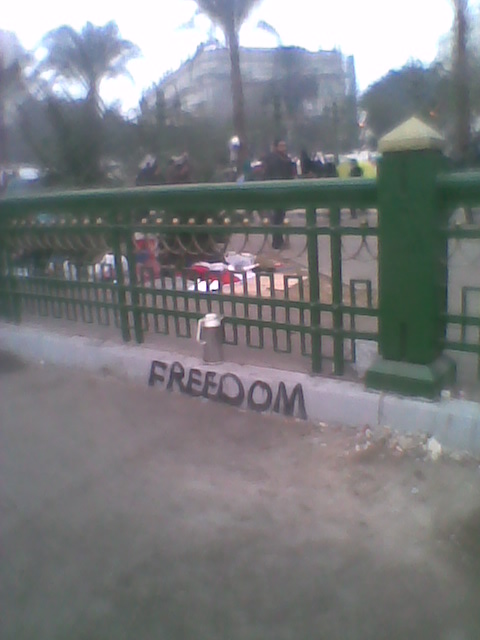 The writing on the wall in Tahrir Square 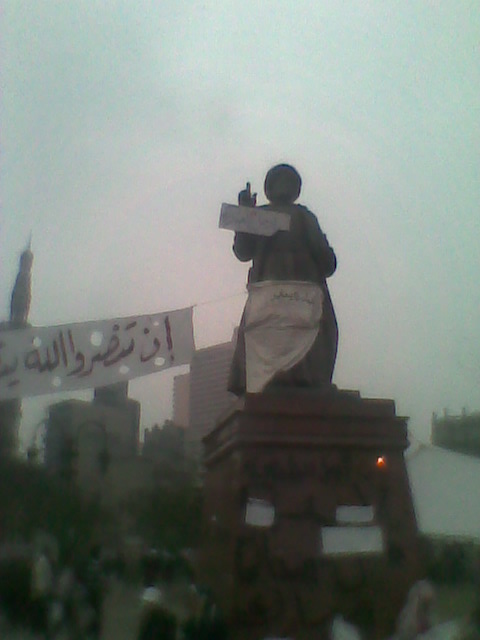 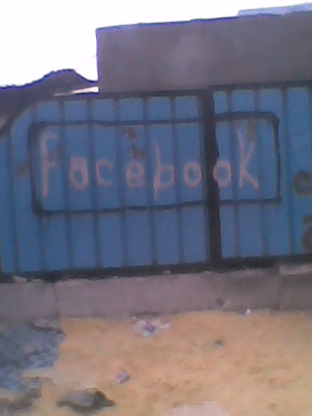 After having had a rather complicated time trying to reach Tahrir Square yesterday – for the demonstration that the people had dubbed the ‘Day of Departure’ which saw two million rebels gather in Tahrir throughout the day- we had better luck today. The atmosphere in Cairo was distinctly different: a walk down 6th October Bridge on Friday afternoon had proved a constant struggle, with groups of volunteer neighbourhood teams, highly paranoid of international infiltrators demanding to see your passport every few meters, then telling you to turn back. Today, however, these groups were nowhere to be seen. The military, who have previously gone to great lengths to keep foreigners out of the demos were still out in great force but to our surprise appeared to have given up on hassling the few internationals left in the city.

The general atmosphere was markedly different too, the curfew had been relaxed to 7pm-6am, the army were being less restrictive on people’s movement, cars were driving on the street and a women and children were more apparent in Downtown.

Along the Corniche life seemed almost normal. People were gathering together to clear up the streets, despite the massive but passive army presence and the burnt out police building. It was only when we reached the road that lead to the main checkpoint for Tahrir Square that you could sense the tension in the air.

Several hundred protestors were queuing up for entry to the square and more were pouring over the bridge carrying bags of food and clutching Egyptian flags. After a few unsuccessful attempts to strike up conversations with people, one Egyptian man explained that it could be bad for individuals to be seen talking to internationals. Groups of Mubarak supporters, who were increasingly being kept out of the protest area but were still clearly creating a sense of intimidation, were positioned near the front of the queue. The army were not making it easy for people to access the square.

We decided to try to access Tahrir Square another way, walking through the side streets around the square to the far side. A couple of days ago being an international in Cairo had got us arrested but today it got us through checkpoints that we later realised were not passable for Egyptians. We walked through several military checkpoints and found ourselves in deserted streets under complete army lockdown, watched over by tanks and APCs. Dozens of banks along the side streets, including a branch of Barclays, had been smashed up and burnt out and the roads were lined with torched police vans.

We approached Tahrir Square from the East, two of the entrances to the square were controlled by teams of volunteers who had built substantial barricades to protect the crowd from attack. We passed through two of these barricades, which were divided into entrances for men and for women and crewed by around twenty people each checking IDs. Behind the barricades were dozens of piles of bricks, defences in case of a repeat of a full scale attack like the one last Wednesday evening.

At the entrances to the square were branches of McDonalds, Pizza Hut, American Express and Kentucky Fried Chicken which had been smashed to pieces and burnt out. The destruction from the previous eleven days seems to be remarkably well targeted with police and government targets and symbols of capitalism and US imperialism destroyed while local shops remain untouched.

Once inside Tahrir square – at least for the moment more or less controlled by the people - talking to Egyptians became a lot easier than on the outside. Instead of avoiding the gaze of foreign supporters, many protestors seemed both willing and interested in debating current events, and even eager to get their side of the story heard by as many people as possible. There was a festive feel in the air, people were dancing a sound system played loud tinny music and people were chanting “Mubarak its time to go”. The crowd was diverse, including a lot of women, children and whole families. “The situation is not at all as it is represented in the media” one young muslim woman came over on her own accord to tell us, “this uprising has the support of so many people, both Muslims and Christians. We are together. Much of the Western media wants to represent us as people from the middle ages, they focus on the man in the beard and the woman in the hijab [pointing with a smile at her own headscarf] but this is not the revolution of the Muslim Brotherhood, it is the people’s uprising.”

The importance of autonomous element of the situation was something that shone through in most conversations throughout the day. We spoke to a group of young men who had come from Alexandria to join the protest and had slept out on the square for well over a week. “Wednesday night [when the camp was violently attacked by plain clothes police and people claiming to be pro-Mubarak demonstrators] was the worst night of my life”, one of the young men told us with a big smile on his face “but being here has been the best time of my life”. “Whatever people say, there are no leaders here”, he continued, “the square and the uprising belong to the people”.

So what did the young participants on the demonstration feel it was all about and what did they want it to achieve, we asked? “It is both a rebellion against the dictatorship of Mubarak and a protest against poverty and the lack of opportunities, especially for young people” the men answer. “The educated middle classes would say that gaining freedom is the aim and the poor uneducated people will say that it is about being able to make a living. But these things are the same. Only when we get our freedom will we be able to improve our lives ourselves”.

The young demonstrators told us that the rebellion in the square, starting with the mobilisation on the 25th January, had been organised through Facebook. ‘Facebook’ and ‘Twitter’ were daubed on walls around the square alongside ‘Down with Mubarak’.

From what we saw the situation on Tahrir provides a shining example of grassroots organising in action. Apart from the community barricades which were manned by both male and female volunteers there were also at least three makeshift, constantly staffed medical tents set up in the square complete with shelving units and donated medicines. These tents have been much in demand, many of those in the square are wearing bandages or have their arms in slings.

Hundreds of tents and shelters have been set up around the square and more were being set up as the sun went down.

At various points around the square protestors had gathered easily accessible piles of stones for people to be able to defend themselves through the night, when the people camping out frequently come under violent attack.

The sense of calm in Cairo, the easing of the curfews and the decrease in intimidation from government stooges is designed to lure the population into resuming business as usual. There are rumours that the banks will begin to open and the roads in downtown Cairo will be passable for traffic, one or two people said that they thought the occupiers would leave soon. The military occupation of Cairo is both frustrating and terrifying and the state is making efforts to tempt people with a way out, saying ‘stop the protests and return to work and we will make some changes’. Disinformation and rumours are rife with Al Arabiya TV mistakenly reporting that President Mubarak has stepped down as Chair of the ruling party. The government message is that the state has listened to people’s anger and that things will change, if people do not believe this lie then the threat of more repression is emphasised by the battalions of tanks occupying the capital.

However, on entering Tahrir Square it is as if a fog of repression has lifted; for the people of Egypt, many of whom have never known anything but a brutal, stultifying military dictatorship, to have claimed and held a space like Tahrir, bringing downtown Cairo to a standstill, has sparked a new sense of freedom all over the city. Gone are the guarded and fearful conversations, afraid of who is listening. Here everyone is a dissident and it is the norm to demand the impossible. Even the ubiquitous undercover police and government agents have been beaten in the square. The looks of genuine elation on the faces of the Tahrir Square occupiers say it all. Here is a moment when change is possible…

Interview with an egyptian anarchist.

An inteview with an egyptian anarchist in Cairo:

audio available if you click the red part of the text.