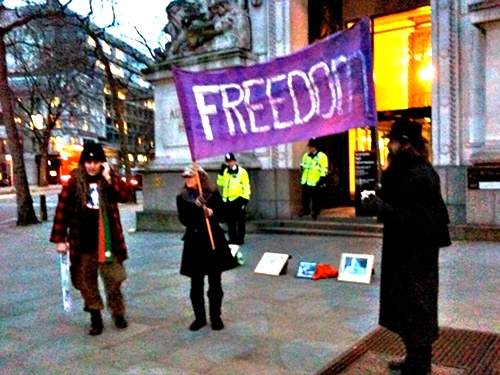 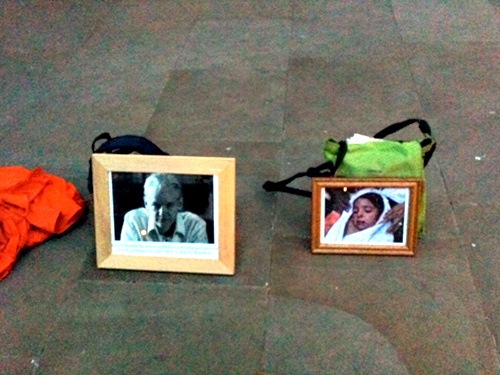 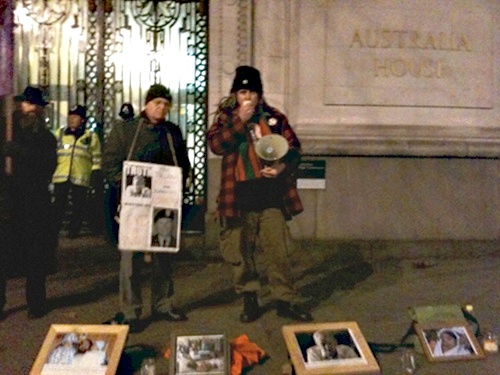 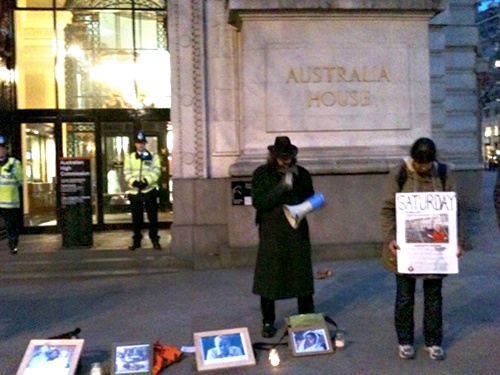 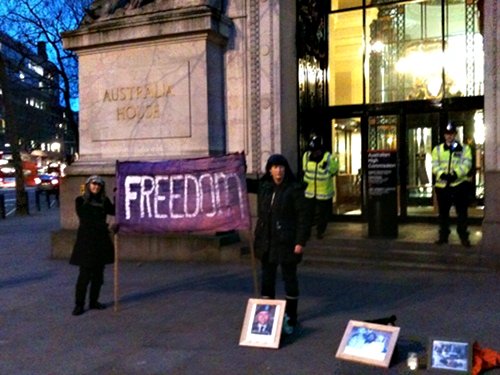 Story to be published shortly....

Solidarity activists form Adelaide, Aotearoa/NZ, Brisbane, Chicago, London, and Melbourne returned to the Australian High Commission on the Strand on Friday night (F4) to demand that they lift their game and advocate for the civil rights of Australian dissident and founder of WikiLeaks Julian Assange. The Australian government continues to service the U.S. invasion of Afghanistan and co-operate in the persecution of anti-war dissidents. Assange faces an extradition hearing in London this Monday and Tuesday (Feb 7 & 8). He was initially denied bail after self surrendering in Kentish Town poice station in December. Opposition to bail came from the British government, in sevise to the Americans, rather than the Swedes who seek his extradition. Assange is presently electronically tagged and living under a curfew.

Interaction with armed embassy security police and two others were fine.

http://www.bradleymanning.org/ presently being tortured in Quatico Marine Base in Virginia, accused of providing WikiLeaks with the colateral murder video

- Shaker Aamer, www.cageprisoners.com a long term London resident who has spent close to seven years in Guantanamo. Shaker's wife and four children, the youngest born after Shaker was sold for a $5,000 bounty by Afghan warlords in 2001 to the U.S. military

- Julian Assange facing an extradition in London on Monday Feb. 7th and Tuesday Feb. 8th at Woolwich Courts (conveniently attached to Categoray A Bemars Prison) and threats from the U.S. to his life and lifelong liberty in relation to the work of WikiLeaks.

- Catholic Worker Scott Albrecht, a former member of the U.S. Air Force, spoke about Bradley Manning and on his own recruitment into the U.S. military, the tactics of cultivation and seducement employed on young working class people by miltary recruiters.

- Fr. Martin Newel reflected on London Catholic Worker attempts to support Bradley Manning and his family in Wales. Bradley's mother who has suffered a series of strokes recently was visited by the F.B.I. in her Welsh village. Amnesty International have finally taken up the case 7 months into prison conditions that can only be described as torture. It is the U.S. government's hope to break Manning to deliver Assange.

- Dr. Ray who works with the poor in Africa spoke of the theft of the world's resources form people in need carried out daily by the world's military.

- Ciaron O'Reilly, a former anti-war prisoner of the United States, spoke of coming from the police state of Queenland, Australia where Julian Assange was raised and where civil liberties were denied on a daily basis. He described the Queensland state government's attack on free speech as Julian was growing up in the lat '70's/early'80's and the 4,000 arrests of peope who in the face of fear continued to leafet, gather illegally, march, speak out, picket and vigil. He observed how this repression would have been a backdrop for Julian's passion for free speech. He also reflected on the endurance of Bradley Manning (5'2, 105 lbs.) and the failure of the anti-war organisations, anarchist scene, church communities and human rights NGO's and movements to support these three men - Shaker, Bradley, Julian who may spend the rest of their years in jail for opposition to these wars on the people of Iraq and Afghanistan.

John from Aotearoa provided unaccompanied song throughout the gathering. A number of foks gathered declared they would make their way to Woolwich Court/ Belmarsh Prison on Monday and Tuesday to stand against the extradition of Julian Asange, demand the freedom of Shaker Aamer and Bradley Manning and an end to the war on the peoples of Iraq and Afghanistan.