The Save Shaker Aamer Campaign (SSAC) held a vigil outside Downing Street on Saturday 5 February at midday to mark nine years of Shaker Aamer’s illegal detention without charge or trial at Guantánamo Bay. Around 40 people attended and were joined by Jean Lambert (Green MEP for London) and Kate Hudson (Campaign against Nuclear Disarmament – CND). 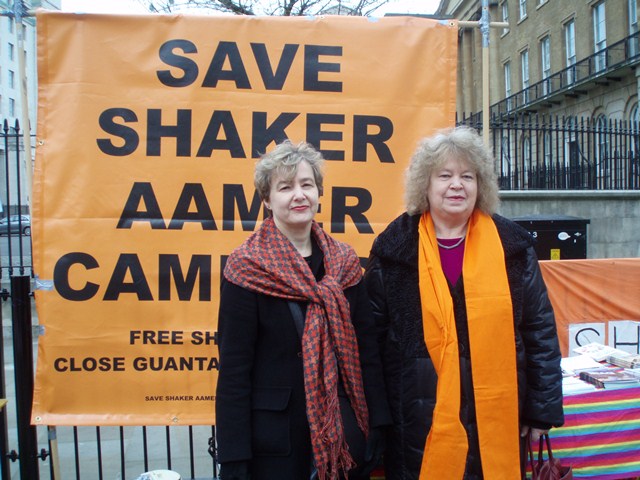 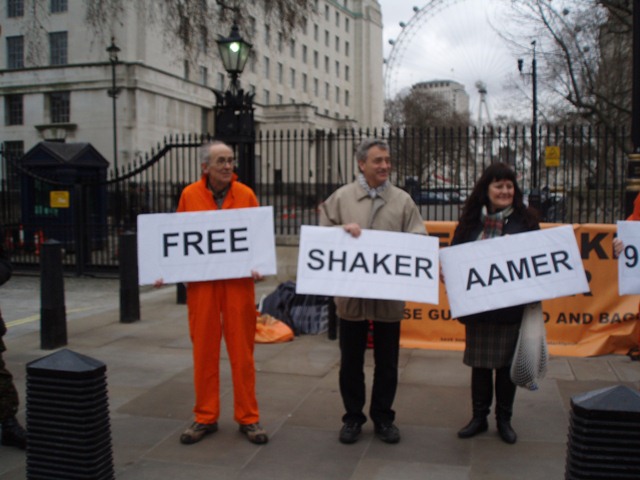 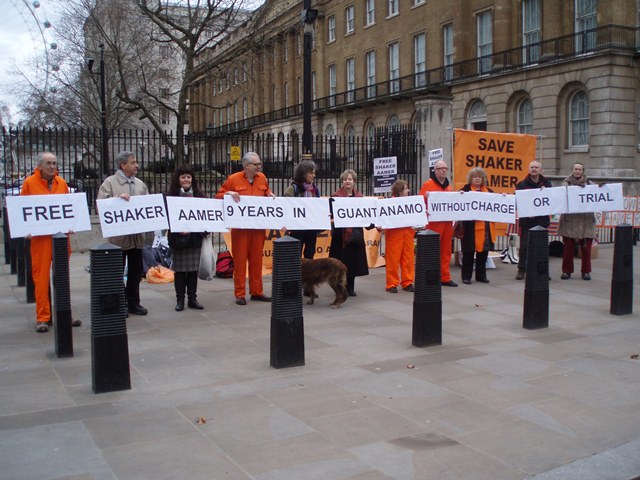 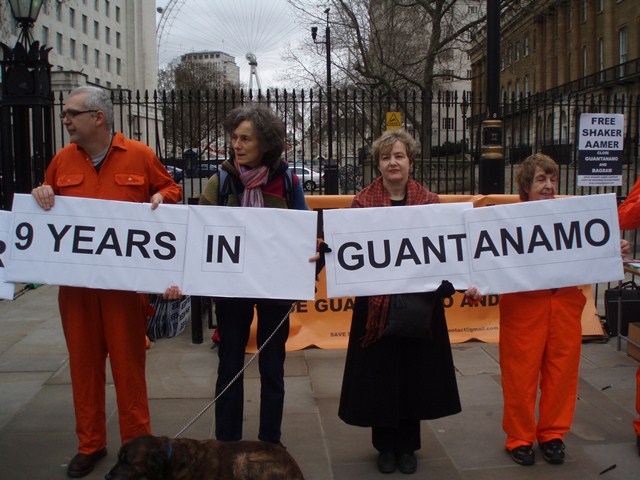 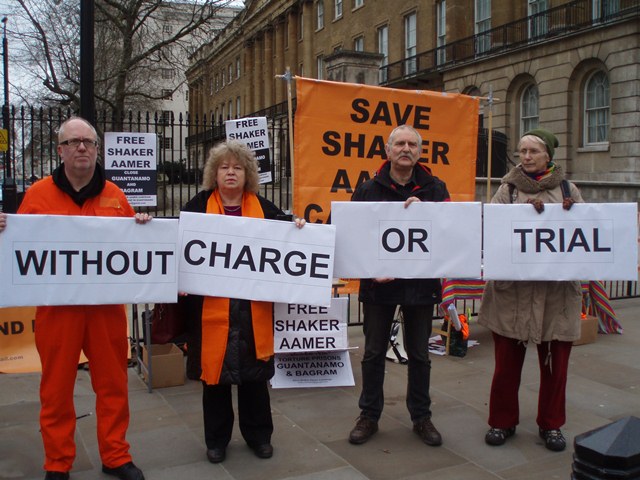 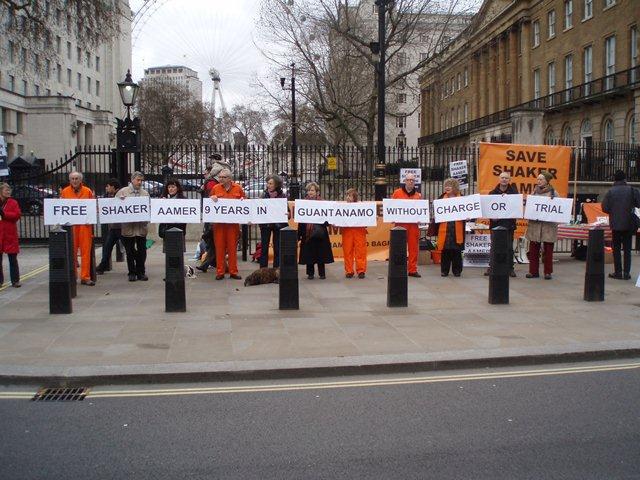 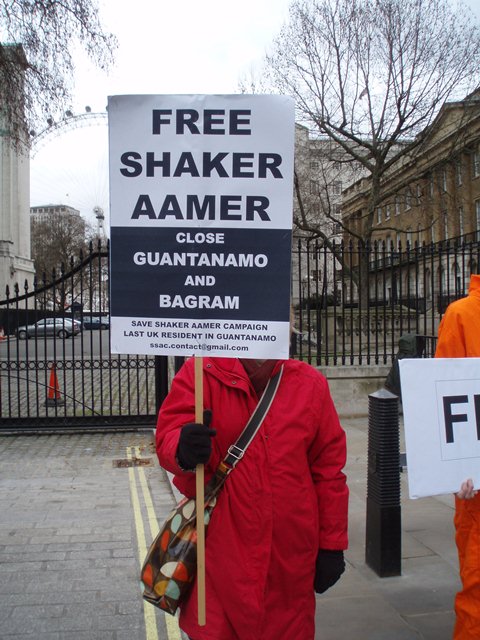 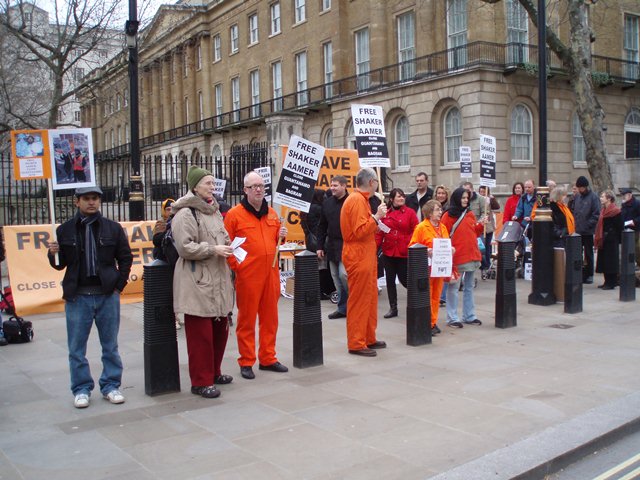 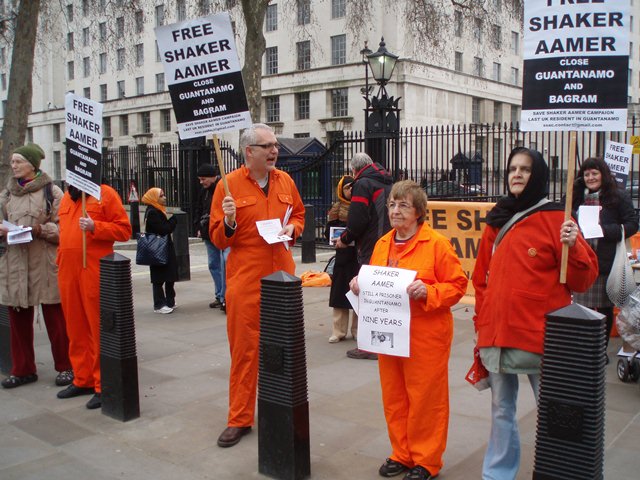 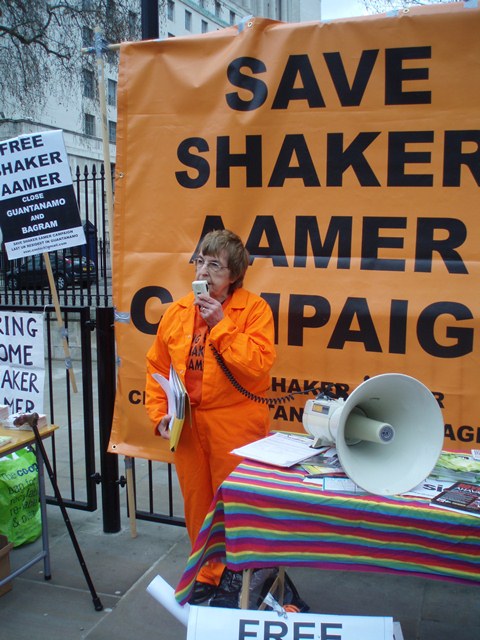 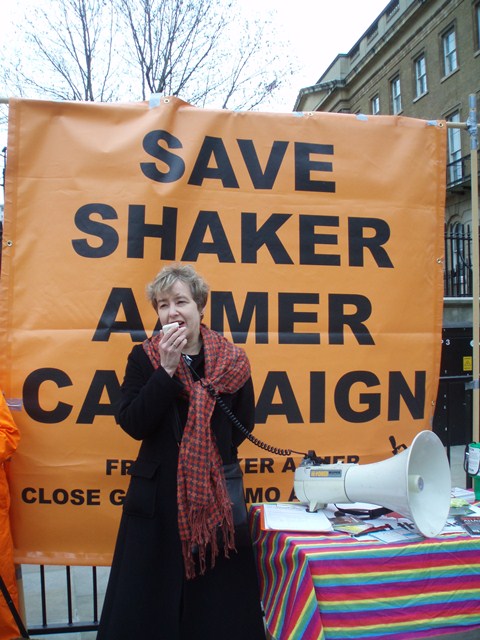 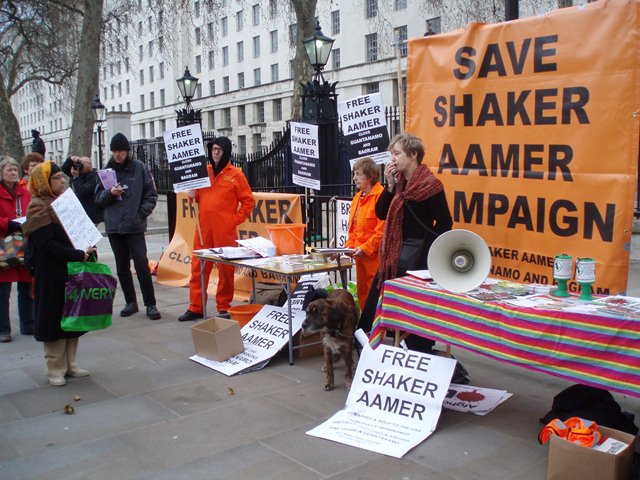 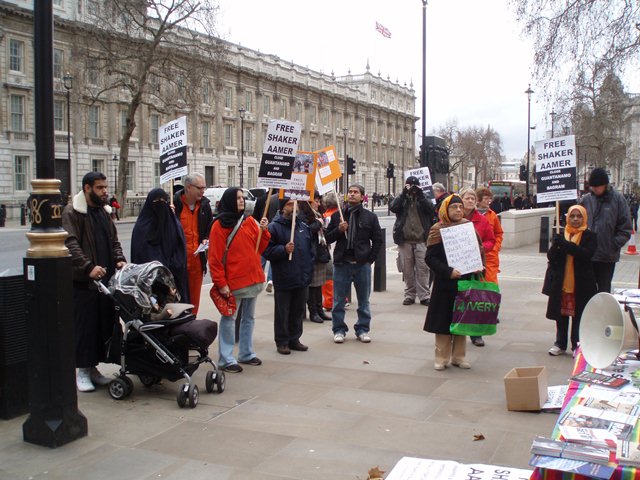 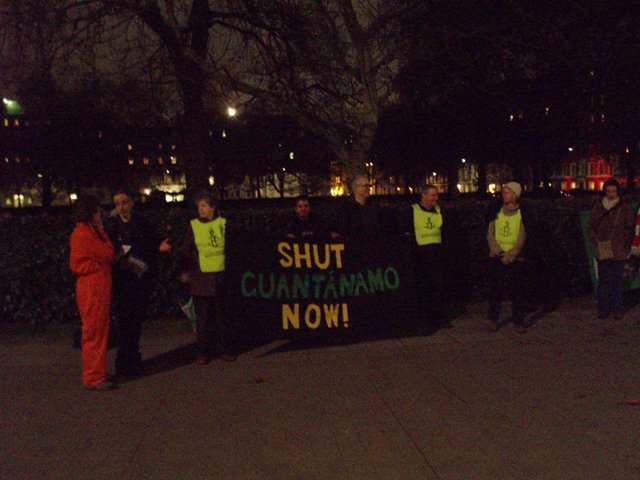 The Save Shaker Aamer Campaign (SSAC) held a vigil outside Downing Street on Saturday 5 February at midday to mark nine years of Shaker Aamer’s illegal detention without charge or trial at Guantánamo Bay. Around 40 people attended and were joined by Jean Lambert (Green MEP for London) and Kate Hudson (Campaign against Nuclear Disarmament – CND).
Shaker Aamer is the last British resident still held at Guantánamo Bay. A Saudi national, he has a British wife and children. He has never been charged or tried and the British government sought his return to the UK, along with four others who have all since long returned, in August 2007. Recently, both Foreign Minister William Hague and Deputy Prime Minister Nick Clegg have raised his case with Hillary Clinton, US Secretary of State.
In an interesting twist, a Wikileak cable published in the Daily Telegraph on 4 February from the US Embassy in London in 2009 revealed that UK officials, in a meeting with the embassy, had called again for Aamer’s release and stated that he would not be subject to prosecution in the UK.

http://www.telegraph.co.uk/news/wikileaks-files/london-wikileaks/8305176/SCT-AMBASSADOR-DAILEYS-MEETINGS-WITH-UK-OFFICIALS.html
Why the US has failed to return him is unclear. Another prisoner died at Guantánamo Bay just last week, bringing the number of prisoners to 172. Recent actions by the US administration demonstrate that there are no real plans to close Guantánamo any time soon.
Addressing the protesters, Jean Lambert questioned how two superpowers like the US and UK were incapable of working to achieve the release of just one man. Commenting on the work of other European countries, she said that while eleven prisoners had been accepted by other countries, there was still more work to be done by Europe to help close Guantánamo Bay. She stated that she was tired of officials from other countries telling her that the UK is in no position to criticise the human rights’ record of other States when its own record is poor. Ms. Lambert called for the “real” rule of law to be implemented by this country. The vigil was also addressed by Kate Hudson, Joy Hurcombe from Brighton Against Guantánamo, Ray Silk from the SSAC and David Harrold from the LGC.
The vigil also included the delivery of a letter to Downing Street calling for the return of Shaker Aamer to the UK and a minute’s silence held to remember Salim Akbar, a member of the SSAC steering committee and personal friend of Shaker Aamer, who died in December. Mr. Abkar, whose family joined the vigil, was a tireless and key campaigner on this and other human rights issues.
The evening before, the London Guantánamo Campaign held its monthly demonstration outside the US Embassy in Mayfair calling for the closure of Guantánamo Bay. Marking the fourth year of this regular demonstration (since 2007), 10 people attended.

All photos copyright of the LGC unless otherwise stated