Suleiman: The CIA's man in Cairo

Suleiman, a friend to the US and reported torturer, has long been touted as a presidential successor. On January 29, Omar Suleiman, Egypt’s top spy chief, was anointed vice president by tottering dictator, Hosni Mubarak. By appointing Suleiman, part of a shake-up of the cabinet in an attempt to appease the masses of protesters and retain his own grip on the presidency, Mubarak has once again shown his knack for devilish shrewdness. Suleiman has long been favoured by the US government for his ardent anti-Islamism, his willingness to talk and act tough on Iran - and he has long been the CIA’s main man in Cairo. 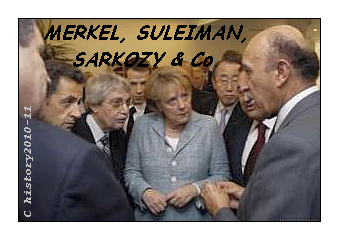 Mubarak knew that Suleiman would command an instant lobby of supporters at Langley and among 'Iran nexters' in Washington - not to mention among other authoritarian mukhabarat-dependent regimes in the region. Suleiman is a favourite of Israel too; he held the Israel dossier and directed Egypt’s efforts to crush Hamas by demolishing the tunnels that have functioned as a smuggling conduit for both weapons and foodstuffs into Gaza. .......... M O R E:

http://english.aljazeera.net/indepth/opinion/2011/02/201127114827382865.html .......... In the mid-1990s, Suleiman worked closely with the Clinton administration in devising and implementing its rendition program; back then, rendition involved kidnapping suspected terrorists and transferring them to a third country for trial. In The Dark Side, Jane Mayer describes how the rendition program began: "Each rendition was authorised at the very top levels of both governments [the US and Egypt] ... The long-serving chief of the Egyptian central intelligence agency, Omar Suleiman, negotiated directly with top [CIA] officials. [Former US Ambassador to Egypt Edward] Walker described the Egyptian counterpart, Suleiman, as 'very bright, very realistic', adding that he was cognisant that there was a downside to 'some of the negative things that the Egyptians engaged in, of torture and so on. But he was not squeamish, by the way'. (p. 113).
"Technically, US law required the CIA to seek 'assurances' from Egypt that rendered suspects wouldn't face torture. But under Suleiman's reign at the EGIS, such assurances were considered close to worthless. As Michael Scheuer, a former CIA officer [head of the al-Qaeda desk], who helped set up the practise of rendition, later testified, even if such 'assurances' were written in indelible ink, 'they weren't worth a bucket of warm spit'."
Under the Bush administration, in the context of "the global war on terror", US renditions became "extraordinary", meaning the objective of kidnapping and extra-legal transfer was no longer to bring a suspect to trial - but rather for interrogation to seek actionable intelligence. The extraordinary rendition program landed some people in CIA black sites - and others were turned over for torture-by-proxy to other regimes. Egypt figured large as a torture destination of choice, as did Suleiman as Egypt’s torturer-in-chief. At least one person extraordinarily rendered by the CIA to Egypt — Egyptian-born Australian citizen Mamdouh Habib — was reportedly tortured by Suleiman himself.

Suleiman the torturer: In October 2001, Habib was seized from a bus by Pakistani security forces. While detained in Pakistan, at the behest of American agents, he was suspended from a hook and electrocuted repeatedly. He was then turned over to the CIA, and in the process of transporting him to Egypt he endured the usual treatment: his clothes were cut off, a suppository was stuffed in his anus, he was put into a diaper - and 'wrapped up like a spring roll'.
In Egypt, as Habib recounts in his memoir, My Story: The Tale of a Terrorist Who Wasn’t, he was repeatedly subjected to electric shocks, immersed in water up to his nostrils and beaten. His fingers were broken and he was hung from metal hooks. At one point, his interrogator slapped him so hard that his blindfold was dislodged, revealing the identity of his tormentor: Suleiman.

Frustrated that Habib was not providing useful information or confessing to involvement in terrorism, Suleiman ordered a guard to murder a shackled prisoner in front of Habib, which he did with a vicious karate kick. In April 2002, after five months in Egypt, Habib was rendered to American custody at Bagram prison in Afghanistan - and then transported to Guantanamo. On January 11, 2005, the day before he was scheduled to be charged, Dana Priest of the Washington Post published an exposé about Habib’s torture. The US government immediately announced that he would not be charged and would be repatriated to Australia.

A far more infamous torture case, in which Suleiman also is directly implicated, is that of Ibn al-Sheikh al-Libi. Unlike Habib, who was innocent of any ties to terror or militancy, al-Libi was allegedly a trainer at al-Khaldan camp in Afghanistan. He was captured by the Pakistanis while fleeing across the border in November 2001. He was sent to Bagram, and questioned by the FBI. But the CIA wanted to take over, which they did, and he was transported to a black site on the USS Bataan in the Arabian Sea, then extraordinarily rendered to Egypt. Under torture there, al-Libi "confessed" knowledge about an al-Qaeda–Saddam connection, claiming that two al-Qaeda operatives had received training in Iraq for use in chemical and biological weapons. In early 2003, this was exactly the kind of information that the Bush administration was seeking to justify attacking Iraq and to persuade reluctant allies to go along. Indeed, al-Libi’s "confession" was one the central pieces of "evidence" presented at the United Nations by then-Secretary of State Colin Powell to make the case for war. .......... M O R E:

http://english.aljazeera.net/indepth/opinion/2011/02/201127114827382865.html .......... As people in Egypt and around the world speculate about the fate of the Mubarak regime, one thing should be very clear: Omar Suleiman is not the man to bring democracy to the country. His hands are too dirty, and any 'stability' he might be imagined to bring to the country and the region comes at way too high a price. Hopefully, the Egyptians who are thronging the streets and demanding a new era of freedom will make his removal from power part of their demands, too.

Lisa Hajjar teaches sociology at the Uiversity of California - Santa Barbara and is a co-editor of Jadaliyya. .....

This article first appeared on Jadaliyya .....

CAIRO - Torture ‘business as usual’ in Egypt amid revolt ....... Egypt's feared state security services are using torture as much as they ever did, rights activists say, with no sign that their horrifying tactics are about to change despite the regime's promise of reform. Rights groups say that anger against routine police abuse and torture has been a driving force behind the massive popular protests in which at least 300 people have died and an unknown number were detained. The regime has agreed to deal with complaints about the treatment of political prisoners and to lift an emergency law used to detain people without trial "depending on the security situation" in the face of the protests. ........... Mubarak addressed the nation on Tuesday, saying: "My first responsibility is now to bring security and stability to the nation to ensure a peaceful transition of power." Since the speech, Seif Al Dawla said: "We have at least 30 documented cases of killings." "Mubarak must go," she told AFP. "Nothing will change until he is gone: he is the commander in chief of torture and of the police." .........

Interesting article but why is it in the Cambridge section?