Solidarity with the Reykjavik 9 from the university of utrecht

From the temporary autonomous zone of the occupied university of Utrecht in the Netherlands we bring a greeting of solidarity to our comrades of the Reykjavik 9 and everyone who continuous to struggle on their sides. 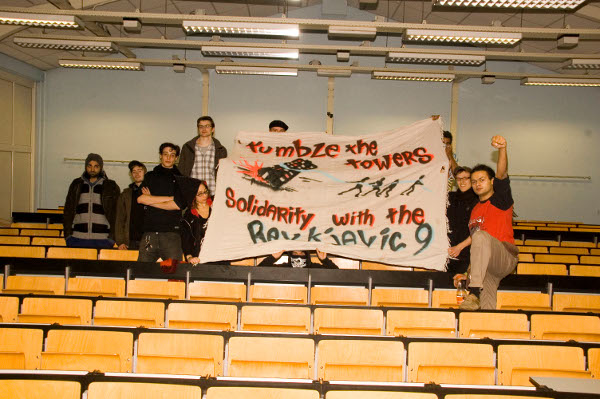 Our struggle knows no borders; from the Arab world and throughout the European societies people are fighting with an undying passion for social change. They are tired of being ruled by an elite class of bankers, politicians and managers who make decisions for them and hand them out to the crisis based neo-liberal system. The clowns change their costumes, paint their faces in different colours, but the circus stays the same.

The rhetoric of the clowns that “austerity cuts are necessary because we are all responsible ” is a complete and absolute lie. Just another justification to steal the money and rights of the people and fortify the reproductive cycle of the status quo. The reality shows that the money is not taken back from the bankers and the wealthy that for so many years flourished in the creation of unstable economic and political systems. They are not hold responsible for the risks they took, but instead rewarded by massive bailouts. Through media spectacles a select few are chosen to be let to the guillotine of public prosecution for the masses to manifest their anger. While behind the curtains, once again the marginalised of society, the workers, students and migrants are robbed of their social security and dignity. We realise that our struggle does not stand alone, but is connected, because their system is also connected. We call out for international solidarity and uncompromising and absolute NO to their system.

From one barricade to another, Tumble the towers!


more info on the occupation


Background information on the case of the Reykjavik 9