Reporter: Egypt police kill 10 in Sinai jailbreak ........ EL-ARISH, Egypt - Clashes late Friday in the Egyptian Sinai left 10 people dead and injured 50 others, a Ma'an reporter said. The clashes broke out after Egyptian civilians descended on a police station in the town of El-Arish to free prisoners held by the regime. Twelve police officers surrendered to the crowd, which was able to secure the release of their friends and relatives. 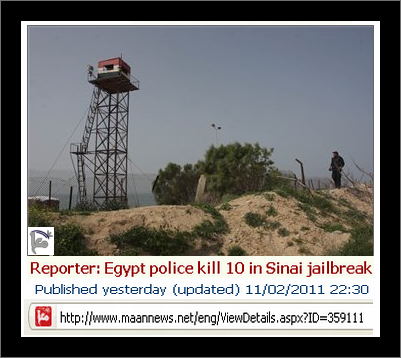 Other members of the police escaped the chaos amid large celebrations in the northern Sinai hours after president Hosni Mubarak stepped down and handed power to the army. ........... MO R E:

The armed men were protesting Mubarak's initial refusal to quit despite weeks of protests.

Medics said Ahmad Jamil, 30, was shot in the hand during the clashes.