Shell action in Solidarity with Rossport

Services were distrupted at the Shell garage on Alexandra Parade in Glasgow in solidarity with the approval of Shell's gas pipeline in Rossport, Ireland and to raise awareness about the crimes against humanity committed by Shell around the world. 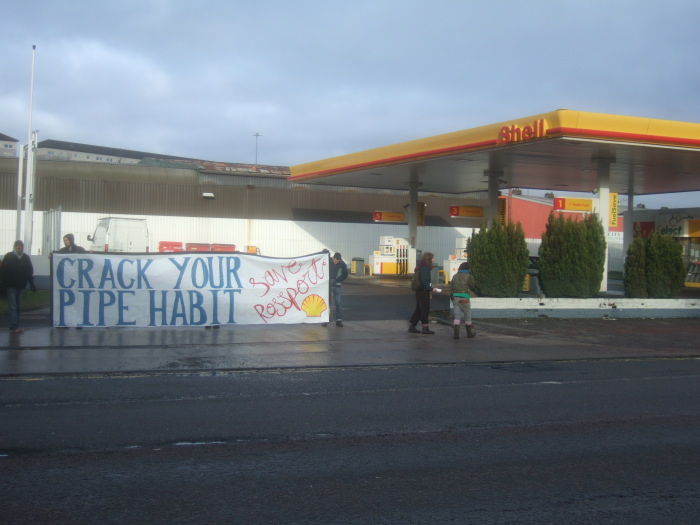 The Shell garage on Alexandra Parade saw a group of activists with banners reading "Crack your pipe habit," "free Rossport," and "Shell to Hell" disrupting services for the afternoon with many drivers being turned away from the petrol station or choosing to go elsewhere themselves. The group gave leaflets to drivers entering the garage and passers by which highlighted Shell's plans to bring at least 1 trillion cubic feet of high-pressure gas from west coast County Mayo and pump it 9km inland through an inhabited area, risking people's lives.

The action was carried out in solidarity with the people of Rossport, whose lives are threatened by the high pressure pipeline which would go through their community to bring money to one of the most damaging companies in the world. Whilst the people of Ireland are being crippled by the cuts in public services, the corrupt government is giving away the country's natural resources to a company well known for environmental damage, disastrous accidents and human rights abuses. The action was also done to highlight other atrocities committed against people and the environment by Shell, such as the Niger Delta and the tar sands in Canada.

People around the world are resisting by defending their communities and environment against Shell.