With protests spreading to Bahrain, Algeria, Iraq and elsewhere in the Middle East, Libya joined the fray this week with a planned "day of rage" on 17 February. A solidarity demonstration was held in London outside the Libyan Embassy as well as a pro-regime demonstration at the same time. 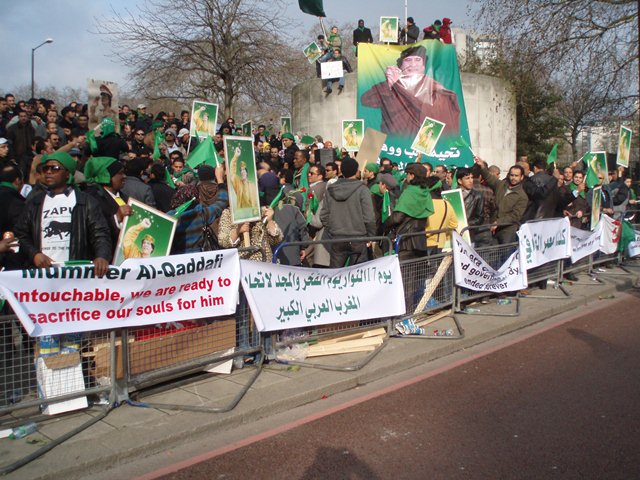 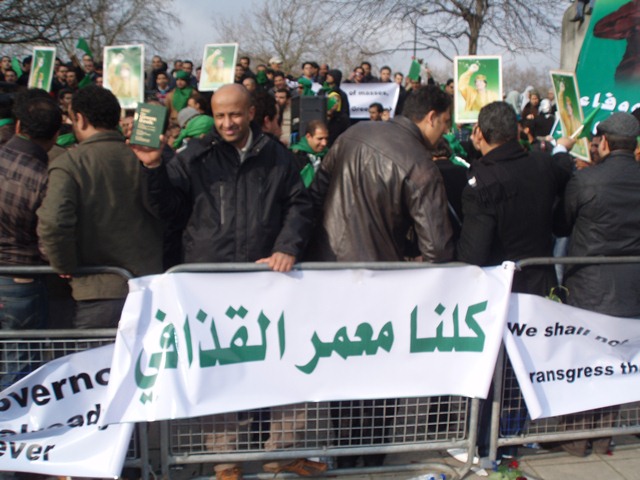 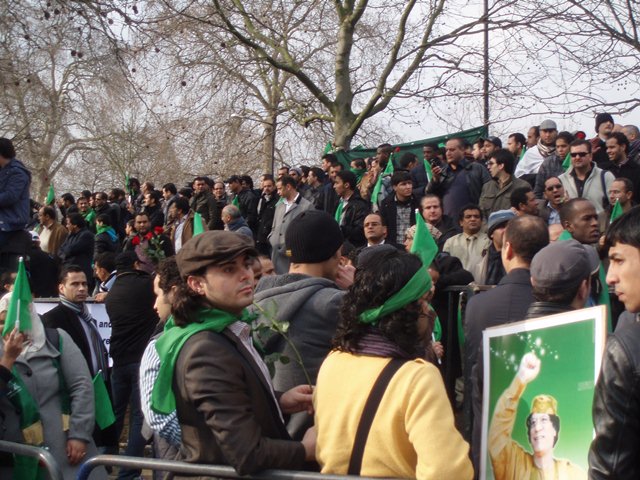 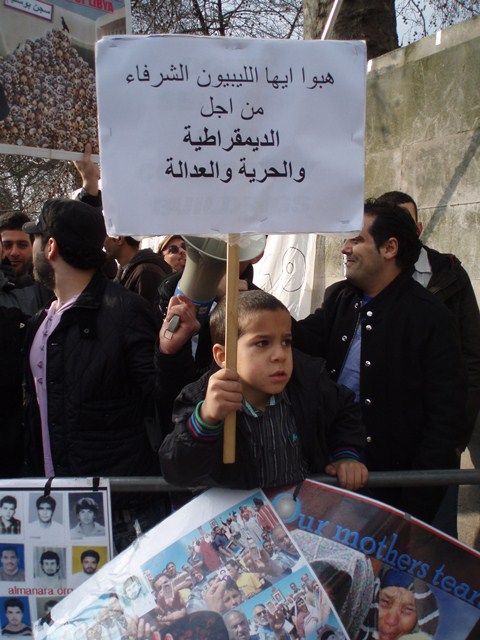 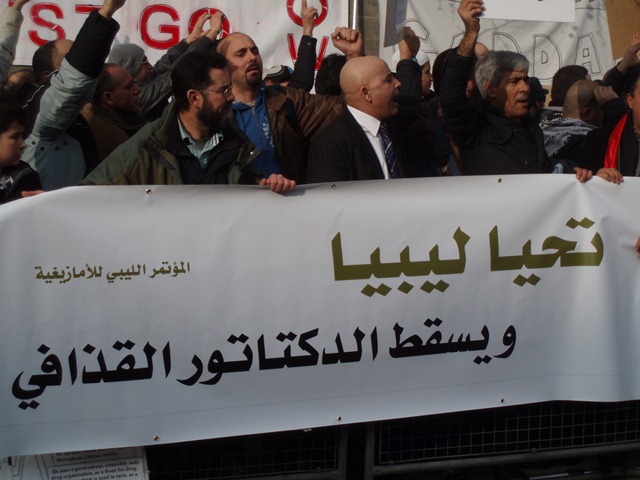 "Long Live Libya and down with the Gaddafi dictatorship" 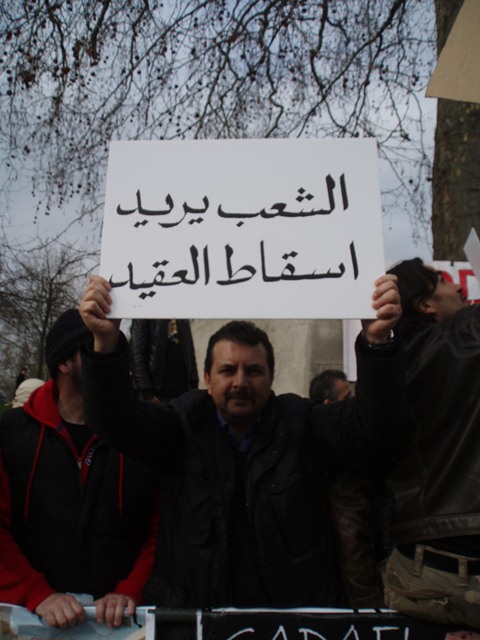 "The people want the colonel to go" 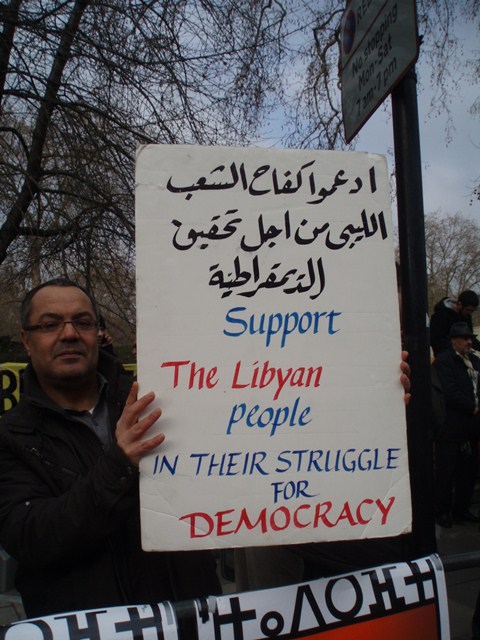 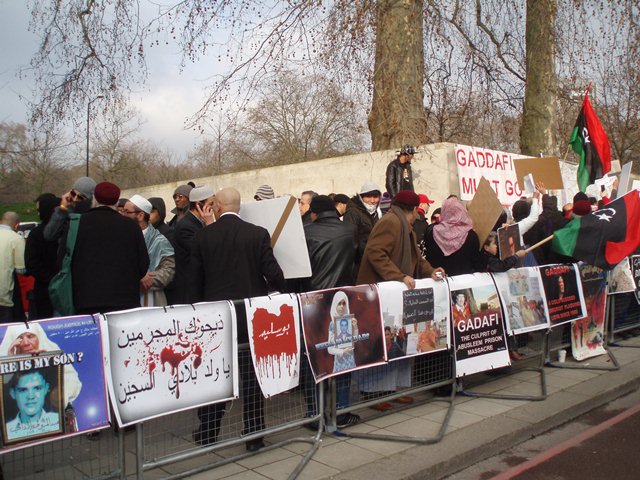 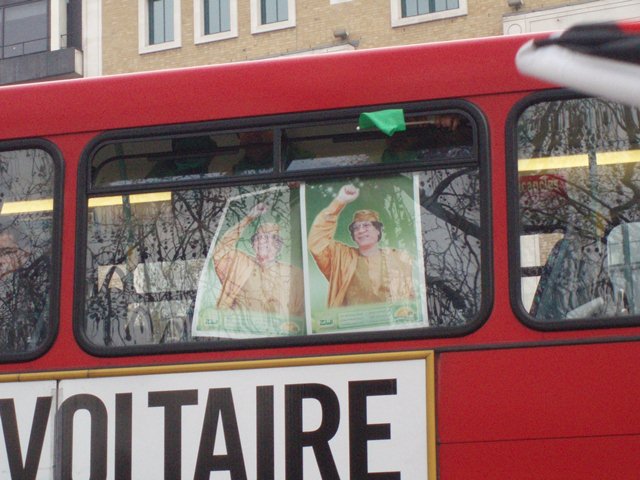 By any means? Gaddafi fans take a ride to provoke protesters 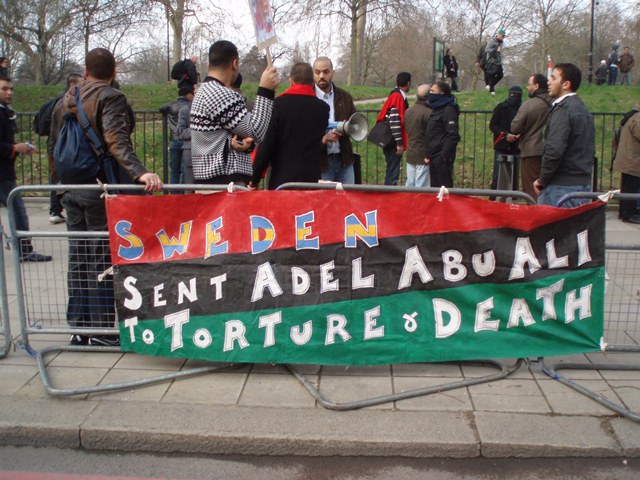 no deportations to regimes that torture 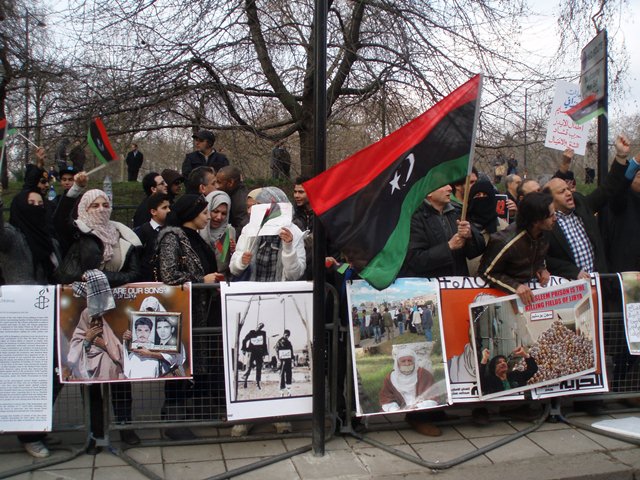 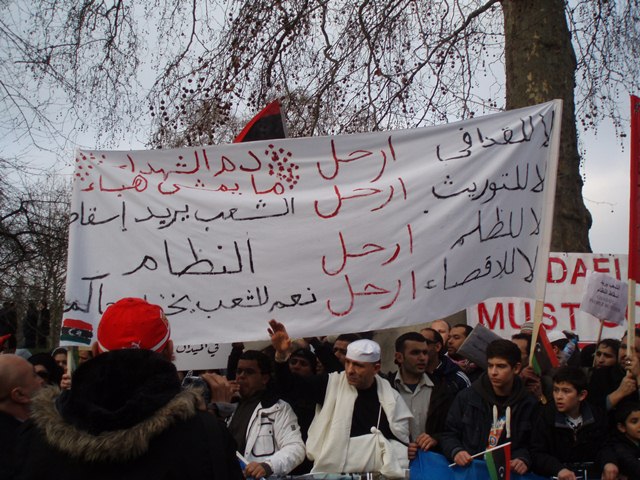 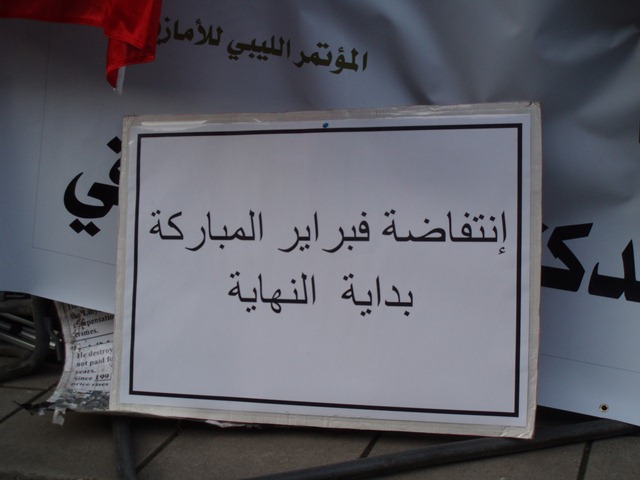 "The February uprising: the beginning of the end" 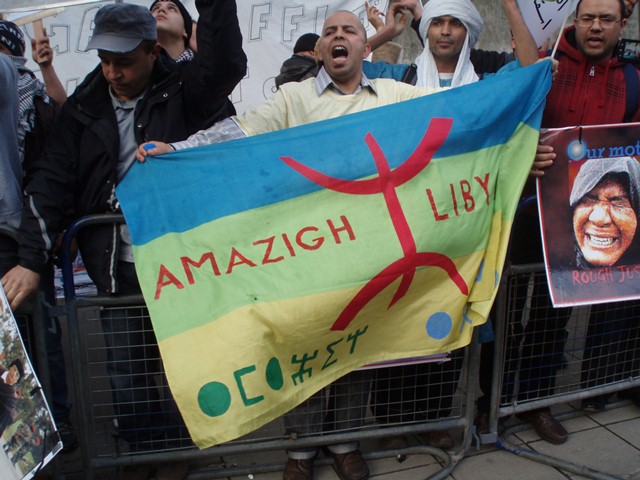 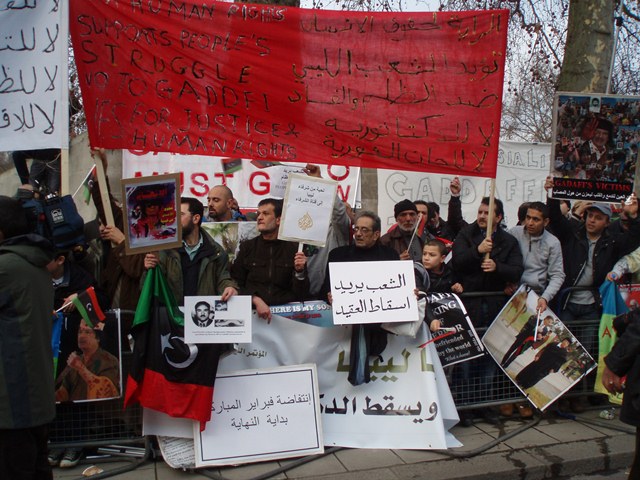 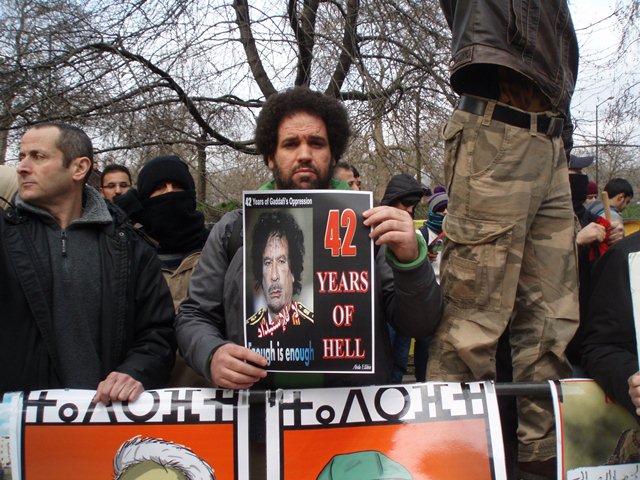 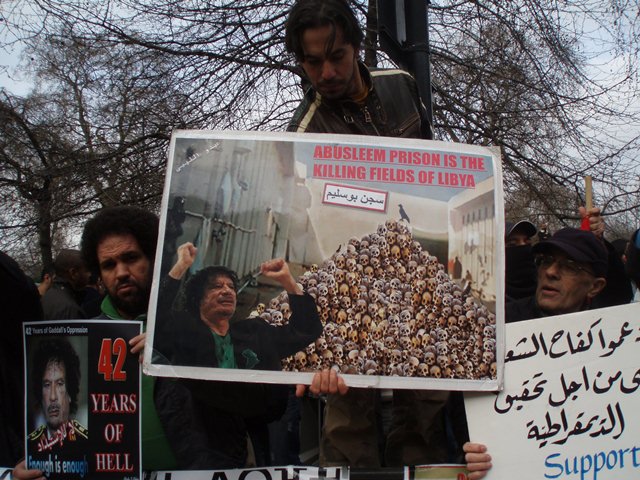 A “day of rage” was called across Libya on 17 February 2011, inspired by the protests in Tunisia and Egypt, calling on the people to rise up against their leader of 42 years, Colonel Gaddafi. In a pre-emptive strike, the protests started early as the Libyan government arrested a prominent lawyer in Benghazi. By today, more than 20 people have already been reported to have been killed. 17 February also marks the anniversary of the death of protesters in an anti-government uprising in the Mediterranean city of Benghazi in 2006. Massacres and the murder of opponents of the regime are not uncommon in Libya and protests also remembered those murdered in the Abu Salim prison massacre in 1996, when over 1200 prisoners were killed (

A solidarity protest was held outside the Libyan Embassy in Knightsbridge, London, this afternoon at 1-4pm. As with the protests in Libya itself, there were both pro- and anti-regime demonstrations held at the same time.

Around 300 pro-Gaddafi protesters, holding up pictures of Africa’s longest-standing leader, and many draped in green Libyan flags, congregated on one side and at times outnumbered the anti-Libyan regime protesters. Their ranks included many nationals of other African countries, some claiming they were returning the favour since Gaddafi supports their regimes, and Libyan students on scholarships paid for by the regime. One tearful lady told me that the anti-regime protesters were trying to “destroy our nation”. They handed out copies of the “Green Book” (outlining Gaddafi’s political vision) and provoked the anti-regime camp by coming over to their side with banners and shouting slogans. The police then banned public access via the front of the demonstration to keep the two camps apart.

Many on the anti-Gaddafi demonstration were of the opinion that those taking part in the pro-Gaddafi love-in had been paid to do so. More and more people joined their camp as the day wore on and there were than 400 people taking part in this (pro-freedom/democracy/justice) protest. One of the protesters told me that while the other demonstration was clearly a “pro-Gaddafi” demonstration, this demonstration was in support of the Libyan people. Their calls were for freedom for the Libyan people after 42 years of life under Colonel Gaddafi – for “democracy, freedom of thought and a life not under a totalitarian dictatorship”. The protest, organised by a group of Libyan organisations, made it very clear that it was time for Gaddafi to go.

With the largest oil reserves in Africa and immense wealth and the regime’s tight grip on the country, human rights abuses in Libya are often ignored. Torture in prisons, arbitrary detention of political prisoners and unfair trials are common in Libya. The official human rights organisation is run by Gaddafi’s son and freedom of the press, speech, assembly and religion are all severely restricted. Ethnic minorities are discriminated against and Libyan jails are full of illegally-held immigrants from other African countries trying to reach Europe. Many are held in dire conditions.

Of course, none of this prevents the UK from having good trade relations with Libya. The demands of one of the protest organisers, the British Libyan Solidarity Campaign, to the British government include that they “want the MOU [memorandum of understanding] between UK and Libya dissolved and we want to see the end of Trade and co-operation until Human Rights are restored.”

This MOU allegedly provides assurances that individuals deported to Libya, usually because they pose a threat to the national security of the UK (which cannot be specified as it’s national security, stupid), will not be tortured when returned there. The simple fact that a country like Libya, a signatory of the UN Convention Against Torture, needs to provide such an assurance proves that it cannot be relied on. In an appeal brought by two Libyan “terror suspects” (who still don’t know what they’re suspected of, even though they won their case), the High Court, following a decision by the European Court of Human Rights concerning Italy, held that this could not be a basis for deportation to Libya, given the fear of torture once returned there. Nonetheless, in its recent counter-terrorism review (published by the Home Office on 26 January 2011), the government is looking to roll out this programme and make similar diplomatic agreements on deportations to other countries. As clearly demonstrated by the recent Wikileak concerning the return to Libya of former prisoner Abdel Basset Megrahi (

http://www.telegraph.co.uk/news/wikileaks-files/libya-wikileaks/8294871/PAN-AM-103-BOMBER-HAS-INCURABLE-CANCER-LIBYANS-SEEK-HIS-RELEASE.html), trading relations trump all other concerns, particularly the human rights of the Libyan and British publics.

Former Guantánamo Bay prisoner, Omar Deghayes, whose family fled the Gaddafi regime in the 1980s and came to the UK, supported the action. He said, “Gaddafi, the dictator must go now. People have risen up across the whole of Libya because this man is a cold-blooded murderer who killed 1600 people in one night and today is 17 February. On this same day in 2006, he killed about 600 others in the city of Benghazi. It is very good that people in all Libya have risen up against this killer and he will soon be ousted from power”.

With solar flares and the hot winds of changes blowing across the Sahara, Gaddafi may follow hot on the heels of Ben Ali and Mubarak. Nonetheless, Britain must change its foreign policy and broad support for regimes that torture in all regions.