Egyptian Revolution at a Turning Point 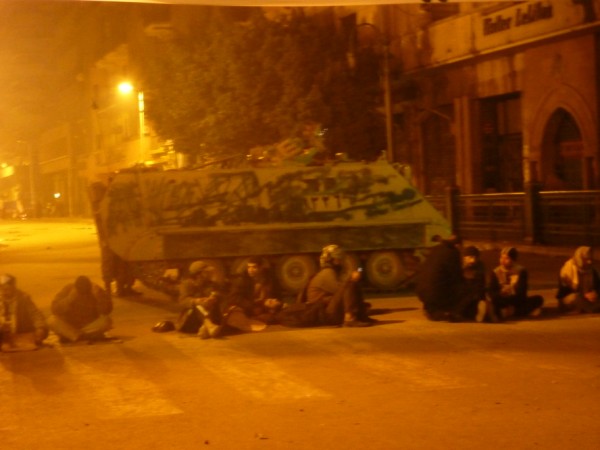 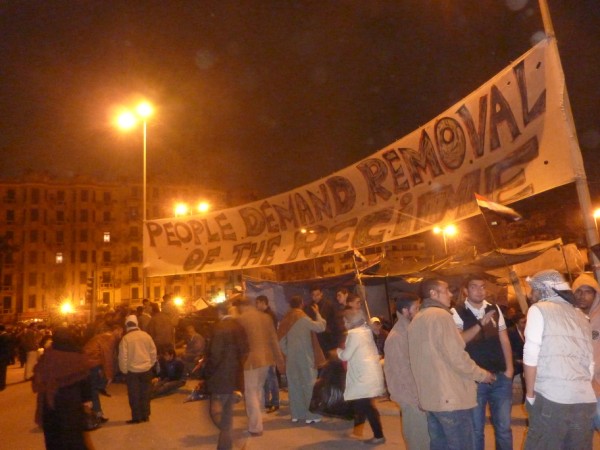 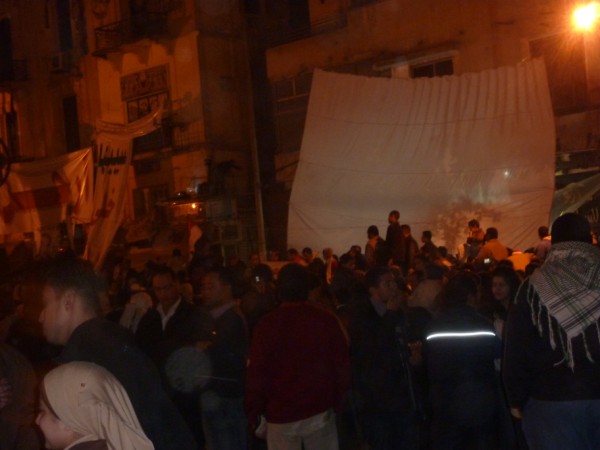 crowd around TV screens to watch news of the revolution 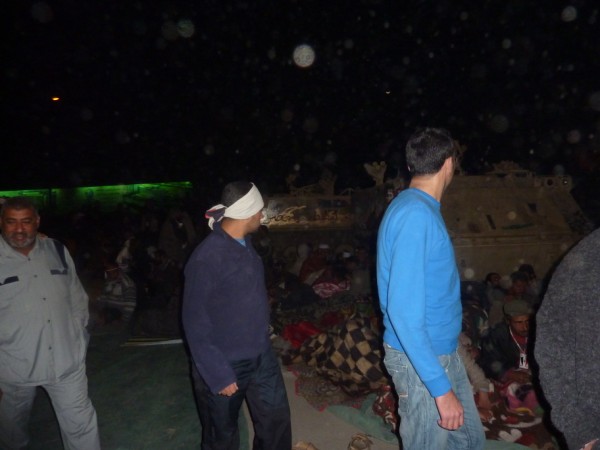 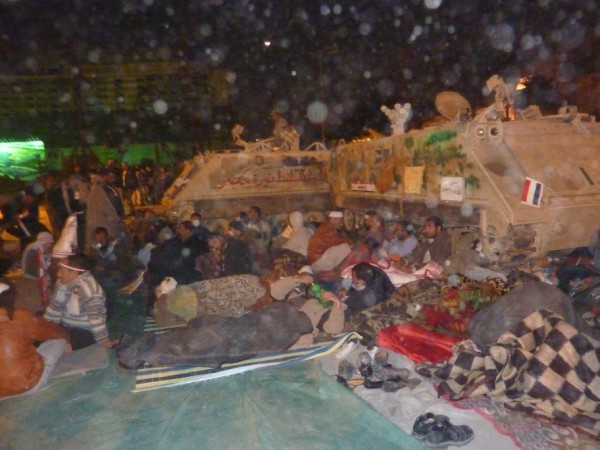 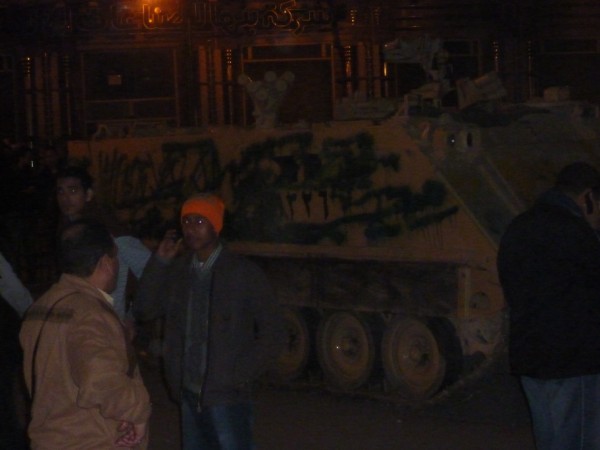 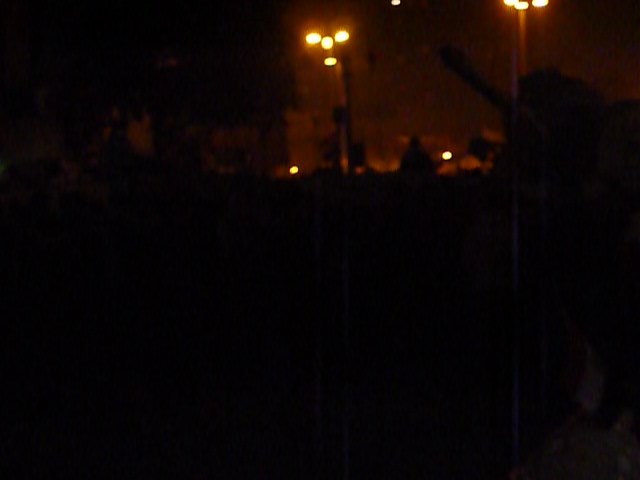 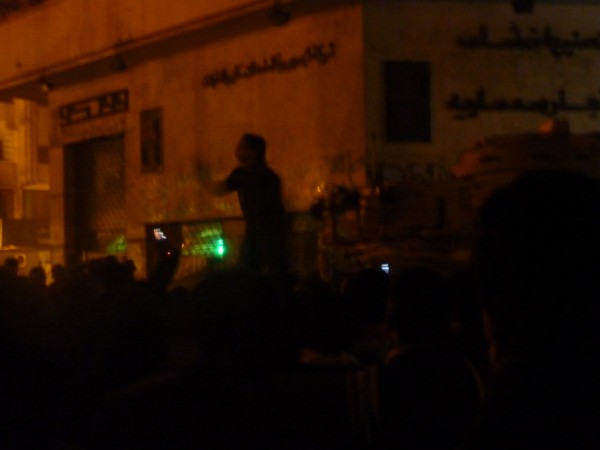 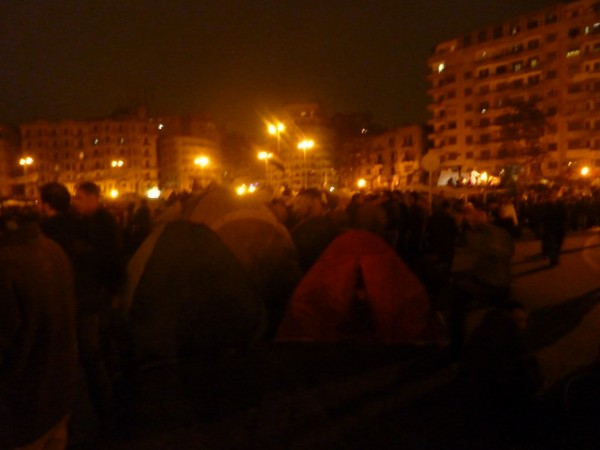 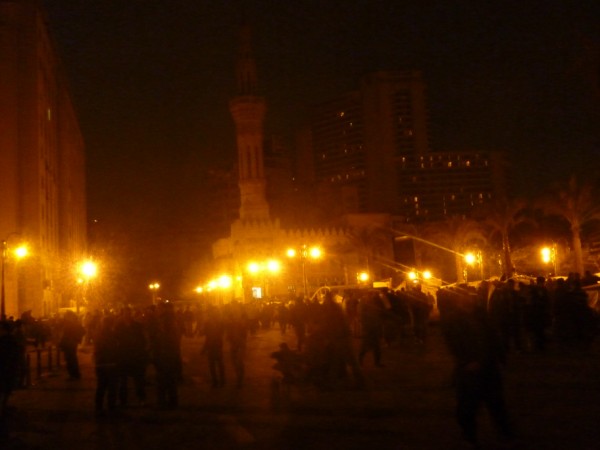 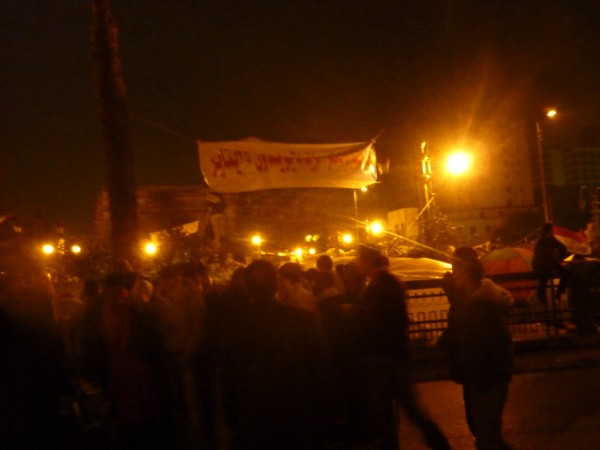 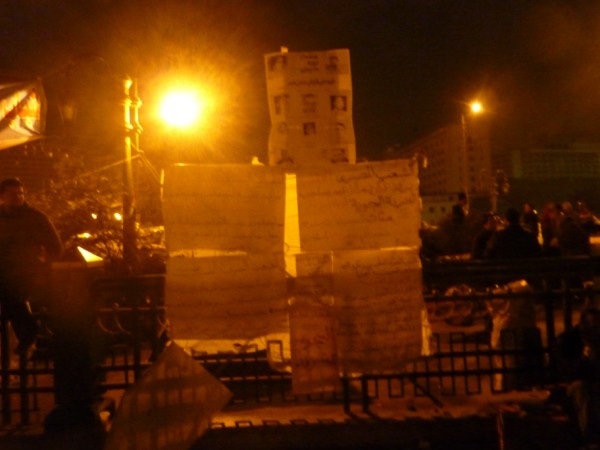 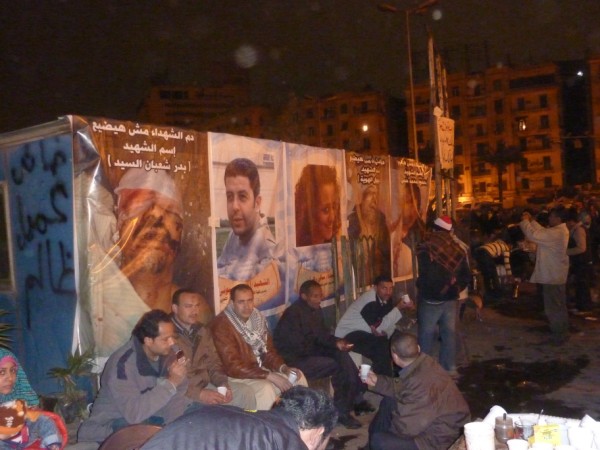 Occupiers bedding down next to pictures of the martyrs 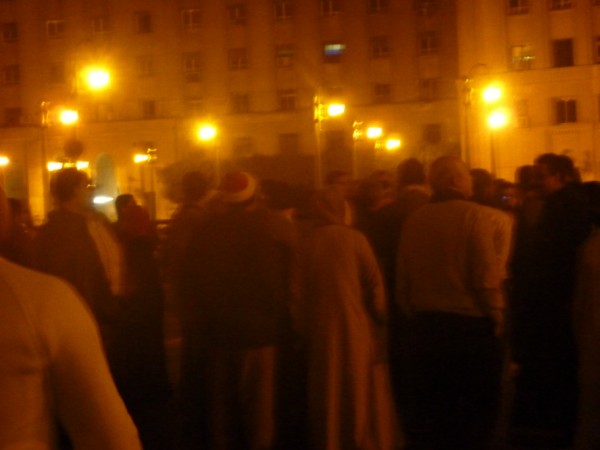 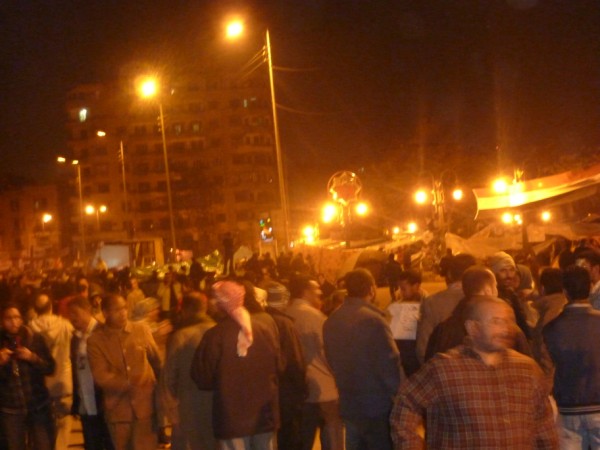 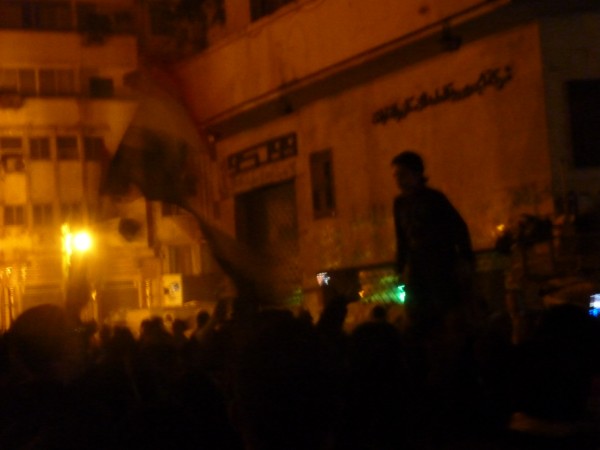 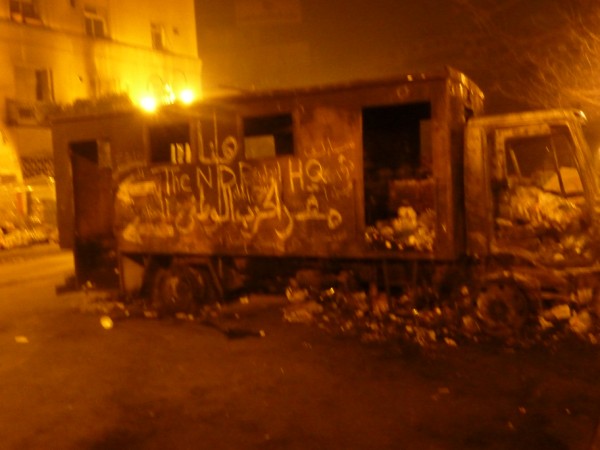 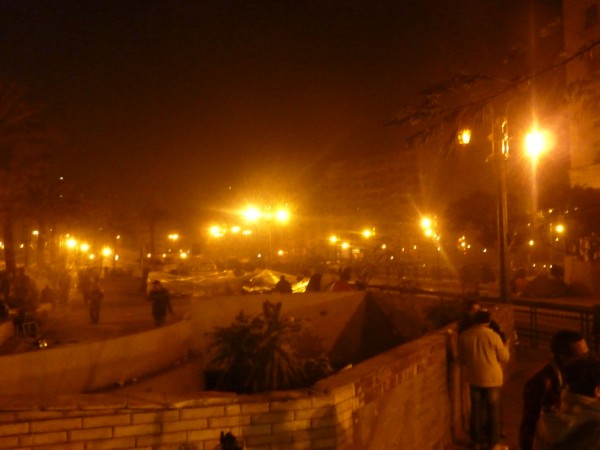 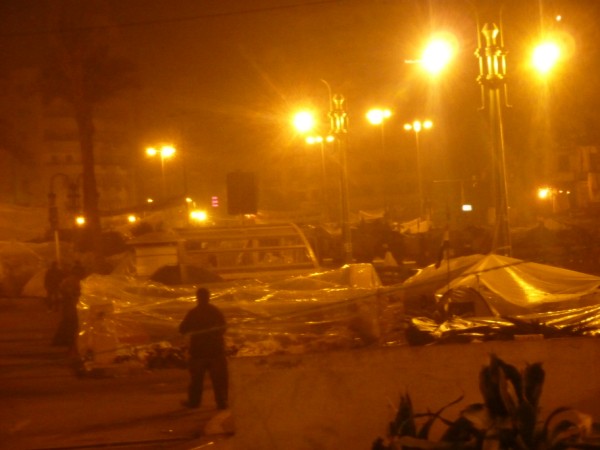 The revolution in Egypt is at a turning point: with Mubarak gone and the final protesters forcefully removed from Tahrir Square by the army, the struggle now appears to be spreading more widely through the country in the form of strikes and a general refusal to let things just get ‘back to normal’. Although the first out of the seven demands of the people, the removal of Mubarak, might have been achieved, the, now ruling, army’s statement on state TV yesterday, urging an end to all political protests, made it clear that the struggle of the Egyptian people is far from over. Without underestimating the protests that happened around the country during the three week uprising, the very nature of the Tahrir occupation seem to have facilitated a fundamental and irreversible sense of empowerment in the people which will not be easy for any government to crush. What follows is a report from a night that we spent in Tahrir on the 8th of February, a quiet night which still gave plenty of examples of impressive grassroots resistance in action.

Entering the square at around 7 pm it was immediately obvious that the people willing to break the, less and less strictly enforced, curfew were in their tens of thousand, with men, women and children bedding down for the night in personal or communal tents put up throughout the square. Many longterm protesters preferred not to sleep during the night but were mingling, chatting and gathering around the makeshift TV screens, watching the media coverage of the revolution.

Ever since the earliest days of the revolution, when paid thugs gained access to the square, protecting Tahrir as an autonomous space has been a priority. From what people told us most nights followed a pattern where sometime during the evening or the early hours the army tanks would try to move, either into the square or in an attempt to consolidate their positions. Protesters alerted the other Tahrir occupiers about this by banging of the fences of the square or whistling for support -a call to action for everyone to rush towards the danger point and prevent the soldiers from moving. As the day’s curfew came into force, hundreds laid down, sat or stood in front of the tanks which controlled five of the entrances. At around midnight on Monday, people suddenly burst into action: this time the army was not trying to enter the square, but were starting to move back along a road leading to it. However, quickly realising that even a backwards move by the army would make the entrance less secure, the heavily armed tanks were quickly surrounded by the crowd from all sides and prevented from moving. Once the soldiers were reduced to frantically talking on their radios and mobiles and smoking cigarettes, several people – including a small child – scaled the tanks and started chanting loudly.

Sleeping spaces, housing thousands of people, were set up in makeshift tents and shacks around the square. Thousands of men slept cheek to toe in a mosque on the edge of the square while hundreds queued for washing and toilet facilities. All night teams of people collected rubbish from the square and handed out bread and cheese to anyone who was hungry. A cafe was operating within the barricades and hundreds of occupiers sat up all night drinking tea and smoking nargile.

The revolution in Egypt has so far been an impressive display of people power rarely witnessed on such a large-scale. What makes it even more encouraging is that it is being carried out by people who have lived most, if not all, of their lives under a rigid military dictatorship and therefore have to work even harder to break free. But the question is what will happen now? So far only two of the protester’s seven demands, the removal of Mubarak and the dissolution of parliament, have been fulfilled and the country is still under military rule. Whilst some people continue to maintain that the army are on their side, we met many Egyptians who doubted this from the outset. Recent developments, such as the removal by the army of the protesters who would not leave Tahrir square until power was handed over to a civil administration, suggests that they can not be trusted to aid any real liberation of the Egyptian people. The fact that the army prevented cameras and reporters from recording the eviction, thus continuing the media blackout and repression of free speech of the Mubarak regime should act as a warning to the people.

The revolution needs to be ongoing, and there are encouraging signs suggesting that it is. After the initial and well deserved celebration after Mubarak’s resignation last Friday, the workers of Egypt wasted no time before escalating some long talked about strike actions. As we write nurses, airport staff, tour guides and oil, gas and textile workers are all on strike across the whole country, showing that the revolution is not a metropolitan phenomenon only. It is clear from the different workforces’ demands, which include better wages, health coverage, investigations into corruption and environmentally destructive practices at work places, that settling for less than a total rebuilding of the system would be a mistake. Continued, even temporary, rule by a military who have spent decades serving the government which has now been overthrown could never result in the kind of freedom which over 350 revolutionary Egyptians died to see.