Reports say thousands of pro-democracy protesters, chanting “victory, victory,” have forced out police and snipers from a central square in The Bahraini capital, Manama. 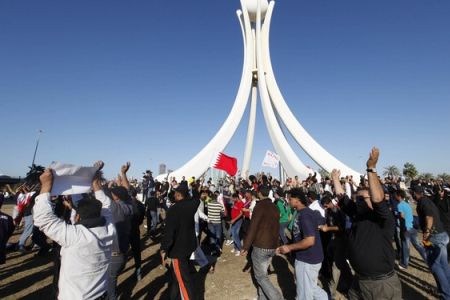 Reports say thousands of pro-democracy protesters, chanting “victory, victory,” have forced out police and snipers from a central square in The Bahraini capital, Manama.

Thousands have start marching towards Pearl Square, which has become the symbol of the ongoing revolutionary movement.

Khawaja said protesters were in high spirits and chanting slogans such as 'victory, victory.'

Protesters have vowed to stand firm despite the deadly crackdown that left several people dead and hundreds others wounded in Manama over the past days.

"We don't fear death any more, let the army come and kill us to show the world what kind of savages they are," Reuters quoted one woman, teacher Umm Mohammed, quoted as saying.

Earlier in the day, Crown Prince Sheikh Salman bin Hamad al-Khalifa ordered military vehicles to withdraw from the streets and deployed police in its place.

Meanwhile, the Bahraini King called for national dialogue, but the offer was rejected by the main opposition bloc, Al-Wefaq, which says the government must resign and troops must withdraw from the streets first.

On Friday, Bahrain witnessed its biggest-ever protest in recent history. Bahraini troops opened fire on protesters in what was described as a “massacre” by medics and lawmakers.

The Bahraini government has violently suppressed the demonstrators demanding an end to monarchy.