Violence has again rocked the streets of the Iraqi city of Sulaymaniyah as Kurdish demonstrators continue to demand the ouster of the Kurdistan Regional Government. 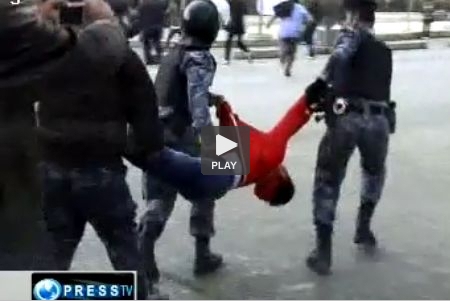 
Violence has again rocked the streets of the Iraqi city of Sulaymaniyah as Kurdish demonstrators continue to demand the ouster of the Kurdistan Regional Government.

They said the move was in retaliation for those killed and injured during Thursday's protest.

Based on unofficial reports and eyewitnesses, demonstrations that began Thursday have so far left four dead and around 70 injured.

The report adds that some 5,000 KDP military forces were deployed on the streets of Sulaymaniyah over the past two days.

Following popular demonstrations in Iraqi Kurdistan over poverty and unemployment as well as financial and administrative corruption, Sulaymaniyah University students also joined the protests on Saturday.

As shots rang out on streets in the background during a brief talk with the Press TV reporter, Sulaymaniyah Police Chief Amed Salar claimed he had no idea who was shooting and why.

“I have no information, I don't know what is going on, I don't have any idea,” Salar told our correspondent.

Riot police were called in to stop the unrest. In ensuing clashes, 10 were arrested and 15 injured, including one journalist that was shot in the foot and at least two more that were beaten by police.

“I was covering the protests when security forces attacked me, they beat me with baton and never asked who I was. I have an ID card and I said I am working for Payam TV channel,” journalist Wrya Hussein told Press TV.

Ruling parties have pointed the finger at the leading opposition party Goran for inciting unrest after they released a statement last month calling for the dissolution of the Kurdistan Regional Government.

But the Goran Party says their members have had no role in recent demonstrations. Although the party supports the right of people to protest, it says that it does not, in any way, condone violence used by protesters over the past three days.

Students at the University of Sulaymaniyah say they will continue demonstrations until the KDP forces leave the city and they receive answers from the government about Thursday's shootings.

Security forces have opened fire on students in the Iraqi University of Sulaymanieh after they joined popular protests in the Iraqi Kurdistan region.

A peaceful protest in northern Iraq against the local government of Iraqi Kurdistan President Masud Barzani has ended in violence with 4 dead and over 50 injured.