Activists held a solidarity action outside the Steenockerzeel 123bis detention centre in Brussels this afternoon. Inside, prisoners took matters into their own hands and started a revolt which led to one escape and a wing destroyed by fire. Currently the area is shut down by police. 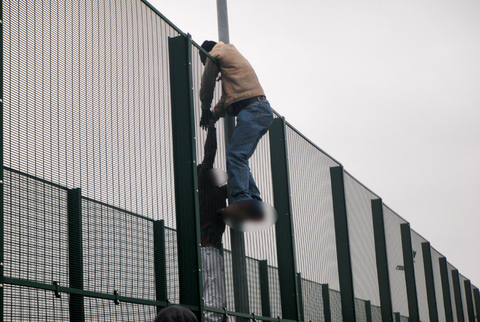 The group "Voices Without Borders" organised a solidarity action this afternoon at the 127 bis detention centre in Steenockerzeel, Brussels this afternoon starting at 16.30. The action was a show of solidarity with prisoners in the immigration prison who have been on hunger strike for more than ten days after an 18 year old Egyption migrant was tied up and beaten by guards.

The demonstrators arrived at the centre with music, shouts and banners, including one showing a telephone number which prisoners could call to relay testimonies and messages. The lively demo was met with lots of interaction from the people inside shouting and banging on windows, clearly in a resistant mood. People inside and out shouted messages of solidarity and defiance to each other whilst a line of riot cops looked on. Whilst demonstrators banged on the outer line of five meter steel fences prisoners inside began to throw objects out of the windows.

After some time a fire broke out in one cell and people were led out of the wing into the courtyard near the fences close to the demonstration while the fire began to rage. Guards began pushing prisoners on the fire escape.

One prisoner managed to climb the fences out of the centre to freedom, where he then disappeared into mid air. Others occupied the rooftop.

As more police arrived to "pacify" the revolt, activists showed solidarity, staying close to the centre in support.

The roads were blocked with police surrounding the centre and cordoning off traffic in the nearby village of Steenockerzeel. The train station has also been closed down. As of late evening, TV crews from the Belgian networks were still in the area. Recent reports say that one wing has been destroyed, with prisoners moved to other dention centres.

Solidarité avec les revoltés. In solidarity with the fighting spirit of the immigration prisoners of Steenockerzeel, locked up for no crime in the "Capital of Europe". No borders, No nations.

NOTE -- images from capitalist media, too late to blur faces.

You can watch the (blurred) videoclip now at

http://www.youtube.com/watch?v=p5MazqOSDXQ
(the videoclip is not much more then a capture of a mainstream video-report, translated and added with some pictures, but it's better then nothing)

Some more pictures can be found on:

The escapee is still free. Two wings were made uninhabitable by prisoners. At least 25 people have been moved from the destroyed wings to other detention centres in Belgium; but as there are not enough places empty in other centres for everyone, this means the Belgian state may have to release many people. It is not possible at this time to say what happened to all those involved in the revolt, but there has not been news yet of punitive measures. In Brussels, a wave of graffiti celebrating the revolt of 127bis has been appearing all over the city. "Tunisia ... Egypt ... Libya ... 127bis ... the fire is spreading."