Thousands joined the protest outside the Libyan Embassy this evening, before marching on Downing Street.. The Socialist Worker reports that 10 coaches travelled from Manchester alone, and that some protestors have declared that they will spend the night outside the Embassy. More joined protests outside Downing Street. 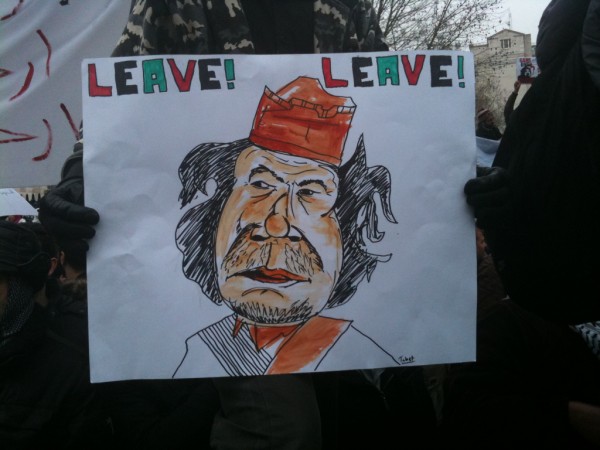 Protests have been held on a daily basis since Sunday, and plans are afoot for the largest yet on Sunday 27th Feb, if Gadaffi manages to hold onto power for that long. This afternoon Qadaffi made another appearance on Libyan State TV. In a rambling speech he called on his supporters to attack the pro-democracy protestors and vowed to die a martyr. Declaring that "Libya wants glory, Libya wants to be at the pinnacle, at the pinnacle of the world", he again accused the west of providing mind-altering drugs to the protestors.

Later students at London School of Economics occupied the Senior Common Room in protest at the links between the university and the Gaddafi regime. Although LSE suspended its Libya funded programmes yesterday, the students are demanding that the funding that LSE received should be returned "to the people of Libya".

Yesterdays protest outside the Embassy saw the Libyan flag removed and replaced with the Libyan Independence Flag.

Hizb ut-Tahrir turned up at Sunday's protest, and such was the displeasure of the protesters, that police cordoned off a seperate area for them.