At 7PM on February 22nd, Students at the LSE began an occupation of the Senior Common Room in the Old Building (Houghton St.) against the LSE’s regarding their association with the Libyan regime. In light of recent events the LSE administration announced that they would no longer be accepting the money from the Gaddafi family. They have already accepted £300,000 and were scheduled to receive and additional £1.2.

UPDATE: This morning LSE students occupied the office of director Howard Davies in protest at the university's links to the Libyan regime. 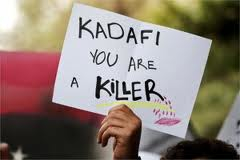 b) A formal commitment by the LSE refraining from cooperating with the Libyan regime and any other dictatorial regimes that are known to be implicated in gross violations of human rights.

c) Rejecting the rest of the yearly installments that are being received from the £1.5 Million donation of the Gaddafi International Charity and Development Foundation (GICDF) and work towards creating a scholarship fund for underprivileged Libyan students using the £300k that LSE has already accepted and not spent yet.

d) Revoking Saif Gaddafi's LSE alumni status, as his public statement on Sunday 20th of February and the various reports issued by International Human Rights Organisations clearly demonstrate that he is implicated in the killing of innocent civilians as well as other human rights violations. His association with the LSE community and particularly its student body is a disgrace that is not tolerated by the LSE staff, students and alumni.
e) Publicly committing that no grants from officials of such oppressive regimes will be accepted in the future by establishing a set of standards and a process of democratic decision-making with student representation that determines whether or not the School should accept money coming from controversial donors.
Failing to do these would not only betray the LSE's ethical values, it would also tarnish the School's reputation in a region whose people are currently fighting to reclaim their freedom from corrupt dictatorships--and are winning the fight so far.
Following the publication of these demands LSE students will occupy a space on LSE campus.