After being dragged from the entrance, O'Reilly refused to co-operate sitting on the road surrounded by police and a huge media scrum. From that position he addressed the media and the police stating, "Bradey Manning is presently being tortured in Quantico U.S. Marine Base, and Julian Assange is being pursued and persecuted here in London, for one reason only, their resistance to these immoral, illegal unwinnable wars on Iraq and Afghanistan. The footage that Manning is accused of leaking, and Assange has published, exposes the massacre of people like you unarmed journalists doing their job in Baghdad as you are doing yours today. The footage reveals the barbarism of the United States war machine in Iraq showing the slaughter of unarmed journalists and civilians, followed by the attack on the Iraqi adults and children who come to tend the wounded and bury the dead. The United States has made the acts of mercy a capitol offence. As Cathic Workers we refuse to tolerate this!

This war has infected every instirution in our society from the housebroken silence of our churches to the censorship of the media to the conivance of the courts such as this one here today in service of the U.S. military!"

A dozen Catholic Workers had gathered outside Woolwich Court/Belmarsh Prison with another dozen members of Anonymous and WikiLeaks Support respectfully reading out the names of British military and Afghani civilian war dead as Assange's extradition was being recited in the court.

O'Reilly had recently returned from Ireland where he was campaigning, in the leadup to the Irish elections, to grant citizenship and offer sanctuary to Bradley Manning. Like most U.S. troops invading Iraq, Manning departed to the war on Iraq through Shannon Airport, County Clare, Ireland.

Ciaron and Roland Blockading the Gate 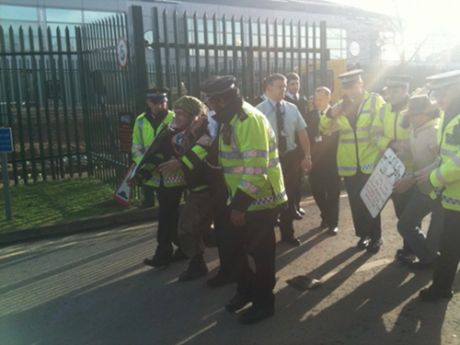 Ciaron and Roland Dragged away from the Gate 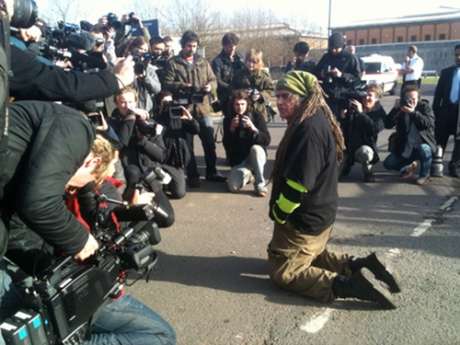 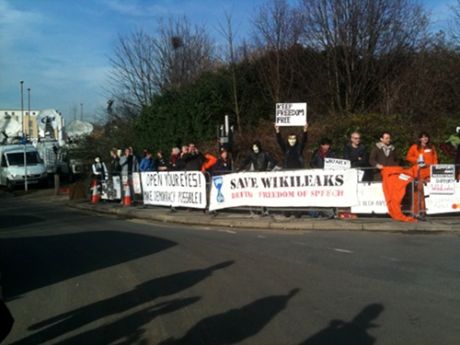 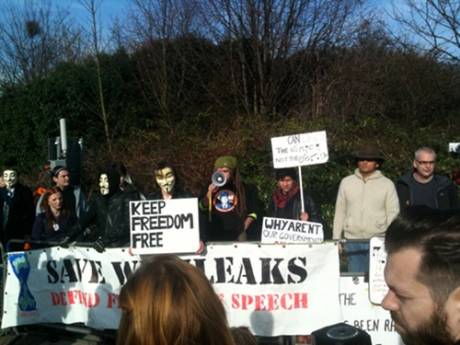 Find attached some photos of our action (taken by Maria of CW Farmhouse) as Roland and I blockaded Woolwich Courts/London following the recital of Julian Assange's extradition verdict by the magistrate (author!?? author!???).

We made our move immediately after Julian, who we could see at distance in the courtyard, had finished his press conference. We knelt in front of the then raised boom gate leading into the courtyard. We held signs "Free Bradley Manning! Free Julian Assange! End the War!" and the Phil Berrigan quote "If they come for the innocent without stepping over your body, Cursed be your religion and your life!"

We were approached immeidiatey by the senior poice officer guarding the gate who demanded we move. We refused. Sue, through the megaphone at the vigil space, began to announce our action to fellow vigilers and the world's media who were still some 40 metres behind us.

The senior officer returned promptly with a man in civvies who bent over toward me and demanded we leave. His laminated i.d. badge was literally and lightly swinging from his neck and hitting me in the face as he did so.

To buy some time for the media to cop on and take up position I said, "Well who are you?"
He told me.
To buy some more time, I responded, "I want to see some i.d.?"
He actually held his laminated card still in front of my face before they all realised I was taking the piss.
By this time the media had surrounded us and they began dragging us.

Despite, what Janet Jackson would refer to as, a "wardrobe malfunction" where my bare butt was momentaily exposed to the world's media (my punk studded belt wasn't doing its job), the cops were being pretty careful under such great scrutiny. Best responses to the bare butt photo this far......
"Cops dack Ciaron!: Genny, Wales.
"Pogue Mahone" Jimmy ex-Dub, Brisbane

The cops dragging me stopped to rest after a couple of yards. We held up our signs through their legs and I kept speaking to the issues at hand - the ongoing torture of Bradley Manning, the persecution of Julian Assange, the war, the journalist victims in in the footage Manning is accused of releasing.
The cops ordered me to move again.
I asked if I was under arrest?
They said no.
I said, well I'm not moving!

The vehicle carrying Julian Assange stopped and someone got out to see if we were ok. The police ordered them back into the vehicle and to move immeidately.

They dragged me some more until the entrance to the court was clear and dumped me in the roadway with heaps of media, so were now effectively blockading the entrance to Catgory A Belmarsh Prison. Fine by me! Did some more speaking and that was it.

Photos and footage of the action have appeared in the Washington Post, Yahoo News, Associated Press, Forbes, and the Times of India Lots of folks around the globe have made contact wondering if we are ok.
Roland and I are fine. We have known each other for 28 years and have been dragged through various jails in various jurisdictions over that time.

Hopefully our small action gave Julian, and a lot of you, a lift and sends out a message that there are still folks resisting this war.

Great article, I was beginning to worry a little with the new Pope, but I see now there is still true believers in the Catholic Church to today. That is needed and just on time. My informations are that just over 30% of Catholic members believe in true communism as taught by the world's people. Christ was that way in the non-belief in the Roman Slavholders Imperium that murdered and enslaved the peoples. He could forgive the peoples althought he wished they would liberate him, but he never could forgive the Imperialist Roman Soldiers that murdered him, because of which he resisted them. As the peoples did not have a liberation army he knew they could not liberate him. Spartacus was the anti-war hero to the worlds workers in Christs time, who stood against chattel slavery, as did Christ. He still is in a majority sense of the word. Workers of the world, unite!!!

Church of Rome must fall...