The tide of media disinformation: First Egypt, next Venezuela?

As the wave of popular uprisings has spread across the Arab world, a flurry of articles have appeared suggesting Venezuelan President Hugo Chavez could be the next “dictator” to be overthrown.

Such arguments follow a pattern in the corporate media of slandering the Chavez government and the revolutionary process it leads.

They aim to conceal the real threat that haunts imperialism: that the Arab world may follow the example of Venezuela and other countries in Latin America — and break away from Western hegemony. 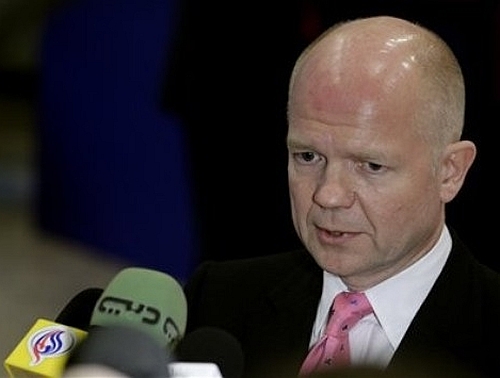 
The tide of media disinformation: First Egypt, next Venezuela?


As the wave of popular uprisings has spread across the Arab world, a flurry of articles have appeared suggesting Venezuelan President Hugo Chavez could be the next “dictator” to be overthrown.

Such arguments follow a pattern in the corporate media of slandering the Chavez government and the revolutionary process it leads.

They aim to conceal the real threat that haunts imperialism: that the Arab world may follow the example of Venezuela and other countries in Latin America — and break away from Western hegemony.

Particularly cynical were the comments by British foreign secretary William Hague, who falsely alleged Libyan leader Muammar Gaddafi had fled to Venezuela on February 21. This triggered a spate of headlines tying “Venezuela” and “Libya” together — despite the fact the allegation was untrue

A February 2 editorial by the Miami Herald claimed: “With dictators toppling like dominoes across the Middle East, Venezuela’s president-for-life, Hugo Chavez, is signaling worry about his own despotic rule.”

The article ignores the fact that Chavez was overwhelming elected as president in three elections supervised by numerous international observers. All up, pro-Chavez forces have won more than a dozen national elections, all verified as free and fair, since 1998.

With new elections set for 2012, Chavez maintains more than 50% support — even in polls commissioned by the US-funded opposition.

Israeli Prime Minister Shimon Peres went further when he listed Chavez along with Iranian leader Mahmoud Ahmadinejad as two despots corrupted by oil that must be eliminated.

“I believe the world should get rid of oil and tyranny, both of them together are dangerous,” Peres said, VoiceofAmerica.com reported on February 23.

Peres was at least more honest than most, adding that his reason was because Europe has to pay higher oil prices due to the “whims of some producer countries”.

The reality is that as US hegemony is being challenged by the popular uprisings in the Arab world, right-wing commentators and policy-makers are scrambling to spin the situation to their own advantage.

They are singling out governments outside of US control as possible targets for enforced “regime change” from outside.

Responding to the idea that Venezuela could be next, Chavez noted on February 18 that what was occurring in Egypt “started here a while ago. We have been in rebellion for a while now, in a revolutionary rebellion.”

Chavez said that rebellion began in Venezuela with the February 1989 popular uprising known as the Caracazo.

As a result of International Monetary Fund-imposed hikes in fuel prices, tens of thousands of Venezuelans poured onto the streets of Caracas and other major cities to protest against the neoliberal measure.

A brutal crackdown left an estimated 4000 dead and temporarily quelled the rebellion.

However, the fervour continued in Venezuelan society, leading to Chavez’s election in 1998 on an anti-neoliberal platform.

Chavez said: “What happened in Egypt — and which has not finished — is a sudden awakening of people’s power. We have only seen the first waves.

“They are events that mark a new phase of history in the entire world.”

One of Chavez’s first moves by Chavez when he was elected was to strengthen the Organisation of the Petroleum Exporting Countries and use it to negotiate a more just oil price for countries dependent on oil revenues.

Chavez also took back government control over Venezuela’s nominally state-run oil industry. These moves have allowed his government to pour much of the oil revenue into social programs.

These wide-ranging programs eradicated illiteracy and extended free education and healthcare to the most needy. They have also been crucial to the process of expanding community control over the running their affairs.

The Chavez government has also used oil revenues to seek to develop other sectors of the economy to help break oil dependency.

To follow the mainstream media, you would get the impression the Chavez government is working overtime to silence freedom of speech. The reality, however, is not one TV station or newspaper has been closed down — and the overwhelming majority are virulently anti-government.

On the other hand, hundreds of new community radio stations have flourishing in the impoverished barrios, extending free speech to those who have never had the opportunity to exercise it before.

The US-backed dictators in the Arab world have consistently placed relations with Israel above the interests of the Palestinian people — despite the popular sympathy for the Palestinian cause among Arab people.

Chavez’s government, and Bolivia’s radical president Evo Morales, have gone further. They broke all diplomatic relations with Israel after its brutal onslaught against Gaza in 2009.

Andelfo Garcia, a former foreign minister of the most loyal US ally in the region, Colombia, said in the February 19 Miami Herald that this move is just one more sign that South American countries are no longer simply adopting US foreign policy as their own.

“It’s like a wave rolling through Latin America,” he said. “The region has its own vision and wants to play a larger role [on the world stage].”

Venezuela has been in the forefront of moves towards greater regional integration, and a shift away from traditional dependence on trade with the US — as well as greater trade and dialogue with other parts of the Third World, such as the Middle East.

The US and Israel are terrified of the threat of something similar occurring in the Arab world — should the democratic revolutions be successful and extend to exerting democratic control over oil and other resources.

It also helps explain why Chavez is hailed by so many in the Arab world as a hero.

However, as Santiago Alba Rico and Alma Allende said in a February 24 Rebelion article “From the Arab world to Latin America”, Venezuela and Cuba’s reluctance to clearly condemn the brutal repression being carried out by the regime of Muammar Gaddafi’s against a popular revolt will have negative consequences for the anti-imperialist project in Latin America.

Venezuela and Cuba have called for a “peaceful resolution” to the violence in Libya and warned the West could use the bloody scenes as an excuse to intervene.

The Arab revolt represents both an “economic revolt” and a “democratic, nationalist and anti-colonial revolution”, they said, that “provides the socialist left and pan-Arabists in the region with an unexpected opportunity”.

They said: “the Arab people, who have returned to the world stage, need the support of their Latin American brothers”.

The pioneering processes of liberation in Latin America, is a symbol of hope for the global anti-imperialist struggle. Therefore, left-wing Latin American governments should unreservedly support the peoples of the Arab world.

This would pre-empt the strategy of the Western powers, which are trying to relegitimise themselves as champions of “human rights and democracy” and may seek to use Gaddafi’s crimes as an excuse to intervene militarily.

Ignoring the brutal reality of Gaddafi, who has been a friend in recent years of the West and its allied dictators, risks breaking ties with popular Arab movements, they pointed out.

It could also give legitimacy to the false accusations thrown at Venezuela and Cuba by imperialism.

They added: “Hopefully Gaddafi will fall — today better that tomorrow.”

They said the wave of revolts in the Arab world could connect with the revolutionary processes in Latin America. They wrote: “The opportunity is great and could be the last to definitively reverse the current balance of forces and isolate the imperialist powers in a new global framework.”

One thing is clear, just as the US has sought to prop up dictatorships in the Arab world, it will continue its struggle to defeat the popular revolutionary movements in Latin America.

Eva Golinger said in Correo del Orinoco International on February 18 that US President Barack Obama had requested US$5 million dollars in special funding from the US Congress special funding for anti-Chavez groups in the 2012 budget.

On February 18 Venezuelanalysis.com said that Venezuelan parliamentarians had condemned threats from Republican congressmen and the newly appointed chair of the House sub-committee on foreign affairs for the Western hemisphere, Connie Mack.

Mack, has called for a “full-scale economic embargo” against Venezuela.

The real threat to Venezuelan democracy, as across Latin America and the Arab world, comes from the US Empire.