If you live in the England, Scotland, Wales or Northern Ireland then I would also like you to break the law. We can do it together, and I know for a fact that an awful lot of people will be doing the same. 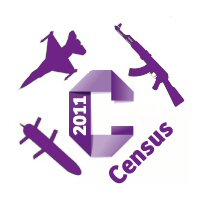 The UK Census 2011 is being held on March 27, and everyone is expected to have their details recorded and sent back to the government for processing. Except it won’t, because it is not the job of the government to do the processing – and that is the key to why I will be breaking the law.

"The review team are aware that this has been a matter of public interest and note that the use of UK and EU subcontractors places Lockheed-Martin UK at arm’s length from the data gathered in England and Wales, and Northern Ireland. Once the data capture infrastructure has been completed. there will be a ‘scrubbing’ stage in which all routes of access for Lockheed-Martin UK employees will be removed and the Census Ofices will formally assume control, with Steria, an EU company, undertaking the necessary data management and administrative functions. There have been public assurances that the contractual arrangements have been structured to ensure that only sub-contractors registered and based in the UK, and either UK or EU owned, will have access to personal census data. No Lockheed-Martin staff (from either the US parent or UK company) will have access to any personal census data. The approach adopted by GROS [General Register Office for Scotland] has been similar, and GROS will play a major role in controlling access to the infrastructure used for processing data supplied in the 2011 Census. It is a condition of the contract with CACI (UK) that personal census information will not leave the UK. GROS have confirmed that CACI (UK)’s sub-contractors with access to 2011 Census data have no US links and that the Act, therefore, does not apply to them. GROS have also given public assurances on contractor confidentiality in this area."

It is important to note that under Patriot Act rules, any data processed by a US company for any reason can legally (under US law) be utilised for the purposes of National Security. In the case of the UK Census it is of great interest to National Security who has whatever name, living in whatever place, having whatever religious beliefs, holding whatever passport and having whatever country of origin (and maybe staying in whatever country for more than 30 days a year). This information is being collected, and there is nothing any foreign government can do to legally stop the US government and its agencies from using that data if the data gets into the US-based processing facilities of either Lockheed-Martin or CACI International Inc.

This fact has been recognised by the Office of National Statistics, revealed in a startling passage:

"Concerns expressed about the possibility of the US Patriot Act being used by US intelligence services have been addressed by a number of additional contractual and operational safeguards. These arrangements have been put in place to ensure to that US authorities are unable to access census data."

The ONS know they have no legal powers to prevent the access to data, so they are merely going to try and do their best to make sure it can’t happen. Yeah, right!

And that isn’t even the major issue. As mentioned above, both of the companies involved in gathering and carrying out the initial data processing are involved in providing arms (in one case) and services (in both cases) to military operations.

The Office of National Statistics has awarded the England, Wales and Northern Ireland contract to Lockheed Martin, one of the largest arms companies in the world. From their own website:

"While a pilot engaging an enemy in armed conflict is a defining moment, air power is more than just aircraft. Air power includes actual aircraft, training, focused logistics, munitions, and even targeting and navigation systems – all the interconnected pieces necessary to complete their missions successfully. Lockheed Martin is a global leader in the design, manufacture and support of military aircraft."

"Lockheed Martin provides high altitude airborne reconnaissance that includes state of the art imagery sensors that collect intelligence in all weather and light conditions. This enables the warfighter to download and transmit data in real time via satellite to multiple ground stations and other manned and unmanned aircraft around the world."

The General Register Office for Scotland has awarded the Scotland contract to CACI (UK) Ltd, a wholly-owned subsidiary of CACI International Inc. From their own website:

"In support of DISA CACI also provides global net-centric solutions to our nation’s warfighters under all conditions of peace and war. CACI is the predominant IT services provider supporting a highly sensitive DISA agency that designs, operates and maintains presidential communication systems. CACI integrated computer network security solutions that formed a network which the National Security Agency (NSA) evaluated as one of the most secure government IT networks in the U.S."

So that is why I will be breaking the law on Sunday March 27, 2011. And that’s why I will be explaining to the census-taker when they come to my door to collect the form that, for both data security and ethical reasons I wish to have no part in the Census. I will not be filling it in.

I know for a fact that I won’t be going to jail, despite what some media sources have been claiming, and I probably won’t even get a fine; but if push comes to shove, here are some other things I might be trying to avoid giving any satisfaction to the peddlers of blood gathering the data:

1) Spoiling the Census form by making it illegible;

2) Filling in vague data that provides no useful information, but is not false in any way;

3) Filibusting on the doorstep, so that the census-taker runs out of time;