According to Police Review, Asistant Commisioner Lynne Owens, [her with the cute smile] is appointed the Containment Manager and will deal with future protest in Central London. 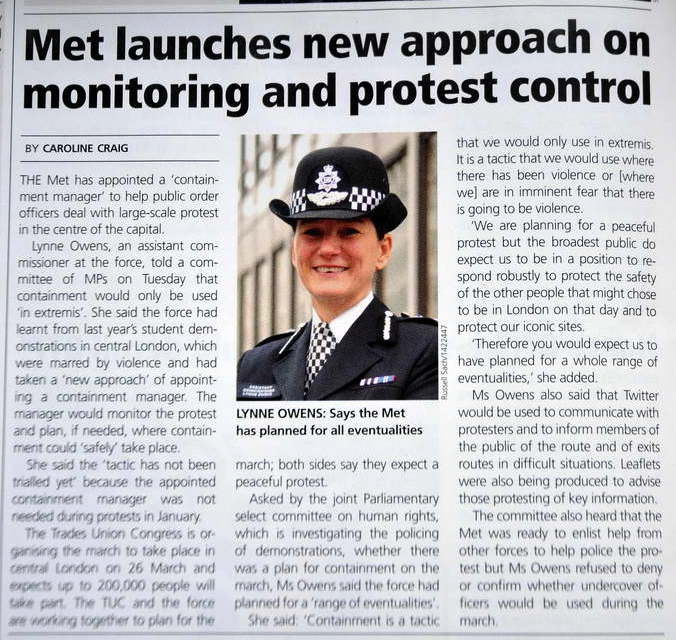 Her first gig will be on the TUC 'anti-cuts' demo on the 26th.

Note at the end that she refused to confirm or deny whether undercover police officers would be used during the march. This is of course, a bit of a departure from Cdr Broadhursts' previous assertion that there were none..

Assistant commissioner Lynne Owens, in charge of policing demos for the Metropolitan Police, also said water and portable toilets would be made available to those who find themselves caught up behind police lines.

In addition Owens told BBC Radio that a "containment manager" would be employed for a TUC anti-cuts protest on March 26 which unions say could attract up to 200,000 marchers.

Owens said the review of how mass protests were policed had been undertaken because student feedback had indicated they did not know how to prepare ahead of marches.

The move follows criticism over the way the police handled a string of student marches in London that culminated in the worst rioting seen the capital for years.

Protesters played cat and mouse with police across the city as they attempted to avoid the kettling tactic.

Union chiefs and the police have asked civil rights group Liberty to act as observers at the March 26 demonstration. Both Scotland Yard and the TUC both expect the march to be peaceful.

The TUC said in a statement: "March for the Alternative will be safe and family friendly. Liberty will provide extra reassurance."