To mark the ninth anniversary of Guantánamo Bay on 11 January 2011, we delivered a letter to the Prime Minister calling on the British government to take more action to see Guantánamo close. We have now received a reply... 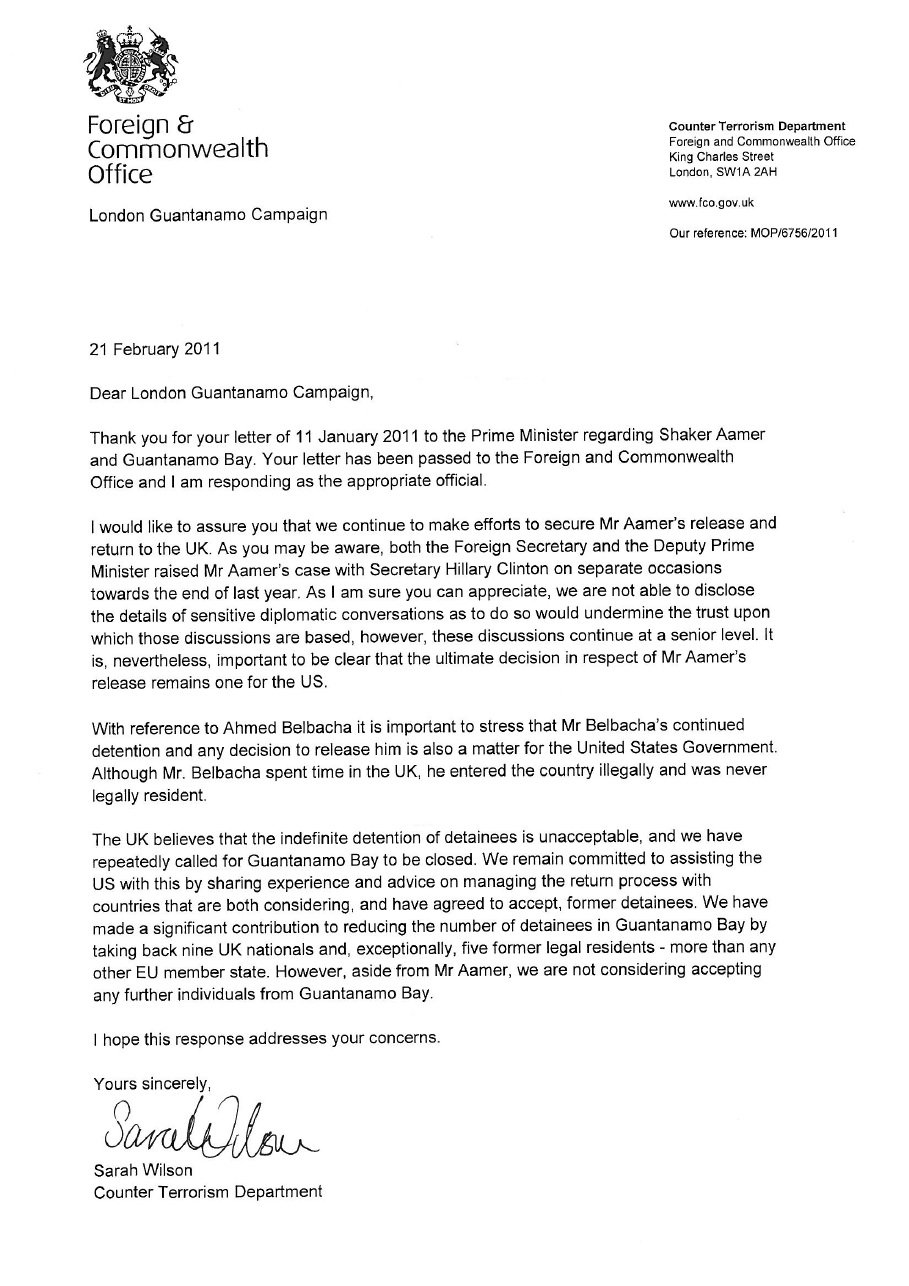 On 11 January this year, as part of our actions to mark the ninth anniversary of Guantánamo Bay, the London Guantánamo Campaign (LGC) delivered a letter to the Prime Minister at Downing Street [

http://londonguantanamocampaign.blogspot.com/2011/01/open-letter-to-prime-minister-david.html] calling on the British government to take action over the closure of Guantánamo and to step up measures to see the illegal prison closed. The letter was signed by 75 individuals and representatives of organisations, including MEPs Baroness Sarah Ludford (Lib Dem) and Jean Lambert (Green) and MPs Caroline Lucas (Green) and John McDonnell (Labour). A short version of the letter was published in the Guardian newspaper on the same day [

http://www.guardian.co.uk/world/2011/jan/11/guantanamo-closure-obama-deadline]. A further 200 signatures were collected on the same letter and posted to Downing Street later in the day during the LGC’s anniversary vigil [

We have now received a response to our letter from the Foreign and Commonwealth Office (FCO) which is woefully inadequate in view of the ongoing detention without trial or charge of over 170 men for over nine years. The letter simply reiterates the same cut-and-paste points this government and its predecessor have churned out in correspondence over the past several years without addressing the concerns raised by campaigners. Contrary to what Ms Wilson claims, unlike many of its European counterparts, the UK has failed to accept any prisoners with no ties to this country and has failed, after more than 9 years, to secure the release of Shaker Aamer, who has a British family and the legal right to remain in the UK. All other European states have managed to repatriate their nationals and residents. It is unfortunate that this government does not wish to follow the good example set by other European states and accept other prisoners.

At the same time, the Obama administration has now confirmed its plans to move ahead with sham trials through military commissions and the indefinite detention of over 40 prisoners. This comes as no surprise with Obama’s record of broken promises over Guantánamo Bay. However such news is no comfort for the prisoners whose present and future remain hostage to the whims of an extra-legal system of arbitrary detention and abuse. Like Obama’s oral assurances at the time, the British government must go beyond its statements and substantiate its commitment to the closure of Guantánamo Bay through actions, such as those demanded in our letter. The LGC will respond to the FCO and invites those who signed the original letter to respond as well.