Libya: A Response to the Escalating Situation 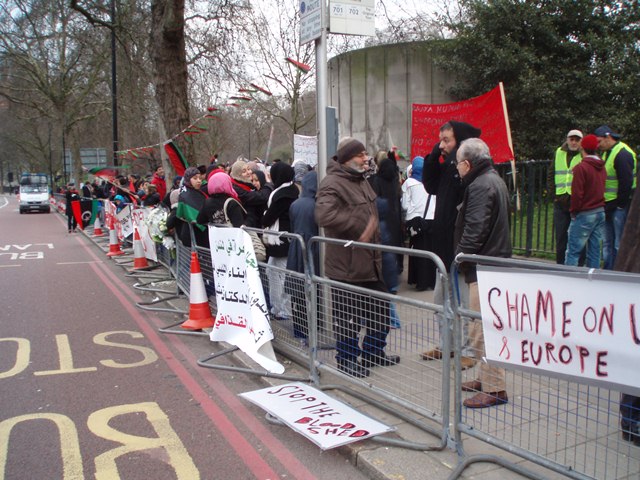 Demonstrators outside the Libyan Embassy on 5 March 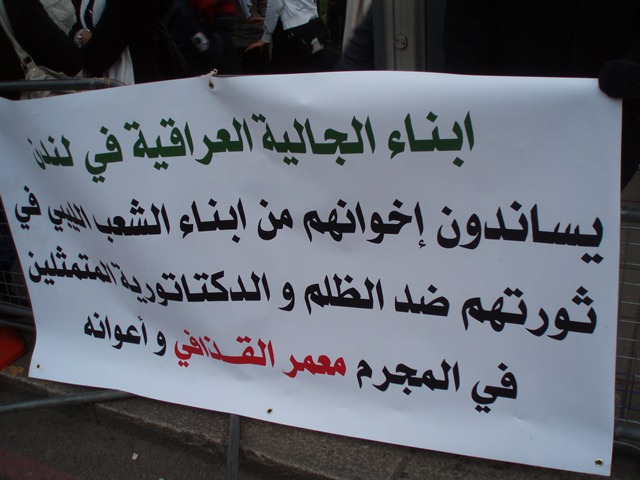 Solidarity from the Iraqi community in London 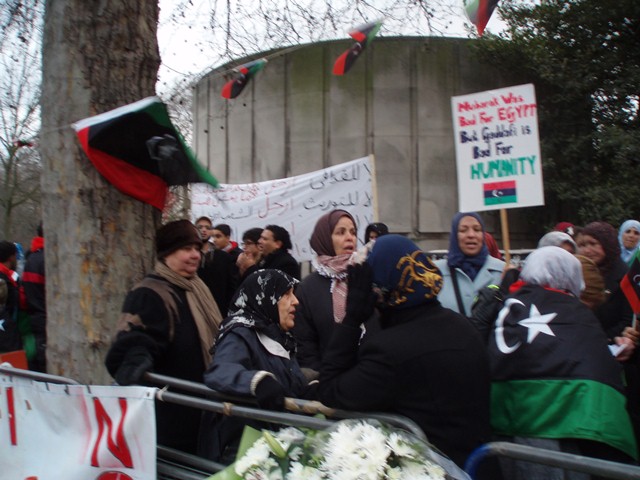 Around 100 people joined a lively peaceful demonstration on 5 March 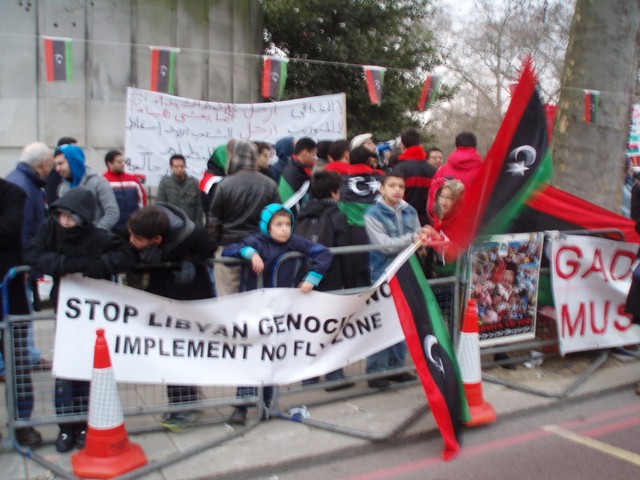 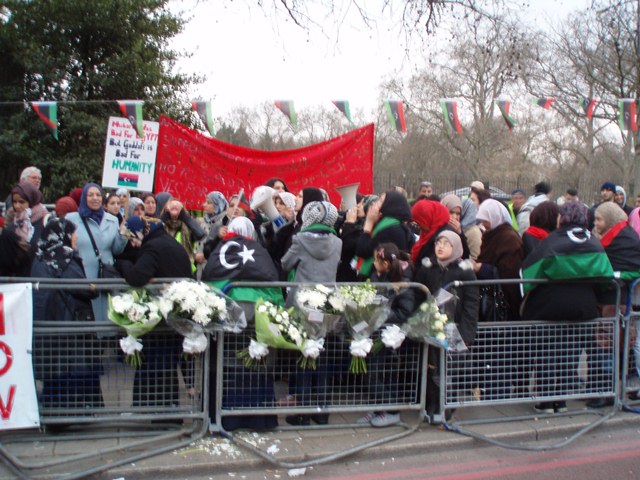 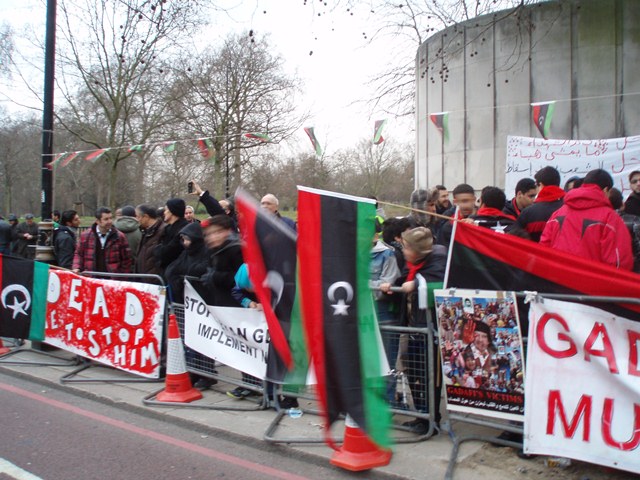 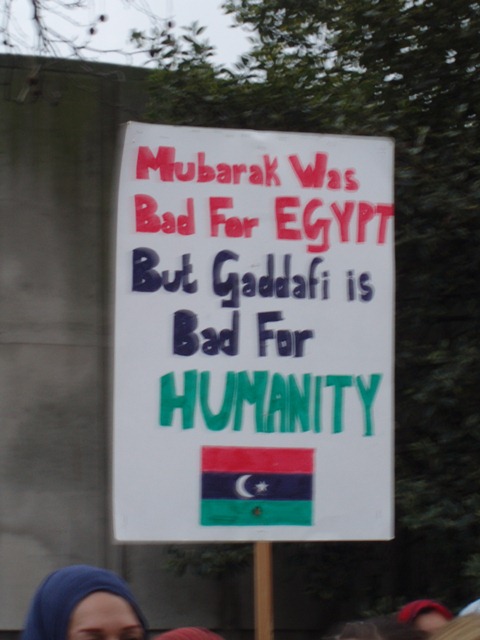 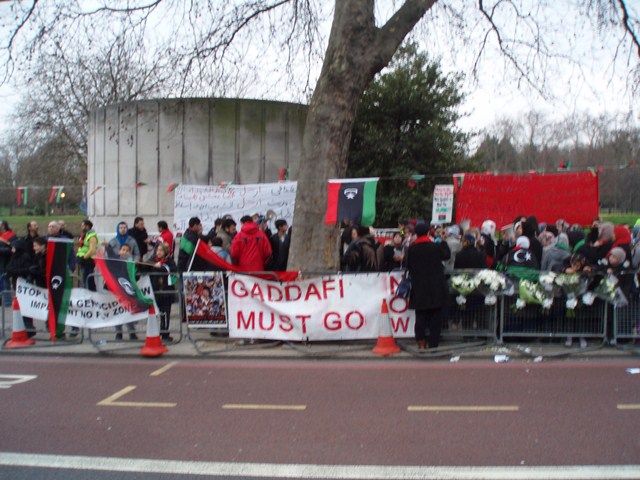 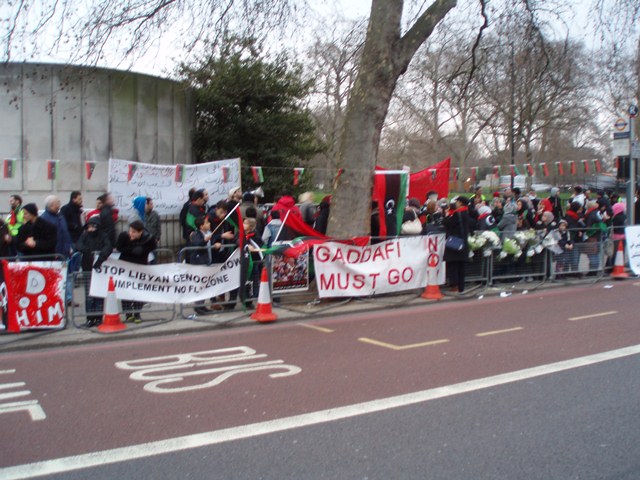 Libya: A Response to the Escalating Situation

It has now been three weeks since the civil uprising in Libya began. Prompted by similar popular actions in other North African countries, the response has been most bloody in Libya, with Colonel Gaddafi vowing to “fight to the last man and woman”. Not one to be outdone in terms of brutality, Gaddafi’s response to peaceful protests has been typically violent, turning the military against the civilian population. The situation has now spiralled into almost all-out civil war. The UN has put the death toll at over 1000. The international community has been slow to react; just last week, Libya was a member of the UN Human Rights Council.

On 2 March, an emergency meeting was held in parliament, hosted by Gisela Stuart MP with the Henry Jackson Society[

http://www.henryjacksonsociety.org/stories.asp?id=1979&pageid=49], to set up the Committee for a Democratic Libya. The meeting was addressed by Lord Trimble and Khaeri Aboushagor, the UK representative of the Libyan League for Human Rights, and was attended by representatives of other Libyan community organisations in the UK. Speakers drew parallels with the situation in Iraq in 1991 and Bosnia in the mid-1990s. The options for a response from Britain and her allies, including military options, were discussed.

One of the Libyan organisations attending the meeting, the British Libyan Solidarity Campaign (BLSC) [www.blsc.org.uk] issued a six-point statement on 5 March calling on the international community to take action to protect the people of Libya. It calls for (1) an immediate UN-policed no-fly zone, (2) UN security for food and medical convoys, (3) strategic assistance including military intelligence and satellite imagery for the Opposition, (4) military supplies for the Opposition and an arms embargo on the Gaddafi regime, (5) UN forces on standby to react in the case of an act of war on the Libyan people and that (6) any UN military action should be withdrawn immediately on demand of the Libyan Opposition. [

The statement starts by saying that “The Libyan people do not want war. They do not want invasion, but they do need protection”. This statement is not an invitation for foreign states to intervene in Libyan sovereignty or to invade; rather it is calling for a “measured and timed temporary response to deal with events on the ground and to defend the legitimate rights of the Libyan people”.

The situation on the ground is constantly escalating as is the violence. Most of the country is currently held by Opposition forces. While no organised opposition to the regime exists following 42 years under a totalitarian regime, a governing structure is starting to come together in the areas they hold, particularly following the resignation and defection of high-level diplomats and politicians under the Gaddafi regime. The Opposition, however, is largely untrained and unarmed. Over the last few days, fierce battles have raged in key towns, with government forces supported by an increasing number of air strikes and far superior weaponry. Government troops entering towns have been reported to have committed atrocities against local communities. There is much fear of aerial attacks by the Opposition forces in Benghazi and Zawiyah, who are calling for a no-fly zone.

Protests have been held in support of the Libyan people all over the UK over the past three weeks, with daily demonstrations outside the Libyan Embassy since 17 February. The pro-Gaddafi demonstrators, whose support had been paid for, have fizzled out and while the green flag of the current regime has returned outside the embassy after having been replaced by the older tricolour flag flown by the Opposition early into the protests, the protesters outside the embassy have made it very clear that while they ardently want the Gaddafi regime gone, they are not interested in seeing it replaced by foreign intervention or invasion.

Aisha Maniar is a human rights activist and writer. The author is not representative of the British Libyan Solidarity Campaign. For more information, please visit www.blsc.org.uk or e-mail