- Catholic Workers Mark M.O.D. with Ash as Trident Poised to Reduce the World to Nuclear Ash! 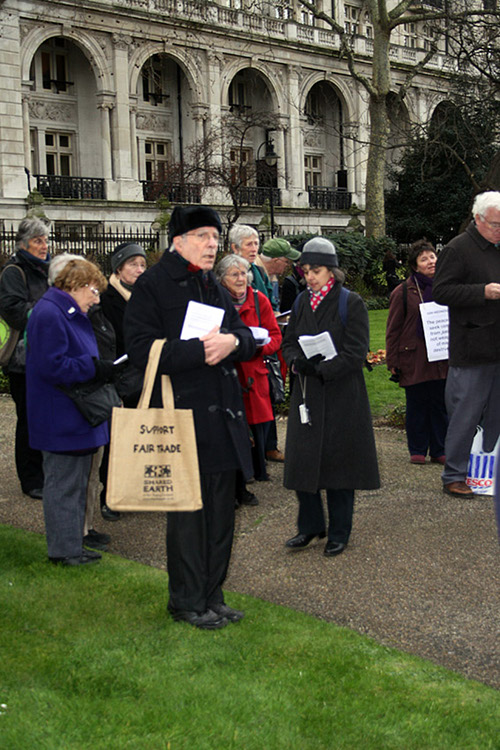 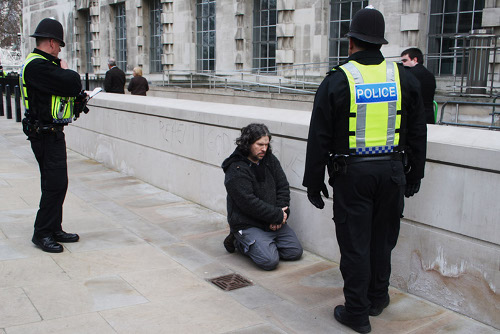 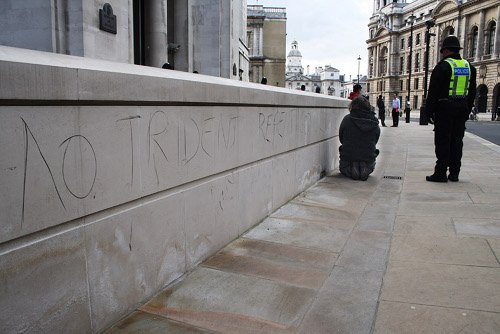 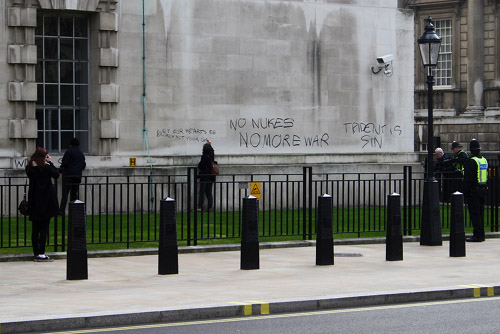 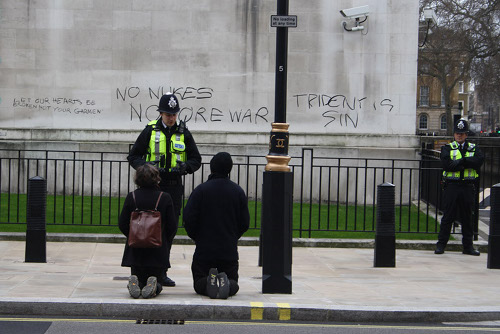 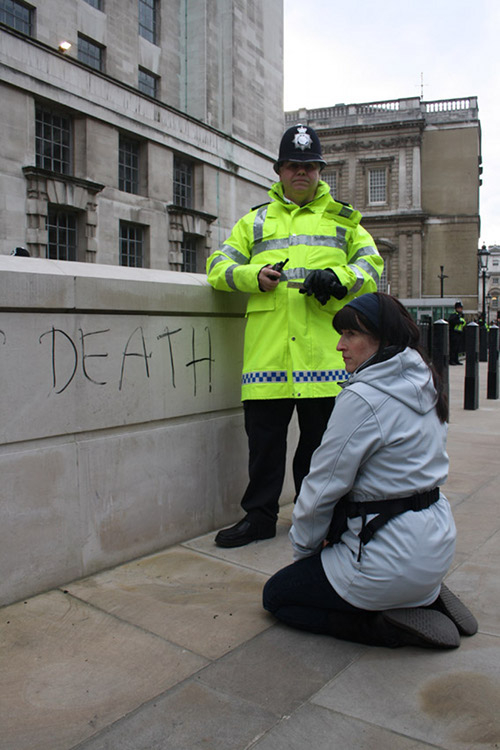 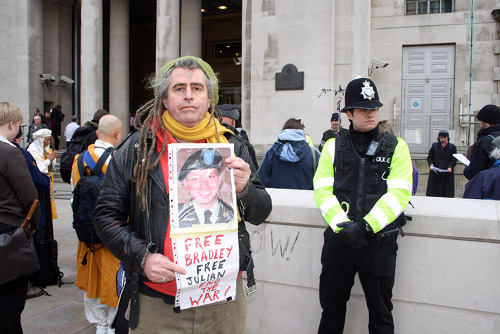 Ash Wednesday in the Catholic Calendar marks the beginning of the season of Lent in preparation for the Holy Week passion and Easter's triumph of life over death.

At noon on Wednesday March 9th., Catholic Workers attended mass at Westminster Cathedral, where foreheads were traditionally marked with ash while words were uttered that remind one of one's own mortality "Remember you are dust and unto dust you shall return!"
Following mass, we chatted with some "Women for Ordination" folks from Warrington vigilling in protest outside the Mass and made our way past institutions that have no sense of humility, their subversion by the prince of darkness or their mortality,
We passed McDonalds, Royal Bank of Scotland, New Scotland Yard, the QE2 Conference Centre, British Parliament before arriving at Downing St. to support a small "Campaign Against the Arms Trade" (CAAT) delegation delivering a petition to British Prime Minister Cameron regarding British arms exports to the Libyan dictator Gadaffi. These British arms are presently being turned by Gadaffi on his own people.

After farewelling the CAAT delegation we crossed Whitehall and walked to the rear of the Ministry of Defence (M.O.D.) buildings to Embankment Gardens on the Thames. By this point there were eleven Catholic Workers present with countries of origin as diverse as Australia, England, Korea, Malaysia, South Korea, Sweden, The Netherlands and the United States. Ages ranged from early 20's to mid-60's with a gender balance favouring women.
We were eventually joined by over a hundred others for a liturgy organised by Pax Christi, Christian Campaign for Nuclear Disarmament (CCND) and the Catholic Worker, welcoming of participation by people of other faiths and no faith traditions, the broader range of nationalities was enhanced with a demographic favouring older folks. The Buddhist nun and monk of Nipponzon Myohoji were present reminding us of the legacy of Hioshima and Nagasaki. Also present were Plowshares activists who had disarmed nuclear weapons systems and people who had worked and lived in war zones from Africa to Palestine to East Timor to the north of Ireland to the Philippines.

The weather held and the liturgy unfolded to address the Lenten theme of repentance in relation to the British state's nuclear warfighting preparations. This Ash Wednesday liturgy and accompanying acts of nonviolent resistance has been undertaken on an annual basis since 1982 when it was initiated by Catholic Peace Action. Arrest and imprisonment have been consequent of many previous Ash Wednesday actions at the M.O.D. over the years.
"Let your hearts be broken, not your garments torn, turn to the Lord your God again, for God is all tenderness and compassion." Joel 2:13 " Repentance means a change of mind and heart. Joel call it heart-break... The call to repentance is a call to the Nation to change political, social and economic structures which oppress and exploit the weak." Fr. Gerry Hughes S.J.
The liturgy remembered the victims of war, the people of Iraq, Afghanistan, Sri Lanka, Congo, Israel, Palestine and indigenous peoples whose land has been stolen and exploited for uranium mining and testing of nuclear weapons. Peace prisoners were also remembered Bradley Manning, Fr. Louis Vitalie OFM Helen Woodson, Rafl Dhafir, Michael Omondi, Nancy Smith, Chris Spicer, Frank Donelly, Carl Steward Norman Lowry Jr and these unknown to us.

At the conclusion of the liturgy the group processed from the gardens following a cross chanting in Latin, "Ubi caritas, et armour. Ubi caritas, Deus ibi est." (Where charity and love are, God is there.) By the time we had processed up the footpath Fr. Martin Newell C.P. of Giuseppe Conlon CW House and Henrietta Cullinan of the CW Urban Table Soup Kitchen had leapt over the M.O.D. railings across the road from the main party marking the M.O.D. with ash and writing in charcoal......
"Repent"
"War is Sin"
"Let Our Hearts be Broken Not Our Garments"
"No Nukes"
"No More War"
"Trident is Sin"

Police who appeared reluctant to jump the railings found their key, opened the gate and detained them. Scott Albrecht, former U.S. Air Force airman who had worked with U.S. nuclear weapons at Lakenheath USAFB in England, from the Catholic Worker Farmhouse crossed the road from the main party dropped to his knees and wrote on the M.O.D. building........
"No Trident"
"God is Love"
"Repent"

The party of over a hundred stopped on two occasions to continue the liturgy before crossing the road. Henrietta, Fr. Martin and Scott remained on their knees as the police questioned them taking details. As the main party arrived at the man entrance to the building, Sr. Susan Clarkson of St. Francis Catholic Worker House Oxford and Maria Albrecht of the Catholic Worker Farmhouse dropped to their knees and wrote on the M.O.D. building......
"Disarm Now"
"No More Ministry of Death"
The five were eventually released by the police and informed of the possibility that they maybe summoned to court at a later date.

On Monday March 28th. the "Disarm Plowshares" Susan Crane, Fr. Bill Bicshel, Susan Crane, Lynn Geenwald will be sentenced in the U.S. for their 2009 "All Souls Day" plowshares action on the U.S.Trident nuclear warfighting system at Naval Base Kitsap, Bangor, Washington state - the largest nuclear weapon storage area in the US. In London we will hold a solidarity vigil at the U.S. Embassy on that day of sentencing.