Vigil in Wrexham for Bradley Manning, for Japan, Iraq and Libya

Ten people held a vigil in Queens Square Wrexham yesterday, Sunday 20 March, observing 20 minutes of silence before being joined by other supporters and passers by over the following hour. 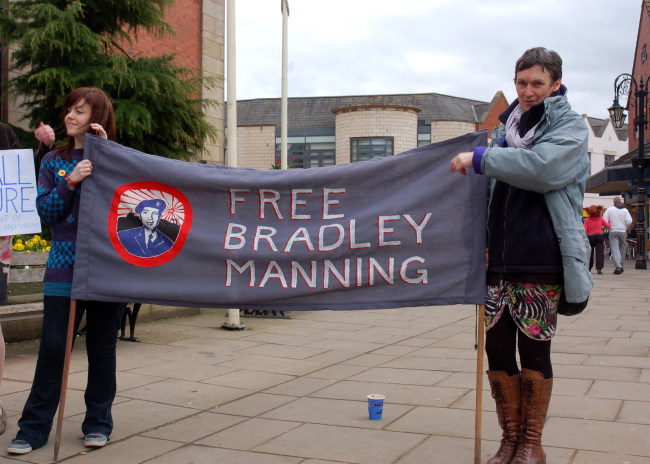 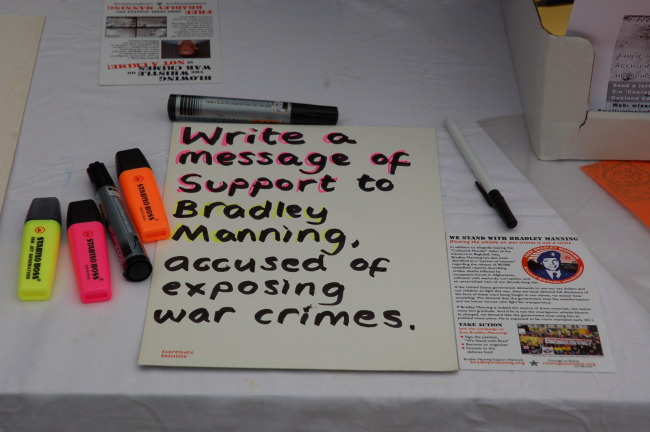 write a message of solidarity to bradley manning 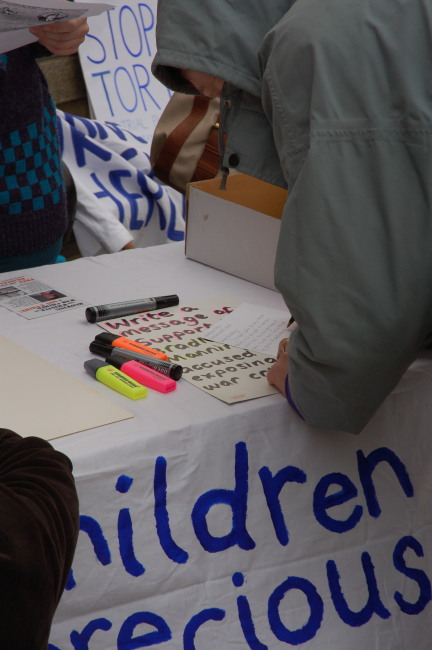 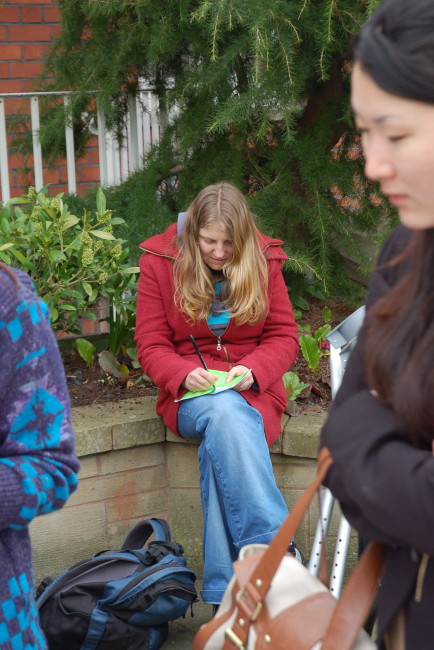 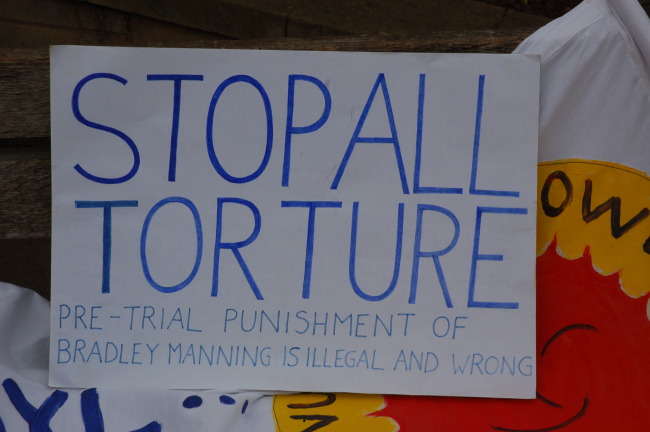 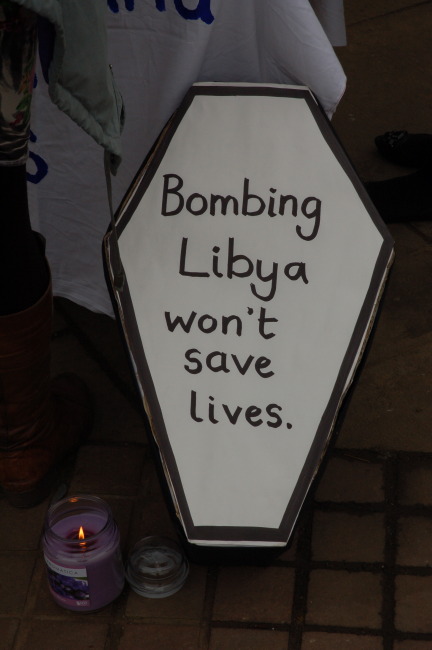 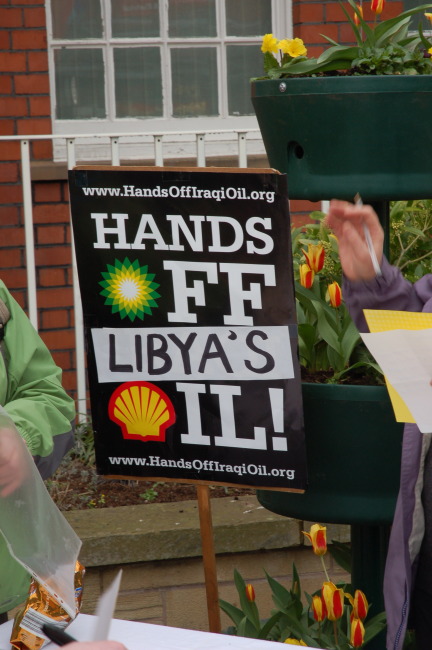 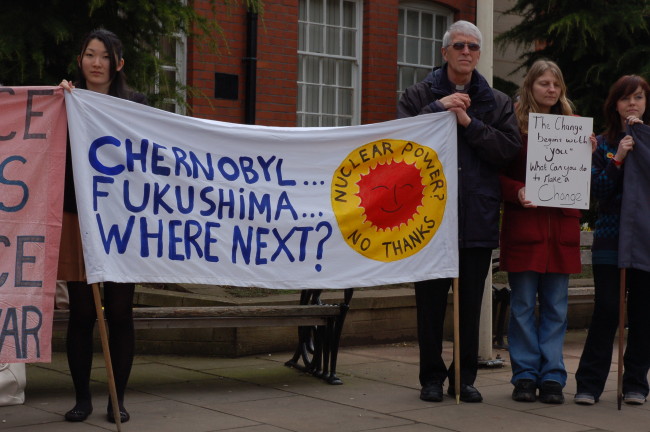 nuclear power, no thanks 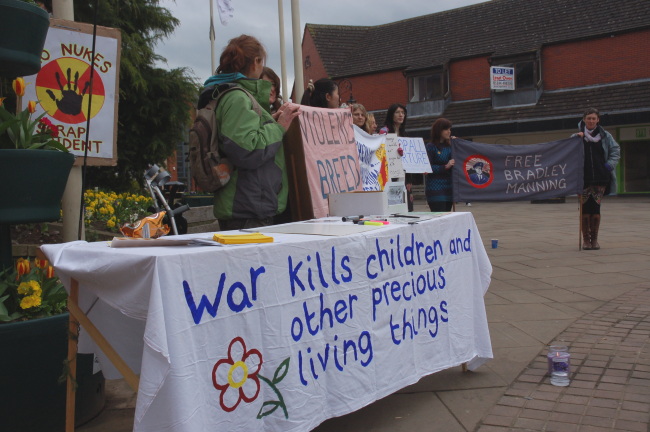 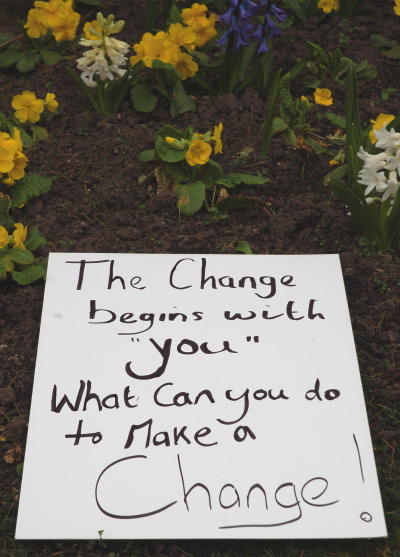 The vigil was held for these concerns:

- FOR THE PEOPLE OF JAPAN, who are facing nuclear catastrophe on top of the earthquake and tsunami they have already suffered
- FOR THE PEOPLE OF IRAQ on this 8th anniversary of the disastrous invasion and occupation of their country which has led to over a million unnecessary deaths and the poisoning of their land forever with radioactive weaponry
- FOR THE PEOPLE OF LIBYA, now facing a similar fate with western military intervention that will only lead to more suffering and bloodshed
- FOR BRADLEY MANNING, who is accused of blowing the whistle on war crimes in Iraq and Afghanistan, held under conditions of torture and facing a possible death penalty while those who perpetrated the crimes he is accused of exposing go free.

The vigil for Bradley Manning was part of worldwide actions which took place on 19 and 20 March, including at the US embassy in London,

at Quantico, Virginia, where Manning is being held under conditions of torture, and around the world:

In Wrexham, participants wrote letters to Bradley Manning which will be forwarded to his supporters to pass on. After the vigil, we were joined by some ex-soldiers who hadn't heard about Bradley Manning before but were concerned about his situation, his treatment, his likely long imprisonment and possible death sentence. They joined in with the letter-writing and took away information to share with their friends.

The vigil for Japan and the people of Fukushima was called for by a coalition of groups including CND, Kick Nuclear and Friends of the Earth.

As well as remembering all those affected by this latest nuclear disaster, we call on the government to drop all plans to build new nuclear power stations in Britain. One of the participants in the vigil spoke afterwards about risk assessment calculations and the fatal consequences of making assumptions about nuclear plant safety which later prove wrong.

We marked the eighth anniversary of the illegal invasion and occupation of Iraq during this vigil, partly because of Bradley Manning's connections (he was an intelligence analyst stationed in Iraq), partly because of the connection with nuclear power production (nuclear waste product Depleted Uranium has now poisoned Iraq's soil forever), and partly in the light of the British government's involvement in the new military misadventure in Libya. We demonstrated in Queen's Square eight years ago when the invasion of Iraq began and it seemed fitting to return here to mark the anniversary.

We held our vigil also for the people of Libya, whose safety and well-being we fear for in the face of western military intervention. We believe this will bring only death and destruction, a plundering of Libya's resources and deny the Libyan people self-determination.

The nuclear disaster in Japan, the Iraq war, the fate of Libya and the plight of Bradley Manning are all inextricably linked in the web of deceit and folly that characterises modern warfare.

The disaster that has befallen the nuclear installation at Fukushima, putting the people of Japan and beyond at deadly peril from radioactive contamination, could just as easily have happened at any water cooled nuclear power plant, irrespective of tsunami and earthquake. Nuclear power only provides about 4% of our total energy needs in Britain; we are already spending many billions of pounds dealing with existing nuclear waste, for which there is no safe means of disposal; there is no reliable mechanism worldwide for ensuring that the Plutonium produced by these plants doesn’t get diverted into military use, the very reason nuclear power plants were first developed with power generation merely a useful by-product. Each nuclear power station is a disaster waiting to happen, wherever it is. We don’t need any more of them. The British government must abandon its plans for a new generation of nuclear power stations and decommission the ones we already have.

This weekend is the 8th anniversary of the US and UK-led invasion of Iraq, that has caused so much suffering… for the Iraqi people, over a million of whom have lost their lives, for the young soldiers killed, maimed or traumatised by the conflict and for their families. Depleted Uranium, a radioactive by-product of the nuclear power industry with a half-life of billions of years has been used in weapons deployed in Iraq and has poisoned the land forever.

We condemn British involvement in military action in Libya. A ‘no fly’ zone and air strikes will not bring peace to Libya any more than they did to Iraq. The Libyan people’s struggle will not be aided by western military action. We cannot allow another war to happen.

Bradley Manning, the young US soldier with Welsh connections, has been held in solitary confinement in conditions which amount to torture, accused of blowing the whistle on war crimes committed in Iraq and Afghanistan and suspected of leaking hundreds of thousands of US diplomatic cables that expose the dark underside of international relations. Documents recently released by WikiLeaks showing existing concerns about the safety of Japan’s nuclear power plants come from this batch of cables.

While campaigning for the US Presidency, Barack Obama said – but now seems to have forgotten – 'Government whistleblowers are part of a healthy democracy and must be protected from reprisal.' We call for Bradley Manning's immediate release. Solidarity with political prisoners is vital and we believe Bradley Manning will be strengthened by knowing that people in Wales support him and are calling for his release.