Libya: Yet More Blood For Oil

On the eighth anniversary of the 'shock and awe' intro to the Iraq invasion, western forces launched yet another imperial 'intervention' in the Middle East. While Obama and Cameron want to distance themselves from Bush and Blair's bloodsoaked legacy, they are once again fighting a war in defence of oil profits. 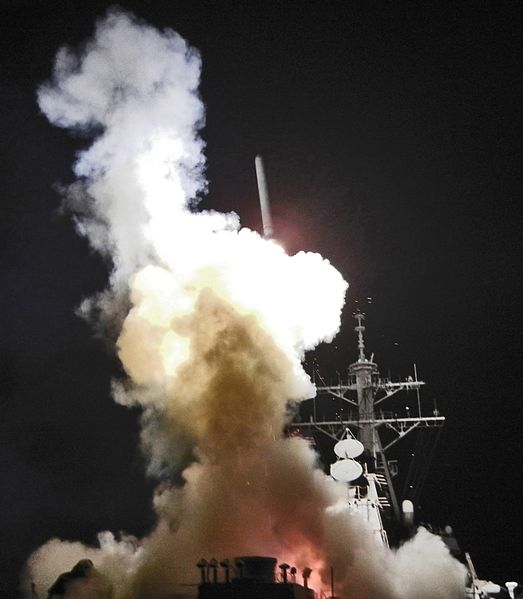 Destroyer the USS Barry fires a Tomahawk missile, to protect people. But who? 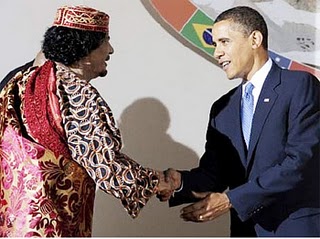 Almost a month ago, when oil prices spiked and leading politicians started talking about examining "all possible options", I warned that:

"If some combination of western forces are unleashed on Libya, it will be to guarantee that the oil keeps flowing to Europe. Though it would no doubt be dressed up as a humanitarian intervention, humanitarian concerns would be an irrelevance compared to the dollar, and attempts to maintain US hegemony in the area."

Precisely this has now taken place. On the ridiculous and transparent pretext of protecting rebels from state violence, the US, UK and France amongst others are now raining death from the Libyan skies. This, we were told before the invasion began, would be to establish a 'no-fly zone'. The bombing of Gaddafi's Bab al Azizia compound has shown this to be an embarrassingly inadequate 'humanitarian' figleaf for murder and plunder. According to the Daily Mail, MI6 agents are phoning army generals and making them an offer they can't refuse - defect to the National Transitional Council or die. Meanwhile, Libyan state media has reported that a children's hospital was destroyed on Saturday night.

Imperialist policy is always characterised by breathtaking hypocrisy, but the current Arab uprisings are forcing Obama, Clinton, Cameron and the like into statements that would have made George Orwell's head spin. In launching his first war, Obama declared that: "we cannot stand idly by when a tyrant tells his people that there will be no mercy, and his forces step up their assaults". Yet this is precisely what is also happening in Yemen and Bahrain, where US-backed dictators are trying to massacre and intimidate their popular, using US-supplied weapons in the hands of US-trained forces.

The US position on Egypt is no less absurd. Last week, Hillary Clinton toured Tahrir Square - the Cairo home of the movement that toppled Mubarak, another longtime US ally. “To see where this revolution happened and all that it has meant to the world is extraordinary for me”, she gushed. It was “just thrilling to see where this happened.” This, just seven weeks after she described the hated despot as "looking for ways to respond to the legitimate needs and interests of the Egyptian people."

As I explained in my previous post on Libya, the nation has had a long and complicated relationship with western imperialism. However, Gaddafi had been in the fold for seven years before the uprising against him began, with much oil flowing to Europe, and big name politicians such as Tony Blair and Silvio Berlusconi forming whatever 'friendships' can exist between such people. Only when the tide seemed to turn against Gaddafi did Obama and Clinton publicly contemplate attacking the country, and enforcing its own will - the more thorough exploitation of Libyan oil resources by the participating 'coalition'.

Another consideration for the ruling elites in Washington, London and Paris will be the importance of gaining a military foothold in a country that borders Egypt and Tunisia - where protesters are showing that the removal of their respective dictators has not satisfied them, and that they hunger for improved social conditions. Such demands are already putting them into conflict with the new regimes, and so will necessitate yet more revolutionary struggles in the months to come. There is a real danger that - once the Gaddafi regime has been overthrown - the forces stationed in Libya will put to use against revolutionary movements throughout the region.

Of course, none of this has been picked up by the corporate media, which from its jingoist wing in The Sun to the 'anti-war' wing in The Independent have fallen lock-step behind the politicians. The lessons of Iraq have not been learned by 'mainstream' journalists, but they have been learned by the vast majority of working class people in each of the invading nations. With the Libyan mission costing the UK government £3 million a day - money which will be clawed out of our backs in George Osbourne's budget tomorrow - it is we, not our rulers, who are potentially the greatest allies of those suffering in North Africa, and elsewhere in the Middle East.