Support vigil outside the US embassy, Grosvenor Square in solidarity with the five Disarm Now Plowshares activists about to face sentencing in the US for their major nuclear disarmament action in November 2009. 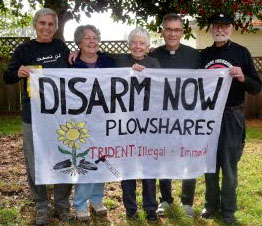 London Vigil in Solidarity with the Disarm Now Plowshares Five!

In the early hours of 2 November, 2009, five veteran peace activists were arrested at Naval Base Kitsap-Bangor, Washington, USA. Their crime? Cutting fences and walking onto the grounds of the Trident strategic nuclear weapons facility. They carried a banner, trailed blood, and scattered sunflower seeds, and hammered symbolically for disarmament.

They say: "As U.S. citizens we are responsible under the Nuremberg Principles for this threat of first-strike terrorism hanging over the community of nations, rich and poor."

On December 13, 2010, a federal jury found the five guilty of trespass, felony damage to federal property, felony injury to property and felony conspiracy to damage property.

On Monday 28 March, they will return to court to discover their fate. Each defendant faces possible sentences of up to ten years in prison, for their 'crimes': trying to prevent nuclear war crimes and crimes against humanity.

Bring banners, placards, peace flags, tea lights in jam jars, and hope for a peaceful future without the threat of nuclear annihilation.

This vigil has been called by members of London Catholic Worker, Figtree and Trident Ploughshares

The Disarm Now Plowshares activists who entered a U.S. Navy Trident nuclear submarine base and nuclear weapons storage depot will be sentenced on Monday, March 28, 2011 beginning at 9:00 AM at the Tacoma Courthouse, U.S. District Court for the Western District of Washington.

The Disarm Now Plowshares co-defendants, Bill “Bix” Bichsel, SJ, Susan Crane, Lynne Greenwald, Steve Kelly, SJ, and Anne Montgomery, RSCJ, challenged the legality and morality of the US storage and threat of use of thermonuclear missiles by Trident nuclear submarines stationed at the Kitsap-Bangor Naval Base outside Bremerton Washington. They entered the U.S. Navy’s nuclear weapons storage depot at Bangor, Washington to symbolically disarm the nuclear weapons stored there, and expose the illegality of the government's continued preparations for nuclear war.

The five admitted from the start that they cut through the chain link fence surrounding the Navy base during the night of All Souls, November 2, 2009. They then walked undetected for hours nearly four miles inside the base to their target, the Strategic Weapons Facility-Pacific. This top security area is where activists say hundreds of nuclear missiles are stored in bunkers. There they cut through two more barbed wire fences and went inside. They put up two big banners which said "Disarm Now Plowshares: Trident Illegal and Immoral," scattered sunflower seeds, and prayed until they were arrested at dawn. Once arrested, the five were cuffed and hooded with sand bags because the marine in charge testified "when we secure prisoners anywhere in Iraq or Afghanistan we hood them...so we did it to them."

Eight Trident nuclear submarines have their home port at the Kitsap-Bangor base. Each Trident submarine has 24 nuclear missiles on it. Each one of the missiles has multiple warheads in it and each warhead has many times the destructive power of the weapon used on Hiroshima. One fully loaded Trident submarine carries 192 warheads, each designed to explode with the power of between 100 and 475 kilotons of TNT force. In addition to the missiles on the submarines, the base has an extensive bunker area where more missiles are stored. That storage area is the Strategic Weapons Facility-Pacific. That is where the activists made their stand for disarmament.

The December 2010 trial brought peace activists from around the world to challenge the US use of the Trident nuclear weapons. Angie Zelter, internationally known author and activist from the UK, testified about the resistance to Trident weapons in Europe. Stephen Leeper, Chair of the Peace Culture Foundation in Hiroshima, told the jury "the world is facing a critical moment" because of the existence and proliferation of nuclear weapons. Though prohibited from testifying about the details of the death, destruction, and genetic damage to civilians from the US nuclear attack on Hiroshima, he testified defendants "have a tremendous amount of support in Hiroshima." Retired US Navy Captain Thomas Rogers, 31 years in the Navy, including several years as Commander of a nuclear submarine, told the court he thought the US possession of nuclear weapons after the Cold War was illegal and immoral. When asked how these weapons would impact civilians, he responded "it is really hard to detonate a 475 kiloton nuclear device without killing civilians." Dr. David Hall of Physicians for Social Responsibility testified about the humanitarian core beliefs of the defendants. And Professor and author Michael Honey told the jury about the importance of nonviolent direct action in bringing about social change.

The peace activists, who represented themselves with lawyers as stand by counsel, tried to present evidence about nuclear weapons despite repeated objections. At one point, Sr. Anne Montgomery challenged the prosecutors and the court: "Why are we so afraid to discuss the fact that there are nuclear weapons?" Montgomery, who is in her 80's engaged in her first Plowshares action in 1980 as a member of the "Plowshares Eight."

The government testified that it took about five hours to patch the holes in the fences and most of the day to replace the alarm system around the nuclear weapons storage area. Discovery documents indicate that work on "RBs" (which would be Re-entry Bodies to which nuclear warheads are affixed) was stopped for an entire shift.

The extensive peace community gathered at the courthouse during the trial supported the defendants and promised to continue to protest against the Trident and its weapons of mass destruction. They echoed the words of one of prospective jurors who was excluded from the trial because, when asked whether he would follow the instructions of the judge in this case, said "I totally respect the rule of law, but some laws are meant to be broken, that is how things change."

After difficult deliberations the jury finally found all five co-defendants guilty on all charges of Conspiracy, Trespass, Destruction of Property on a Naval Installation and Depredation of Government Property. The major consequences for the various individual charges range between 5 and 10 years in prison, and from $50, 000 to $250,000 in fines, as well as up to 3 years of supervised release, and/or up to 5 years probation.

Judge Benjamin Settle, who presided over the trial, will hand down the sentences beginning at 9:00 am on Monday, March 28, 2011.

Despite the outcome of sentencing, the Disarm Now Plowshares defendants will continue to exercise their rights and responsibilities as citizens to bear witness to the unlawfulness of the Trident system under both U.S. law and international humanitarian law.

Supporters of the Disarm Now Plowshares will vigil in front of the Tacoma Union Station Courthouse beginning at 8:00 am on the 28th.

Disarm Now Plowshares members and supporters will hold a vigil on the Saturday prior to sentencing at the Main Gate at the Bangor Trident base from 1:00 to 2:00 PM. On Sunday, in addition to a mass at St. Leo Church in Tacoma conducted by Fr. Patrick Lee, SJ, there will be an evening Festival of Hope at St. Leo's. Among the speakers will be Bishop Thomas Gumbleton, longtime peace activist and founding member of Pax Christi.
There have been more than 100 Plowshares Nuclear Resistance Actions worldwide since 1980. Plowshares actions are taken from Isaiah 2:4, a book in the Hebrew Scriptures of the Bible, “God will judge between the nations and will settle disputes for many people. And they shall beat their swords into plowshares and their spears into pruning hooks. And nations will not take up swords against nations, nor will they train for war anymore.”