The puppet show in Libya has been set - here are the actors..

The puppet show in Libya has been set. Actually it was set before the Libyan revolutionaries revolted against Qaddafi. They (the people of Libya) will soon have to face the bitter truth when these puppets will negotiate in their name and will sell Oil to their masters.. 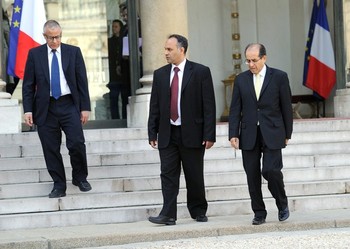 The interim Transitional Council members
The Council is composed of thirty one (31) members representing the various regions and cities of Libya. A number of these members have been named while the names of those representing Ajdabiya, Al Kufrah, Ghat, Nalut, Misratah, Az Zintan and Az Zawiya will not be declared for safety reasons. The Council is eagerly awaiting for the naming of representatives from Central and Southern Libya and Tripoli.

1. Counselor: Mustafa Mohammed Abdul Jalil as chairman of The Council.
2. Mr. Othman Suleiman El-Megyrahi (Batnan Area)
3. Mr. Ashour Hamed Bourashed (Darna City)
4. Dr. Abdelallah Moussa El-myehoub (Qouba Area)
5. Mr. Zubiar Ahmed El-Sharif (Representative of the political prisoners)
6. Mr. Ahmed Abduraba Al-Abaar (Benghazi City)
7. Mr.Dr. Fathi Mohamed Baja (Benghazi City)
8. Mr. Abdelhafed Abdelkader Ghoga (Benghazi City)
9. Mr Fathi Tirbil and Dr. Salwa Fawzi El-Deghali (Representative of youth and women)
It was also announced that Mr. Omar Al Hariri will be responsible for for military affairs in the council, and Mr. Mahmood Jibril and Ali Al Issawi as being responsible for foreign affairs and international liaison.
--------------------------------------
1. Mustafa Abdul Jalil Fudail
he was born in the city of Bayda, east Libya in 1952. He graduated from the department of Shari’a and Law in the Arabic Language and Islamic Studies faculty from The Libyan University in 1975. AbdulJalil was appinted assistant to the Secretary of the Public Prosecutor in the city of Al Bayda, then he was appointed a judge in 1978, then a consultant in 1996. In 2002, he was appointed President of the Court Applea, then President of the Court in Al Bayda before being picked as the Jusice minister in 2007 till February 2011. In January 2010 he attempted to resign on national television over the government's failure to release political prisoners. His resignation was rejected. He resigned on 15 February 2011 after seeing the violence used against protestors in Benghazi, being the first senior official to do so. On 24 February 2011 opposition politicians, former military officers, tribal leaders, academics and businessmen held a meeting in the eastern city of Al Bayda. The meeting was chaired by Abdul Jalil, who quit the government a few days before. The delegates stressed the importance of the national unity of Libya and stated that Tripoli is the capital city. They discussed proposals for interim administration with many delegates asking for UN intervention in Libya. Jalil was stated to be the head of the National Transitional Council in the Council's founding statement of 5 March 2011. He is considered a conservative and devout Muslim, not a radical Islamist. He can often be seen wearing a 'shanna,' the traditional burgundy coloured wool cap used by Libyan men. In classified US diplomatic cables leaked recently by the website Wikileaks, he is described as open and cooperative.

2. Mr Mahmood Jibril: (right in foto below)
Born in Libya n 1952, obtained a BSc in Economics and Political Science from Cairo University in 1975. Holds a masters’ degree in Political Science from the University of Pittsburgh, Pennsylvania in 1980. He also obtained a Doctorate in Strategic planning and decision-making from the same university in 1984 where he worked as a professor in the same subject field for several years. So far he has published 10 books in Strategic planning and decision making. He led the team who drafted and formed the Unified Arab Training manual. He was also responsible for organizing and administering the first two Training conferences in the Arab world in the years 1987 and 1988. He later took over the management and administration of many of the leaders’ training programs for senior management in Arab countries including Egypt, Saudi Arabia, Libya, UAE, Kuwait, Jordan, Bahrain, Morocco, Tunisia, Turkey and Britain
15 March 2011 - also Clinton meets Libyan opposition figure Mahmoud Jibril..

3. Mr. Ali Al Issawi ( Essawi) (center in Foto above)
A political and education Libyan who was born in the city of Benghazi in 1966. Has a PhD in pivatisation obtained from the Academy of Economic Studies in Bucharest Romania. He occupied the position of Minister of Economy, Trade and Investment in Libya, and was the youngest minister to fill such a post. Before taking the ministerial position, he founded the Centre for Export Development in 2006 and became the first Director General for it. He also assumed the position of Director General for the Ownership expansion program (privatization fund) in 2005. Ali Al Issawi, former ambassador to India and one of the first Libyan diplomats to have raised the banner of revolt against Muammar Gaddafi since 20th of February , is the rebels' choice to reach out to the world.

And .....
the wild card ** Ali Zeidan (left in the foto below) .. he is not member of the council ..he has not been appointed by anyone.. always present in the meeting with Sarkozy.

Ali Zeidan doesn't live in Libya he is based in Munich and he worked for oil company having business in Iraq. Ali Zeidan, a Europe-based envoy (appointed by who ?) for the Libyan National Transitional Council, and Mansour Sayfal-Naser, a member of the Libyan Human Rights League !!, speak to the Associated Press in Paris, Monday March, 21, 2011.
Zeidan said air strikes, led by France, Britain and the United States, have helped, but the council do not want international forces to invade the country. "Gaddafi must disappear. He should leave as soon as possible," Zeidan said. "We would like to establish a new state on the basis of democracy ... we do not want an Islamist government."