BRUSSELS - Trade union protests outside an EU summit in Brussels against the austerity being imposed across the continent by the bloc turned violent on Thursday (24 March), as riot police battled rock-wielding demonstrators with water cannon and pepper spray.

Because of a fear of violence, helicopters circled over the summit site, hundreds of police patrolled throughout the capital, and heavy equipment, including water cannons, was stationed close to EU headquarters. Demonstrators armed with sticks and other protesters throwing stones confronted police cordons but could not break through. 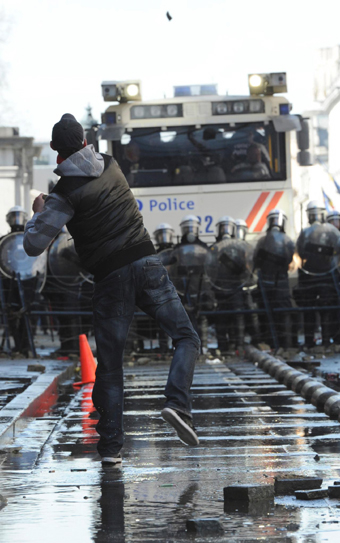 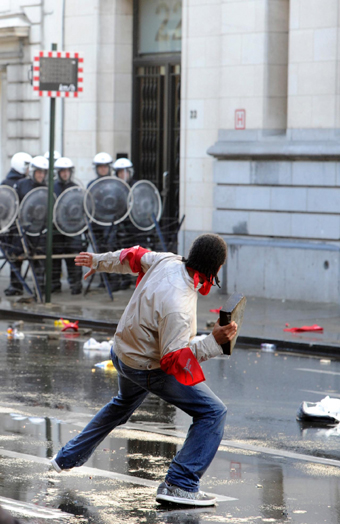 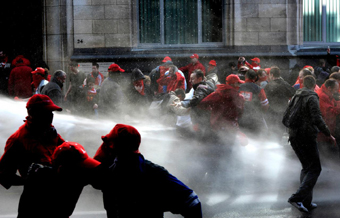 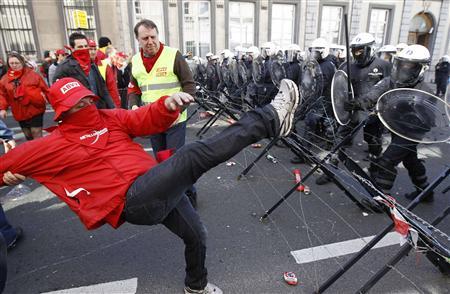 Four separate marches across the European capital comprising some 20,000 workers, according to organisers, converged on the meeting of European premiers and presidents.

20,000 workers marched against an economic reform package unions say is far too business-friendly, chanting, blowing whistles and blocking key roads in central Brussels. The protest cause traffic gridlock in the part of the Belgian capital that houses EU institutions. A dozen police officers were injured in scuffles.

The unions are protesting the imposition of the deepest level of economic integration in the EU's history - the delivery of 'economic governance' in the union that will require wage restraint, hikes in retirement ages, public sector cutbacks and limits on government spending, amongst other stringent measures.

"This happens while bankers and CEOs are continuing to receive huge and scandalous bonuses and pay and very little has been done to remove what really causes the crisis," ETUC said in a statement.

"The European trade union movement stands clearly against these policies and states that this is not only unfair because the burden is carried only by the ones who are not responsible for the crisis, but also wrong from a economic and strategic point of view."

Giant banners demanding: "Competitiveness Pact: No. Austerity Pact: No. Solidarity Pact: Yes" were draped by campaigners covering the centre of the roundabout at the top of the European quarter.

The violence kicked off after a few dozen red-dressed members of the Belgian socialist trade union, the General Federation of Belgian Workers (FGTB) attempted to break through police barricades and threw objects at the police.

The protest came after a group of demonstrators invaded an event in the European Parliament on Wednesday evening where the Greek culture minister was speaking.

Unveiling a banner denouncing the European Union and the International Monetary Fund during a celebration in Brussels of the 2500th anniversary of the Battle of Marathon, when Athenians managed to resist an attack by the Persian Empire, the protestors described the EU and IMF as an "occupation force" akin to the "barbarians" that fought the Greeks two and half millennia ago.

While organisers were not pleased with the interruption, the protesters received applause from many of those in the largely Greek audience in the packed EU parliament chamber.

In the last week, protestors have organised flash-mob-type actions when Greek ministers have appeared in public in different countries, including interrupting a speech by Prime Minister George Papandreou at Humboldt University in Berlin and an event in Paris attended by deputy premier Theodoros Pagalos.

On Wednesday, the Greek minister of labour, Louka Kasteli, was confronted by a group of angry unemployed workers who shouted him down and took over a press conference in the region of Macedonia. Similar protests trailed visits by Papandreou to the island of Syros last week while Pagalos was also found himself trapped in a taverna for two hours in the town of Kalyvia as a crowd of 500 furious locals hurled insults and yogurt at the MP.

Aris Chatzistefanou a reporter with Skai media group in Greece told EUobserver the anger in the country is boiling over even amongst regular citizens: "Not a single person from each of the main two parties can walk through the centre of Athens without being assaulted."

"MPs have stopped going to restaurants they used to go to. Not just because they are worried they will be shouted at or attacked. The restaurant owners are telling them not to come because it's bad for business."