The London Guantánamo Campaign [1] is concerned about the involvement in the upcoming UK-wide Census of two private companies that were contracted to carry out coercive prisoner interrogations at the notorious US military detention facilities at Guantánamo Bay and Abu Ghraib, Iraq. [2] 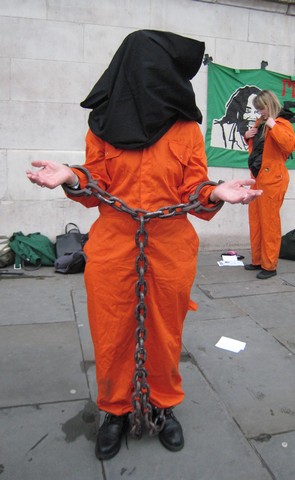 The latest ten-yearly Census will take place this weekend (27 March). It has drawn criticism from a range of peace and civil liberties campaigners opposed to the involvement of US-based military and intelligence agency contractors Lockheed Martin - one of the world’s largest military equipment manufacturers - and CACI - implicated in human rights abuses at Abu Ghraib. Concerns have also been expressed about the intrusiveness of the questions and issues of data confidentiality. [3]

“Members of the public with valid concerns about excessive state intrusion into their personal lives, or who may feel under particular suspicion by virtue of their ethnic, religious or political background, will be wary of completing the Census. The involvement of two private companies associated with coercive interrogations and other intelligence gathering on behalf of the US authorities will do nothing to allay those concerns, and will understandably result in many individuals choosing not to co-operate.”

2. The UK subsidiary of Lockheed Martin, headquartered in Bethesda, Maryland, USA was awarded a £150M contract to provide data capture and processing support services for the 2011 Census in England and Wales, and Northern Ireland.

The UK subsidiary of CACI, headquartered in Arlington, Virginia, USA, was awarded an £18.5M contract to provide census printing and data capture services in support of the 2011 Census in Scotland.

3. Further information on campaigns around the 2011 Census:

Lockheed Martin and the England and Wales, and Northern Ireland Census:

CACI and the Scotland Census: