During the day the police strategy seemed to be about dispersal and blocking rather than containment, this changed at night with dispersal and containment being used particularly around larger areas like Trafalger Sq. 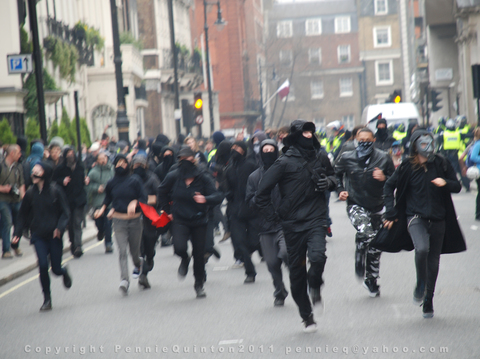 Keepin' on the move.

There was a lot of talk before yesterday about the police using new public order tactics for the demo. Which they certainly did do on the day. But what do people think? We had the usual police tactic of reacting to protesters getting “active” on the streets by forming lines and charging in – BUT we definitely didn't see the same old kettling that we have become uncomfortably used to.

During the day the police strategy seemed to be about dispersal and blocking rather than containment, this changed at night with dispersal and containment being used particularly around larger areas like Trafalger Sq.

With the Fortnum & Mason occupation succeeding after 1530 there was a lot happening between green park and Piccadilly Circus (actions on banks and police-protester “engagement”). After 1630 with protesters getting onto the F & M front canopy police tried to push protesters back to stop them doing so. It took some time but they did this and then began forming lines (up to 3 times or so) toward Piccadilly Circus. This is when it seemed like they were going to kettle. BUT the police lines were either finished with or the coppers still allowed pedestrians through – so no kettle. The police were particularly brutal here often breaking out of line by a few meters indiscriminately truncheoning like mad.

Something particularly worth talking about is the Police “Hive” unit that was a tight-knit circular unit that literally ping-ponged in an incredibly violent way through the demonstration in the direction of Piccadilly Circus. Police seeing red would just charge in unusually random directions throwing protesters against railings and viciously lashing out with truncheon or shield. It was an unexpected tactic and when it seemed like they would surely retreat out from amongst the demonstrators back to one of their lines they would again charge in a new direction.

(The last hundred or so coming out of F & M were contained and arrested, some are still in the stations at the time of writing.)

Protesters and blocs came and went but it wasn't until after 2130 that the police really started to kettle those they we're able to divide and disperse. Nevertheless there were still protesters around after midnight with quite a lot of fighting going on in the surrounding streets.

Around the West End

Police would again attack and disperse any protesters they found doing actions across the streets or oxford circus etc. There was a lot of “cops and robbers” style chasing of the black bloc and others. During the day the “sit-downs” in Oxford Circus were harassed, but weren't kettled. The day was definitely generally marked by a lot of movement by autonomous groups taking to the streets. With a number of reports of de-arrests, even out of police vans!!

Of course there was no change in the use of heavy surveillance, whether FIT teams, roof top photography and undercovers – they were all in action. This was obviously put in effect by snatch squads, who targeted individuals for arrest.

So what do people think about these changes in police strategy? Dispersal meant protesters and blocs still remained mobile on the streets. But the violence of the police for example the “hive” unit had its own effect. Whether unnerving protesters or creating chaos. Though chaos is definitely something that demonstrators have been able to take advantage of in the past, seeing as police coordination relies on accurate information that they can react to – chaos is not manageable! Plus as the police admitted themselves they were not able to protect all of the west ends businesses.

With most of the kettles being shorter and occurring at night perhaps the police are reacting to the bad-press kettling has been receiving? Anyway thought I'd just write this, not that I'm really directly saying much, but I still thought I could get this out there – would be interesting to hear your comments (or corrections as you see it!)