Forget what the mainstream media are saying about the black block, the most serious violence yesterday was probably the attack by police on partying crowd that was gathered in Trafalgar square. 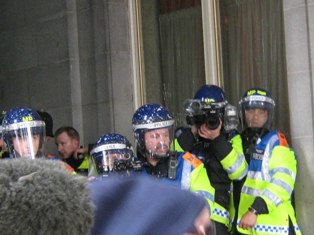 Senior police officers had warned in the run up to the March 26 protests that any occupation of Trafalgar square would be dealt with ‘robustly’. There were true to their word. The party taking place there hadn’t been violent, and taking part in it was not unlawful. But that didn’t stop the police from wading in with batons and boots flying, sparking further confrontations that went on into the night. The police justified their actions because of alleged damage to the Olympic clock, but a prior statement by Asst Commissioner Lynne Owens that an occupation would not be tolerated suggests that this was a pre-planned operation.

It seemed to some of those that were there that some police officers were after vengeance for things that had taken place earlier in the day. The police were noticeably hyped up and frustrated by black block activists who had outsmarted and outmanoeuvred them all afternoon, and this may well have added to their aggression in Trafalgar Square.

Unlike the police though, the black block didn’t make the public a target of their anger. In fact the block were disciplined and focused, attacking only the property of banks, tax-avoiders and symbols of the mega-rich. Media outlets like the Mail and Telegraph will froth at the mouth, and the TUC will cough and splutter, but the truth is that a lot of people will watch the footage of smashed windows at HSBC and Santander and think, ‘they had it coming’.

Overall the police have arrested around 200 people, a large proportion of which were from the non-violent occupation of Fortnum and Masons. As with previous demonstrations, many of these arrests appear more motivated by a desire to gain intelligence – names, addresses and photographs – than by a need to prosecute for so-called criminality.

The FIT noticeably had a bad day. The black block kept them at bay with paint bombs and fireworks, and they were stopped from moving through crowds by protesters who linked arms in front of them. Even from the very beginning they were ‘flashmobbed’ by people on feeder marches, and stopped from picking up their much desired ‘intelligence’.

What is needed now is some solidarity, and a determination not to separate ‘good’ protester from ‘bad’. Nobody at any of the demonstrations was, as Met Commander Bob Broadbent claimed, “engaging in criminal activities for their own ends”. Certainly not by holding a party.