Our M26 "No Cuts Day" started pretty well. We have a lot of "Free Bradley Manning" visuals left over from the U..S embassy gig last week & have them stored (if ya need to borrow them?) at our Bradley Manning shrine/ art installation at Giuseppe Conlon House (GCH). It displays and desciribes Brad's present prison conditions and daily routine, always could be improved if there's anyone out there is artistically inclined?
HEALTH WARNING THIS IS GONZO JOURNALISM

I hoofed up to the tube with agnostic G who had crashed at GCH. We got on the tube and an American feminist sat down next to us who works for Caged Prisoners

http://www.cageprisoners.com/ How random is that? Living near NYC she had heard of Catholic Worker, gave her a flyer on Bradley Manning and Gareth Perice speaking at the event at GCH on April 17th. and tried to recruit her for our weekly anarcho refugee football game on Saturday morinings in Funsbury Park.
Flyer Side 1

Got off tube and set up on steps of Martin-in-the-Fields, there was a memorial lecture about to start inside for assasinated Salvadoran Bishop Romero on the social gospel, so I knew some of the folks headng in and gave them Manning flyers. Did a repetitive short rap on Manning while passivley offering flyers - so folks passing by had to proactively reach out and take them. Didn't want flyers discarded. We weren't going to be the only show in town and folks who've been on these big marches have understandably/unfortunately developed an aversion to taking literature. The chugger (charity mugger) plague doesn't help lots of folks think ya trying to sign them up and take their life savigs! Like many other marginalised campaigns we know a good target audience when we see one! Peace News folks rolled up. We split up and I headed down to Whitehall to set up a visual for Manning where the march would be passing,

LCW Henrietta soon joined me. As we were etablishing our presence, a guy with a mike approached me and said "Where are you from?" The guy behind him produced a camera and started filming.
I reponded, "Is this an interview?"
He nodded and the other guy kept filming.
I had the sense he was trying to cah me out.
"Uh, Harringey!"
He smiled. "What are you doing here? This is not an anti-war march?"
I said "The government is spending money on wars they could be spending on meeting human needs etc. Manning is facing life in prison or execution for exposing their war crimes in Iraq etc etc...."
When he finished, I said, "Where are you from?"
"Channel 4!"
"Rightio, ya tried to catch me out there, better luck nex time!"

We set up 10 metres in front of a guy dressed in a hi vis jacket with "senior steward" on the back who was directing folks to take a left hand turn as they approached Trafalgar Square. Not sure what the junior stewards were doing, something more menial I assume?

I started a repetitive rap as people passed,
"This, and the previous government, would rather go to other people countries
and detroy their schools and hospitals rather fund schools and hospitals here!
Bradley Manning was only 14, living in Wales, when this war started,
He faces spending a life time in jail for exposing their war crimes in Iraq.
Bradley needs to be hearing from us NOW!"....google him, send him a postcard"

Some of the MiliBrand supporters weren't impressed, but we experienced no aggro from the rank and file. We stuck up some images of Bradley on a red phone box....declared it a Bradley Manning Embassy and kept flyering. An SWP paper seller positioned himself next to us roaring out "Who will buy..." chorus, adopted from Oliver but without the sweet tones.

These cultist clowns have tried drowning me out at many other events (but they usually deploy a wo/man with a megaphone)...he fkd off eventually. I think they are a bit short staffed these daze after their RESPECT split and there StWC/COUNTERFIRE expulsions. So many movements/ popular fronts to screw up on behalf of the state, so little time/membership!

We experienced no aggro from the rank and file......some folks familiar with the Manning case were deeply moved to see us to see someone somewhere doing some for Bradley. Some got emtional. One guy thrust 25 quid into my hands (65 quid to go to break even on the 5,000 flyers we've produced..and I only thought such spontaneous philantrhopy existed in America!)

Others applauded us and many reached out to take a flyer (we were to run out of our 1500 flyers from folks proactivey reaching out for one.) All was dandy until the "senior steward" made his move. For no reason (maybe it was a directive from the Central Committee meeting in emergency session?, maybe it was his own authoritairan impulses?, maybe he's just an asshole? who knows? who cares?) , he walked 10 metres in front of us (20 metres from where he was positioned) to steer the march away from us and our phone box installation.

I went up to him and said "Are you trying to censor us?" He would not answer. (Must have thought I was an anglo and wouldn't make a scene, like Bob Crowe and Caroline Lucas banned from the Hyde Park platform sacrificed to the MilibRand? Maybe because we're christians, he assumes we are soft targets? BIG MISTAKE!) I got in his face, hands behind my back and said "Are you a Trot or a a Labor Party hack? He would not make eye contact. I demanded "Make eye contact and return to where you were postioned?" He would not make eye contact and kept trying to direct folks away from us and the Manning display. I asked him "If he was hoping to screw up this movement as they have screwed the anti-war movement?" (taking numbers down from 2 million on the streets to 5,000 /13 MP's voted for continuing to fund the wars last week, down from 18 who voted against it last time...if this was the private sector these paid bureaucrats would have been sacked long ago! Wouldn't they?

He tried to call in back up. I dealt with his radio. Back up came (more "senior steward" vests, still no sign of the "junior stewards"?). They must have a thing when they lose radio contact they come a running, we use to have one of those in a homeless wet shelter I worked in Dublin! The back up didn't engage me and eventually got him to retreat to his original position. Back in his box, Small victory for the libertarian movement to go with all our glorious defeats!

We eventually ran out of flyers. An Irish anarchist punk mate had passed by earlier heading up to the Uncut thang so we headed across Trafalger Square up toward Oxford Circus. But like the Aussie troops at Kahartoum, we turned up late and the anarchos heading back our way had been given different coloured cards. It was June 19 (or was it 18/) 1999 pre-Seattle all over again!

Heniretta had to go. LCW Martin was up at Hyde Park with flyers, but had enough of MiliBRand adulation he had ro split. Our local parish priest was in Hyde Park took a bunch of Manning flyers for his flock, He recently went to Turkey to accompany 150 banged up Kurds being railroaded at a court scene. And he once told his BAE parishoners, at a previous parish, not to put money on the plate because parish didn't want blood money. Might explain his transfer to our parish? He's the best thing to come out of Tipperary since Shane MacGowan and Martin Sheen sprung from Borrisokane!

Anyways I just wandered around the scene displaying my Brad Manning visuals as the anarcho kidz took Fortnum and Mason.
vid

Eventually I climbed up and hung off a "Walk/ Don't Walk" sign to get a better a view of proceedings and display the Manning poster. A Belfast guy climbed up next to me. He had done a lot of serious rioting in his youth and was able to give me a running commentary on police tactics, the strengths and weakness of the masked up anarchs doing their thing. It was like having an ex pro footballer commentating on a match and I could ask him questions of clarification. Some of what was happening was visually inspiring, some counterproductive. I didn't see any serious violence from the anarchs, there were about 1,000 of us there.

My main problem with the blac block in the past, is that they end up conscripting folks not prepared for, dressed for, in agreement with, into a street battle. But this wasn't the case here, those who were happy to be part of the Labor Party led/ SWP serviced cattle drive to Hyde Park from A to B had gone. Those of us there as active participants or curious obsevers (like me) chose to be there. I respect the courage, the sense of community and creativity of blac block.

Not sure how good Blac Block are on looking after their casualties, prisoners and wounded? They are ambigious on violence, rules of engagement (what are their limits on violence and force dunno?...3 bank workers burnt to death in Greece, fire is uncontrolable!, in Brighton there was a report of a dart being thrown is that ok? I've seen their friendly fire casuaties in the past, is their a confusion there between the sound of breaking glass and rrrrrrrevolution...the fog of (the class) war is it???

But the Blac Block kidz are relatively harmelss compared to the British Labor Party that killed 1 million Iraqis (Lancett Report) while in power. Yup that be the same Labor Party controlling Saturday's A to B cattle drive to Hyde Park in the hope of a great photo op for their leader MilibRand. The same ones that airbrushed, muscled off the stage, Bob Crowe of the Transport Union and Caroline Lucas Gree Party MP. But they couldn't airbrush and muscle off these kidz.

Eventually the riot police got their act together, my Irish anarch punk mate turned up and led me down an alley and we got the tube back to Giusepe Conlon for further analysis and a few beers. 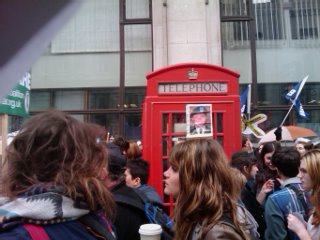 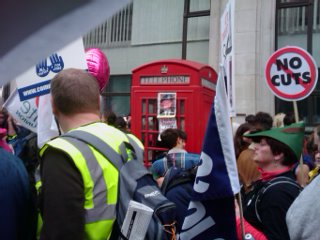 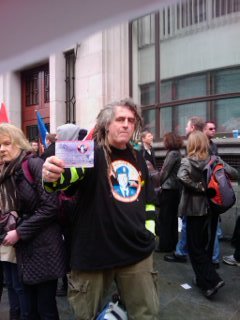