What Now After The TUC's London Demo?

Saturday brought the largest expression of class anger Britain has seen since the Poll Tax, as hundreds of thousands marched through London on the Trades Union Congress-organised march against the government's massive cuts. A significant number also took direct action, showing that they trust neither the TUC nor the Labour Party to fight back against the super-rich on their behalf. 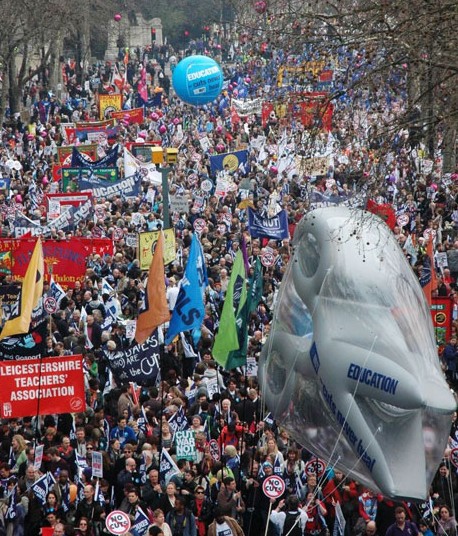 In the words of Percy Shelley, "Ye are many, they are few"

The crowd outside occupied Fortum & Masons 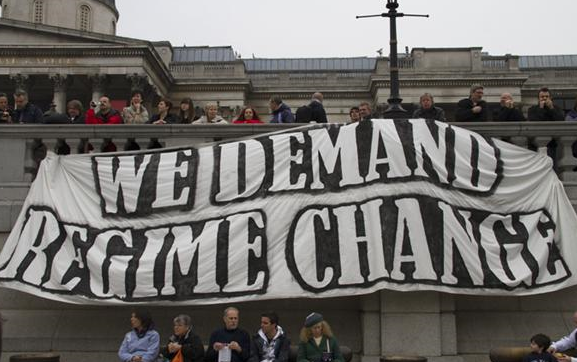 The day began with a huge march from Embankment, past Parliament, to Hyde Park, where Labour leader Ed Miliband was to address (and get booed by) the crowd. Due to the density of the march, the three mile journey took three hours to complete. Despite this, the TUC's 'estimate' of 250,000 marchers was even less than that of the police, while some participants have guesstimated there were about a million protesters present. If that is the case, then it was in the same league as the biggest march against the Iraq war, which had received overwhelmingly more media promotionover the preceding weeks. Significantly, the TUC had limited their call-out to public sector workers, around a tenth of the population.

As the march unfolded, so did the ruling class propaganda. Politicians and pundits on all channels portrayed the marchers as 'deficit deniers', who represented a small minority of the population (they actually represented a majority). Then there was the minority of that 'minority' - those taking direct action. Police chiefs, union bosses and Sky News all agreed that they were merely "criminals who have nothing to do with the real message, hijacking a peaceful protest". Yes, we were being asked to believe that people occupying shops owned by tax evaders weren't actually against the cuts at all - they just enjoyed chaos. Of course, this was the truth turned upside-down.

Many excellent accounts of the direct action have already been written. Phil Dickens has blogged on the manoueuvers of the Radical Workers Bloc. Laurie Penny has described the occupation of posh department store Fortnum & Masons (which ended in police dirty tricks and a mass arrest). Auntie Farr, 1st Casualty and Fitwatch have described the 'Battle of Trafalgar Square', where police kettled and ferociously attacked a street party inspired by the Tahrir Square revolutionaries of Cairo. For those looking to cut through the media fog, all these eyewitness accounts are well worth reading.

But what now, as the dust settles, the shattered glass is replaced and the criminal charges are processed? If a new workers' movement is to emerge over the coming months, it must completely reject the position of Miliband and the TUC, which is that "There is a need for difficult choices, and some cuts."

In opposition to this, we must fight every single cut. Against the lie that the bankers create wealth, we must openly declare that it is working people who create all wealth. After the 'March For The Alternative' failed to propose an alternative, we must do so: it is the wealth of the elites which must be confiscated, and put to more productive common use. In the midst of struggle, we must declare solidarity with all those opposing the capitalist system, and put forward a vision of a new, equal, and truly democratic society.