Yesterday Shell were blocked from transporting materials being used to build their new tunnelling compound at Aughoose. 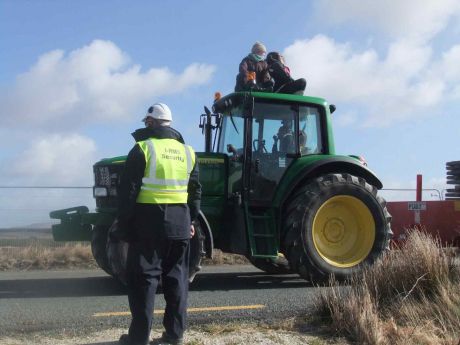 Campaigners at Rossport Solidarity Camp blocked three tractors drawing large trailers of wooden bog mats needed to create a surface for excavation of peat. Tractors were stopped by standing in the road, and then climbing on top of the tractor cabs preventing them from moving. Three people climbed onto the roof of one tractor directly in front of the compound entrance, forcing transport to stop for four hours. Gardai did not have equipment to safely remove the campaigners. Two people involved were arrested following the tractor stoppages along another road section nearby. The arrests took place shortly after the protest and while campaigners were following the direction of Gardai and walking peacefully back towards the camp. They were held for one hour at Belmullet Garda station and released without charges.

Yesterday Gardai also returned equipment which they had taken from campaigners without warning during an action the previous day. The equipment stolen included a couch, pallets, duvets and pillows and a DC lighting system. All of the equipment had been damaged by the Gardai by being dumped out of a van, smashed or broken in some cases, and then left overnight in the rain. Parts of the lighting system were missing.
Related Link: