Over 20 protesters said no to fur in Cambridge leading to police making 3 unlawful arrests of activists. 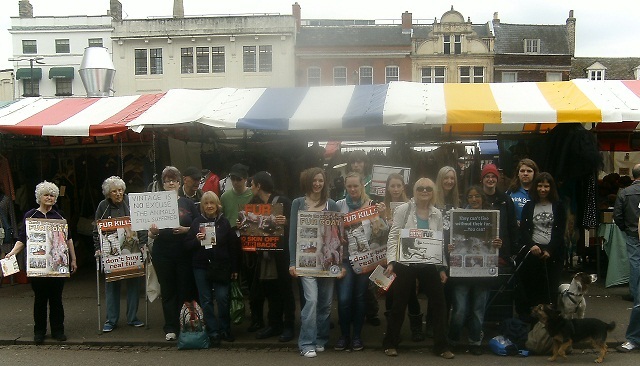 Yesterday (Saturday 2nd April 2011) over 20 protesters held a protest outside Dixies Vintage market stall who are believed to be the last seller of real fur in Cambridge. Once again petition sheets were quickly filled and leaflets where handed out.

Protesters chanted ‘Fur Trade, Death Trade’. Activists spoke about the cruelty inherent in the fur industry letting the public know that animals are often gassed, electrocuted or even skinned alive.

PCSOs watched the demo for some time, then police where called. One police officer told the protesters they could be breaching Section 5 of the Harassment Act. There is no such act! The Protection from Harassment Act does however exist and Section 5 relates to Restraining Orders which are placed after conviction - so was completely irrelevant!

Later 3 protesters where arrested for alleged Breach of a Section 14 Order that the police claimed they issued at the protest. As the 3 have all been charged little can be said about this apart from we believe them to be unlawful arrests!

The last time Cambridgeshire Police arrested members of Animal Rights Cambridge under Section 14 was in 2009 at Zippos Circus and that ended with the force paying out thousands in compensation to activists!

The activists will not be intimidated and protesters will be back until Dixies market stall goes fur free once and for all!