PC Simon Harwood, the police officer who pushed Ian Tomlinson to the ground at the G20 protests two years ago, gives his second day of evidence at the newspaper seller's inquest 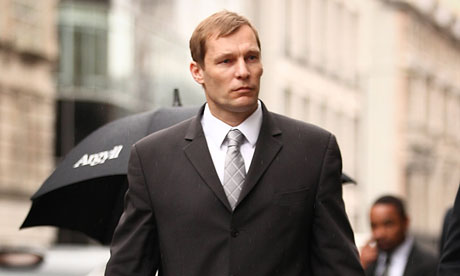 Harwood said he came from behind police dog handlers to use force against Tomlinson because he thought doing so was "proportionate" given that Tomlinson was not moving away from a police line:

The baton strike, in the area that I struck Mr Tomlinson, is more to cause a reaction from an individual, rather than to hurt, so they will hopefully move away from the line they are being asked to move away from.

Asked whether he gave any verbal command to Tomlinson to move away, Harwood said: "I can't recall."

12.22pm: Asked whether Tomlinson posed a threat, Harwood replied: "Not to me, no."

Asked whether he posed a threat to anyone else, Harwood replied: "No, I don't believe he did, no."

The Guardian obtained this footage of Ian Tomlinson at a G20 protest in London, shortly before he died. It shows Tomlinson, who was not part of the demonstration, being struck from behind and pushed to the ground by baton-wielding police Link to this video