A protest today by the Rossport Solidarity Camp members at the Shell compound in Aughoose resulted IRMS security assisting the Gardaí in detaining campaigners. 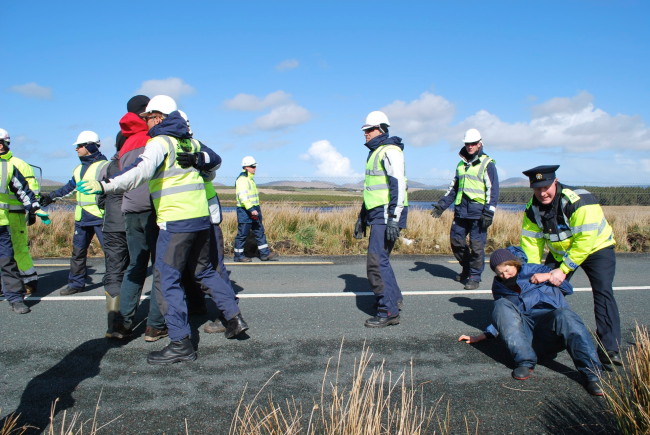 Gardaí and IRMS work together to stop protesters

At about 4pm today, campers who had been working on setting up a structure at the camp in Aughoose, Co. Mayo, Ireland ran to stand in front of a Shell tractor carrying machinery. A Garda van had been waiting up the road for most of the day, and arrived on the scene within one minute. Protesters locked arms while standing in the road to block the tractor, but were carried away – or dragged – by Gardaí. One man was carried away and dumped in the water-filled ditch beside the road. At least 2 protesters were dragged off the road by just one arm. After being taken away a first time, campaigners continued to attempt to circumvent the line of Gardaí in order to gain access to the tractor.

After 5 minutes, between 10 and 15 IRMS guards (Shell’s private security company) came out of the Aughoose compound to assist the Gardaí in blocking protesters on the public road. IRMS guards dragged one campaigner away from the compound gates, and formed a cordon along the road to block access to the tractor. Protesters continued attempts to reach the tractor and machinery, but were forcefully held back by both the Gardaí and IRMS forces. After 20 minutes, campers left the road and returned to work on the Aughoose camp.

Protests and interventions will continue every day from now on, come up & support!

The Rossport Solidarity Camp is set up with sleeping spaces and we currently need people to come and help complete the camp. We are holding a camp work session this coming weekend. This will involve putting up our main marquee and building bridges. Please feel free to come and share your skills or learn new ones.