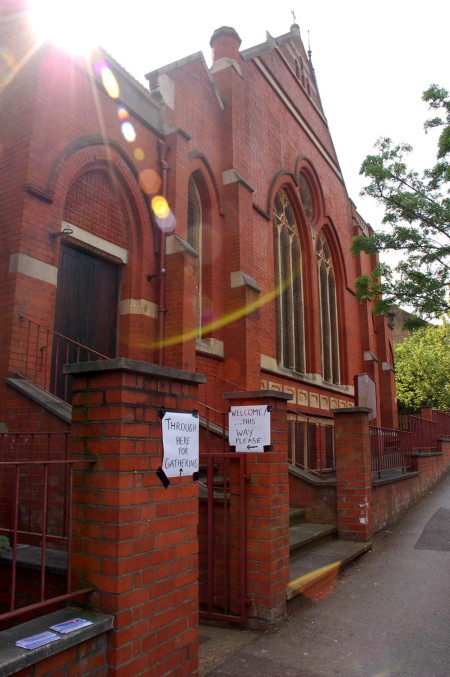 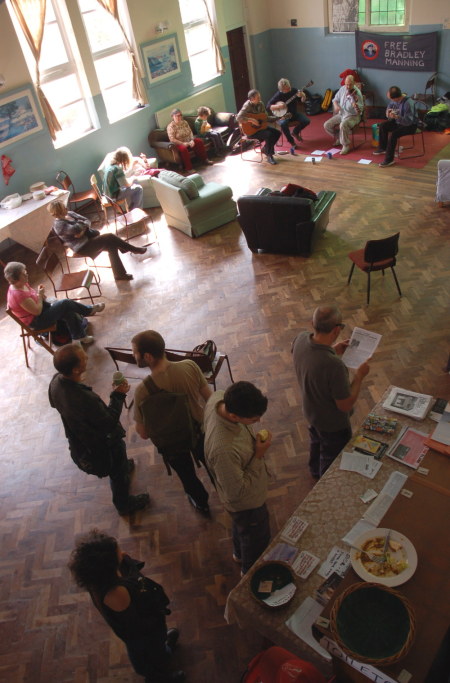 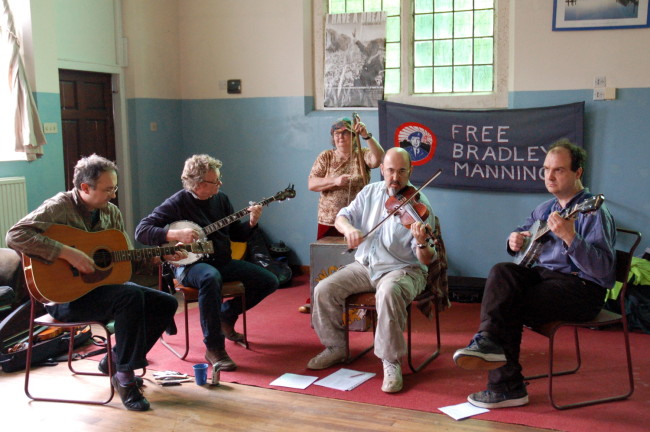 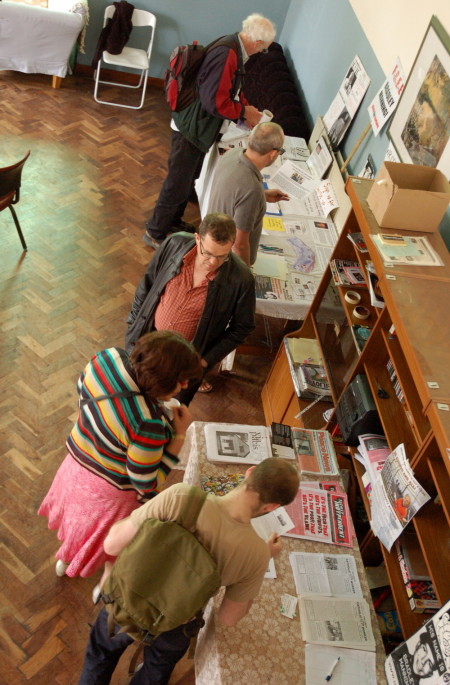 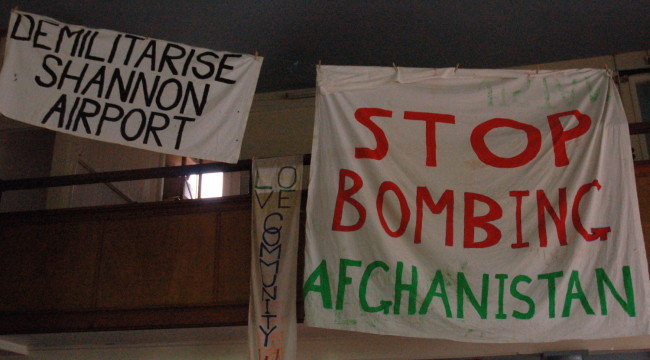 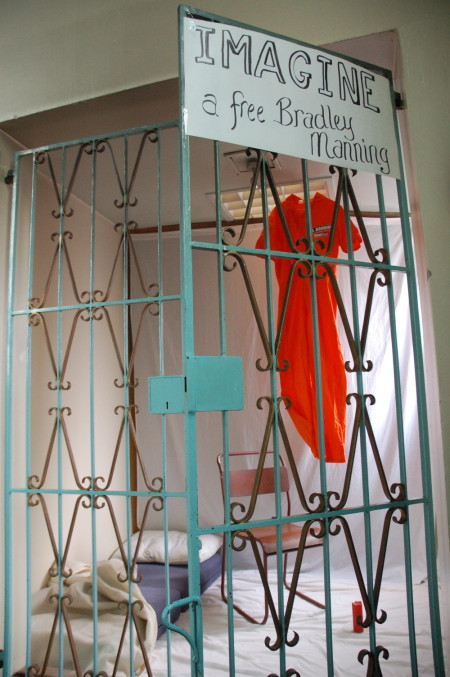 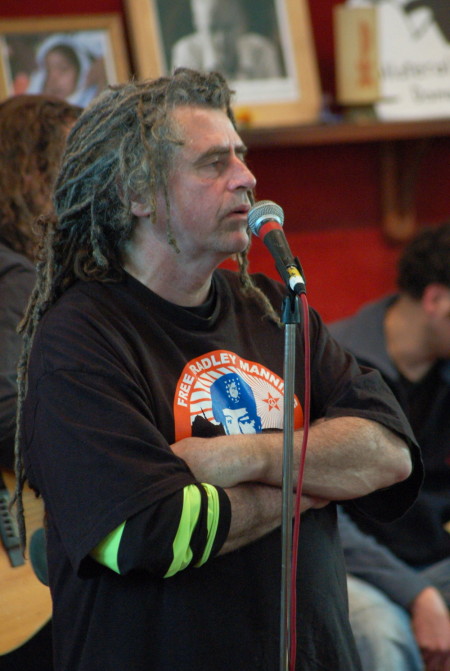 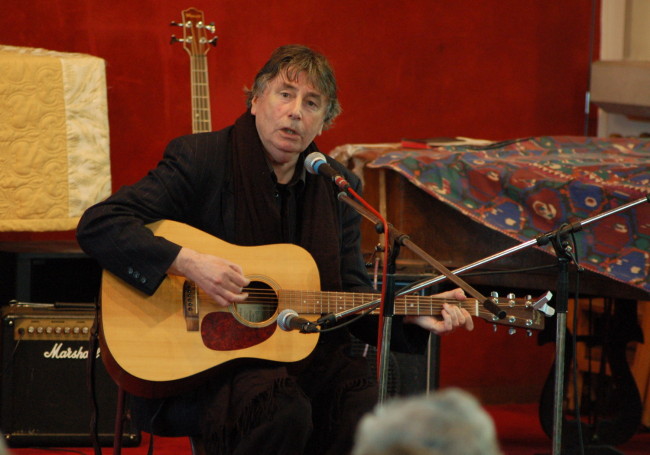 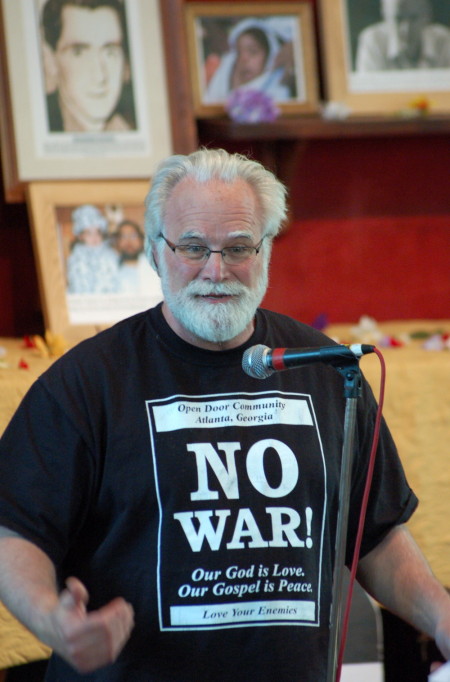 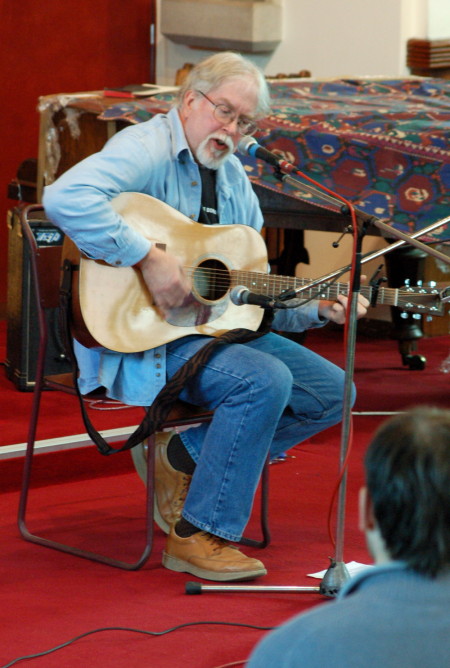 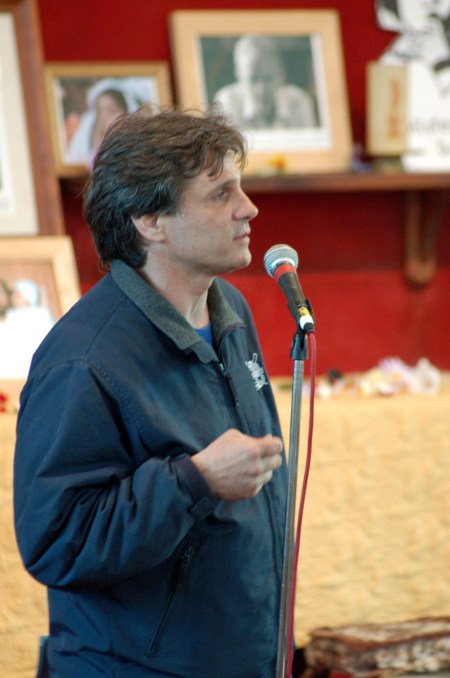 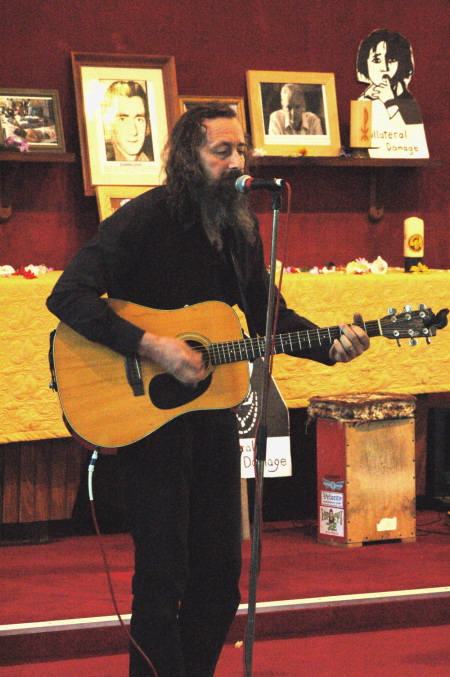 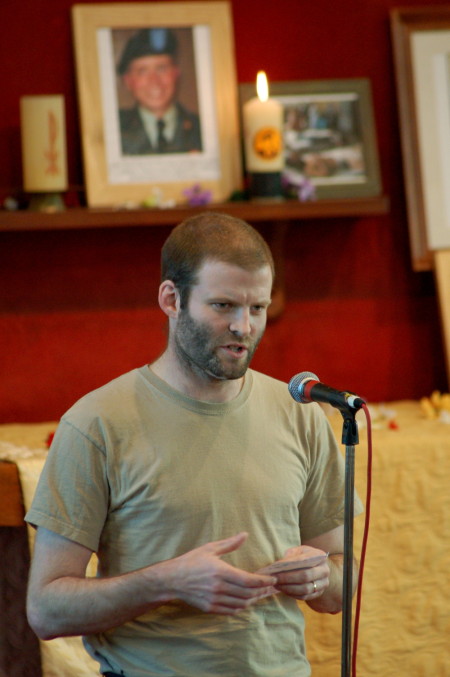 The event, held at Giuseppe Conlon House in Harringay, north London, kicked off at 2pm with information stalls and refreshments, space and time to network with others and music from the Bow Creek Ramblers Old Time String Band. People were also invited to sign a card from the gathering or write an individual letter of solidarity and support to Bradley Manning. A shrine representing Bradley Manning’s cell was also set up in the front porch of the venue, which was previously a Roman Catholic church. Imagine a free Bradley Manning…

Joe Black and 'The Welcome'

At 3pm, everyone moved into the main Giuseppe Conlon venue space (the old church) to start the meeting proper which was MC'd by London Catholic Worker Ciaron O'Reilly, who shares Irish roots with Bradley Manning, Australian roots with Julian Assange, and who has first hand experience of prisons in the US and elsewhere. Irish musician Joe Black, who had travelled from Dublin specially for the event, began by singing his song 'The Welcome', which deals with instances of hostility, racism and oppression across the globe, as experienced by members of the Irish diaspora and so many others.

Ciaron outlined calls being made in Ireland to have Bradley Manning declared an honorary Irish citizen and be offered sanctuary in Ireland, as well as to demilitarise the airport at Shannon, through which Bradley Manning and so many other US soldiers have passed on their way to fight in Iraq and Afghanistan. Ireland is a supposedly neutral state, but continues to support America's imperial wars by allowing the use of its airport for this purpose, knowing full well that the young men passing through will be put in harm's way and are likely to return to the US damaged or dead. In Bradley Manning's case, he has returned in chains.

Welcome in many languages

As Joe finished singing, people with first languages other than English came up to the microphone to give 'welcome' greetings in their own languages. These included individuals from Malaysia, the Netherlands, Mauritius, Ireland, Belgium, Czech Republic, Brazil, New Zealand and Australia, and a Buddhist monk and nun who delivered a welcoming 'Om' to all present.

Unfortunately, guest speaker Gareth Peirce was unable to attend due to a bereavement, but she recorded an address on video which was shown at the meeting. Gareth is a human rights lawyer who specialises in challenging miscarriages of justice and who has represented the Maguire Seven (including Giuseppe Conlon), the Guildford Four (including Giuseppe Conlon's son Gerry), the Birmingham Six, Guantanamo inmates, anti-war activists and many others. Gareth's address made it clear than Bradley Manning's treatment during his imprisonment by the US pre-trial is not exceptional - shockingly, it is becoming more and more common. An incredibly high proportion of US defendants (my recollection is that she said somewhere in the region of 97 or 98%) plead guilty as part of a plea bargain to get lesser charges or sentences. Pleading 'not guilty' is liable to result in indeterminate sentences with long periods of solitary confinement which have been shown to cause physical as well as psychological damage to the unfortunate victims of such treatment. Gareth pointed out that this abuse is not confined to the US and that Gerry Conlon, for example, wrongly convicted of the Guildford bombings, was held largely in solitary confinement and tortured for years in British jails because he maintained his innocence. The European Courts of Justice are currently considering whether the rights afforded to prisoners in Europe under Article 3 of the European Convention on Human Rights prohibiting torture are met for European prisoners held in the US who are protected by the Eighth Amendment, which includes the right not to be subjected to 'cruel and unusual punishments' but not apparently the right of association with other prisoners.

The next speaker, Catholic Worker Frank Cordaro, has spent four years in US prisons in stretches of up to six months at a time for anti-war actions, including such heinous crimes as stepping over a line on the ground at the Offutt AFB at Omaha, Nebraska, the nuclear and military space asset command centre (STRATCOM - you can download a helpful illustrated explanation from here: http://www.fas.org/sgp/crs/nuke/RL33408.pdf

Frank confirmed that there has been a deterioration in the way people are treated in US jails over the last three decades. In spite of a campaign against prisoners being held for long periods in solitary confinement, this was held to be legal, with the upshot that the practice has become widespread across the US, with even county jails now having facilities to hold inmates in solitary. Steve Jacobs, another long-time Catholic Worker from the US, followed this up aptly with a song about crossing the line and another: 'I ain't gonna work in Kansas City's nuke plant no more' (because war is good for the economy the same way that cannibalism is nutritious!) The third US visitor at the meeting, Catholic Worker Carmen Trotta, who was on the roof of the War Resisters League offices close to the World Trade Centre on 9/11 and witnessed the collapse of the second tower, spoke about all the peace signs placed alongside the names of people who died in the attack, sending the clear message: 'Don't make this an excuse for a war'. Carmen also referred to continuing protests against the existence of Guantanamo Bay, still open after Barack Obama promised it would be closed. He called for solidarity with Bradley Manning, solidarity with prisoners generally and with those still held in Guantanamo Bay, as well as greater international cooperation than we have ever had before on all the issues that face the planet and its people.

While the next musical act - New Zealand Blues singer and guitarist, John McLean and his band - was setting up, Ciaron talked about the conditions Bradley Manning is being held under and the torture he is being subjected to, techniques developed at Long Kesh in Northern Ireland and refined in Abu Ghraib and Guantanamo Bay. He also spoke about the link between Julian Assange and Bradley Manning, and the efforts that are being made in the US to pressurise Manning into doing a deal which will incriminate Assange, leading to his extradition via Sweden to the US.

John McLean's set was followed by another from Joe Black, after which Ben Griffin, a former member of the SAS/Iraq war veteran (first tour of duty) and war refuser (second tour of duty) spoke about Bradley Manning and his alleged 'crime' of exposing the true nature of the state and shining a light on the things the state tries to cover up. If Bradley Manning is guilty of such a 'crime', then so is Julian Assange along with all the newspapers which reported the leaked material, and so are we for reading about it. However, while we get off scot-free, Manning is being subjected to torture, sending a deliberate message from the state to other soldiers not to speak out. If Manning is convicted, says Ben, it will be a victory for state secrecy and brutality. We need to be campaigning for his release, building solidarity with Manning in order that other soldiers in future will be encouraged to follow his path. His whistle-blowing should not be seen as an act of treason but as normal, something that any soldier, faced with illegality and criminal behaviour, would do.

Solidarity with Manning and Assange

Carmen Trotta closed the musical section of the main event with an Elvis number; then Ciaron O'Reilly closed the formal proceedings with the usual rounds of thanks and a summary of Julian Assange's situation, facing a lifetime in jail or quite possibly being killed while in custody. However, the liberal left as represented by the Guardian newspaper are portraying Assange as a playboy in a mansion in Norfolk while all our sympathies are invited to go to Bradley Manning, being tortured in jail in the US. A solidarity campaign needs to rise above such bias. Ciaron spoke about the environment in which he and the younger Julian Assange grew up in Queensland, Australia during a period of repression when civil liberties were suspended, something Assange has referred to in court. Both Assange and Manning face the prospect of life or death in prison and we have to find ways - meetings like this, posters, flyers, speaking up, acting up - whatever ways we can to sustain solidarity and support for them.

The 60+ people attending the meeting then made their way back to the hall for more refreshments, more entertainment from the Bow Creek Ramblers, networking and relaxing before heading back to our various bases to continue and spread the campaign to free Bradley Manning and end the war.

Since the meeting, it has been announced that Bradley Manning will be moved to a military jail at Fort Leavenworth in Kansas. Two of the three US Catholic Workers who spoke at this meeting are based in CW communities not far from this base and will be active in the ongoing resistance in the US to Bradley Manning's detention.

How to get involved in the campaign

To find out what's going on and to get involved in the Welsh, Irish, Scottish and English network of campaigning for Bradley Manning, send an email to: wiseupforbm [at] yahoo.com, stating whether you would like to join the discussion and action planning list (busy junction with sometimes high volume of traffic) or the announcement only list (low volume of one way traffic), a name and the email address you would like to be subscribed to the list (for the busy list, this should be the one you'll be posting to the list from, or your messages will get held up for moderation).