The Battle of Stokes Croft (Updated)

An eye-witness of last nights event, which is now being referred to as 'The Battle of Stokes Croft': The police tactics were unfathomable. They seemed to consist of running from one end of Stokes Croft to the other (and up several side streets), randomly charging about the place, getting more and more people involved and moving the violence into new areas that had previously been quiet. Needless to say, the ‘active’ (ie. rioting) members of the crowd simply avoided the charges and filtered around to attack the police all over again from a different angle. The police helicopter flew low overhead constantly from 9pm to 4.30am, beaming its searchlight on anyone and everyone. This was not a tactic to win any ‘battle for hearts and minds’ either. Full article 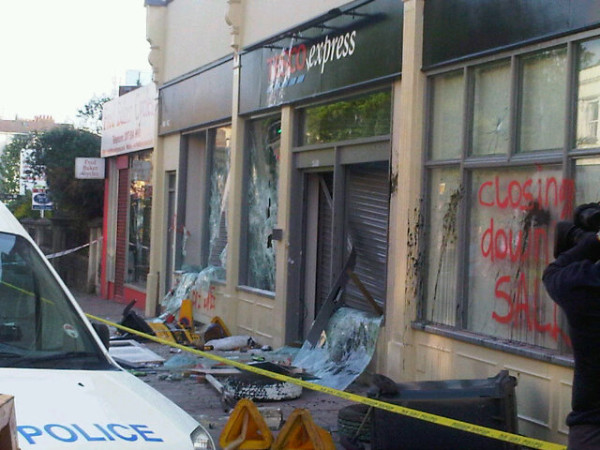 A larger article - The Battle of Stokes Croft has just been published here:

Tesco has been trying to move in to stokes croft for over 2 years and has been unable to because of huge protests. They have had to move builders in under police escort and have 24 hour roof top private security. Last weekend Tesco opened and there have been non stop protests all week.

When I arrived the police would only tell me that I could not enter stokes croft for my “health and safety” and that it was to do with Tesco. Asking around there were various different explanations. Most people said that the police were raiding protesters houses throughout stokes croft. We could see across the police line approximately 10 riot vans and a riot squad entering the famous “Telepathic heights”. A house, like a lot in the area painted from head to toe in murals. One mural on the side of the block reads “No Tesco in Stokes Croft” in huge letters. Stokes croft is known in Bristol as the cultural quarters and spans only a few thousand square feet of concentrated cultural activity not dissimilar to Camden in central London.

At something like 10PM a huge crowd landed on the front of stokes croft drawn by the lowflying helicopter with spotlight and the army of police emerging from 12+ riot vans dressed for combat. Pretty soon tension peaked as no explanation would be given for the roadblocks and there was intimidation on both sides... Full Article

The uneasy face-off between protesters and Police at the newly opened Tesco's on Stokes Croft erupted tonight in open violence and confrontation. 7 Ambulances and their Paramedics had to attend to take away the casualties. A spokeswoman for Avon & Somerset Police said 20 people had been arrested for Public Order offences and Criminal Damage...