Anti-nuclear activists from Cheshire and Wrexham marked the 25th anniversary of the Chernobyl nuclear disaster today with a stall at the Cross in Chester. Information on the stall included leaflets about Chernobyl, nuclear power generally, government plans for the geological disposal (burying in the ground) of nuclear waste and the links between the civilian nuclear power industry and the military use of nuclear technology, which takes the form of indiscriminate weapons of mass destruction, a threat to the existence of all life on this planet. 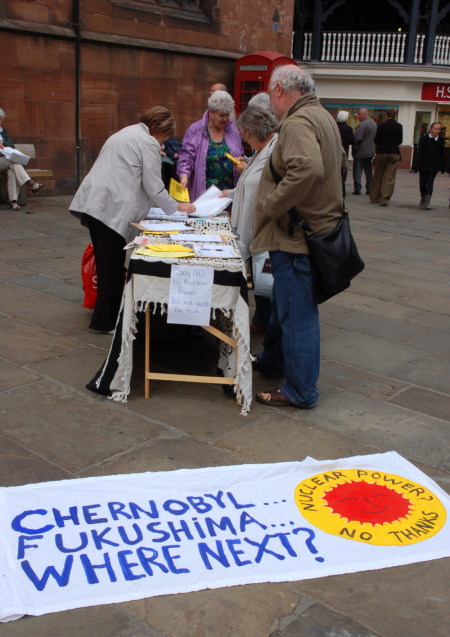 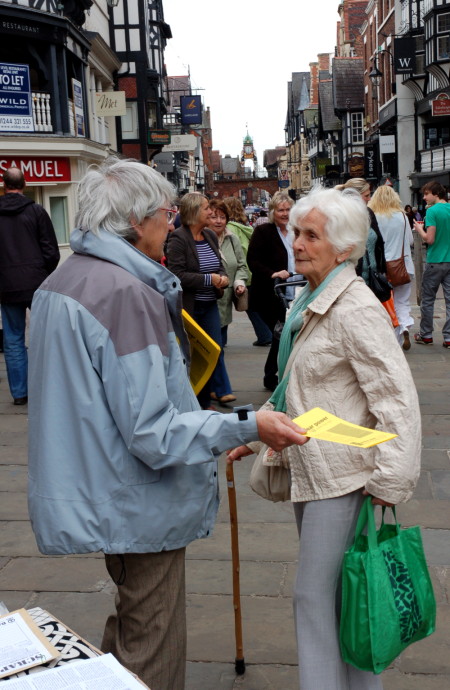 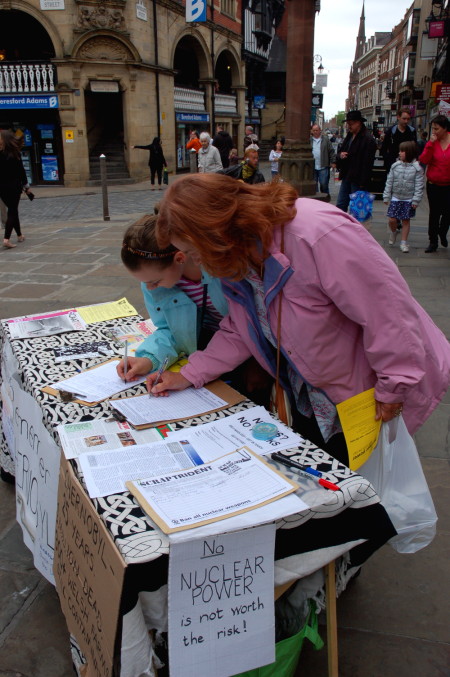 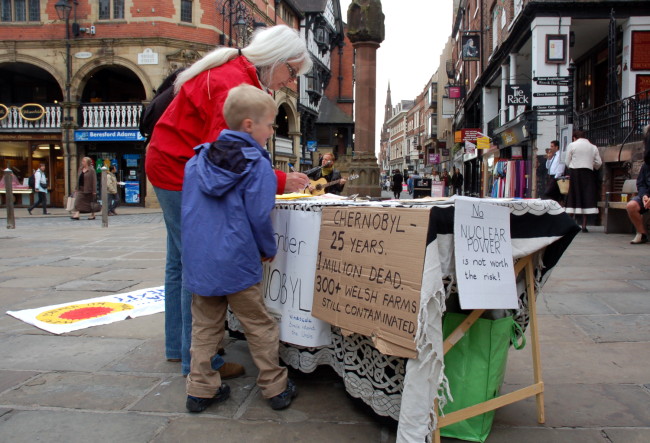 Leaflets prepared to hand out at this event stated: "Today is the 25th anniversary of the Chernobyl nuclear reactor disaster. Its consequences may last for hundreds, possibly thousands of years. [The disaster] will continue to take lives and cause pain for as long as the radioactive paricles that were forcibly expelled from the nuclear reactor on that day have any strength. Those emissions went round the world. To the surprise of many they reached Britain after several days. Nuclear radiation lacks visibility. You cannot feel it, hear it or smell it. For that reason it is out of sight and out of mind."

It is estimated that at least one million people worldwide have died as a result of the Chernobyl accident(1). In the years following the disaster, thyroid cancers in the surrounding populations, especially amongst children, increased dramatically, in some cases the increase is thought to be as much as tenfold(2). Closer to home, over 300 Welsh farms remain contaminated and restricted 25 years on(3).

Many passers-by came up to the stall to discuss their views on nuclear power and nuclear waste disposal. Most voiced strong opposition to plans for new nuclear power stations and signed a petition from Cumbria against the burying of nuclear waste. A small minority, however, stated that they felt nuclear power was a 'necessary evil', 'the best solution in our current situation' and 'worth the risk to keep the lights switched on'. All claimed to be passionately concerned for the environment but with no apparent interest in reducing power consumption to render the small amount of our total power needs supplied from nuclear power redundant. Clearly, they take too much notice of James Lovelock, George Monbiot and BBC propaganda.


(1) “Chernobyl: Consequences of the Catastrophe for People and the Environment,” compiled by authors Alexey Yablokov of the Center for Russian Environmental Policy in Moscow, and Vassily Nesterenko and Alexey Nesterenko of the Institute of Radiation Safety, in Minsk, Belarus. Pub: New York Academy of Sciences, 2010.